Sign of the Times: How to Make Pittsburgh Welcoming for All

"Racism in Pittsburgh is real. Racial inequality is real. The playing field is not level." 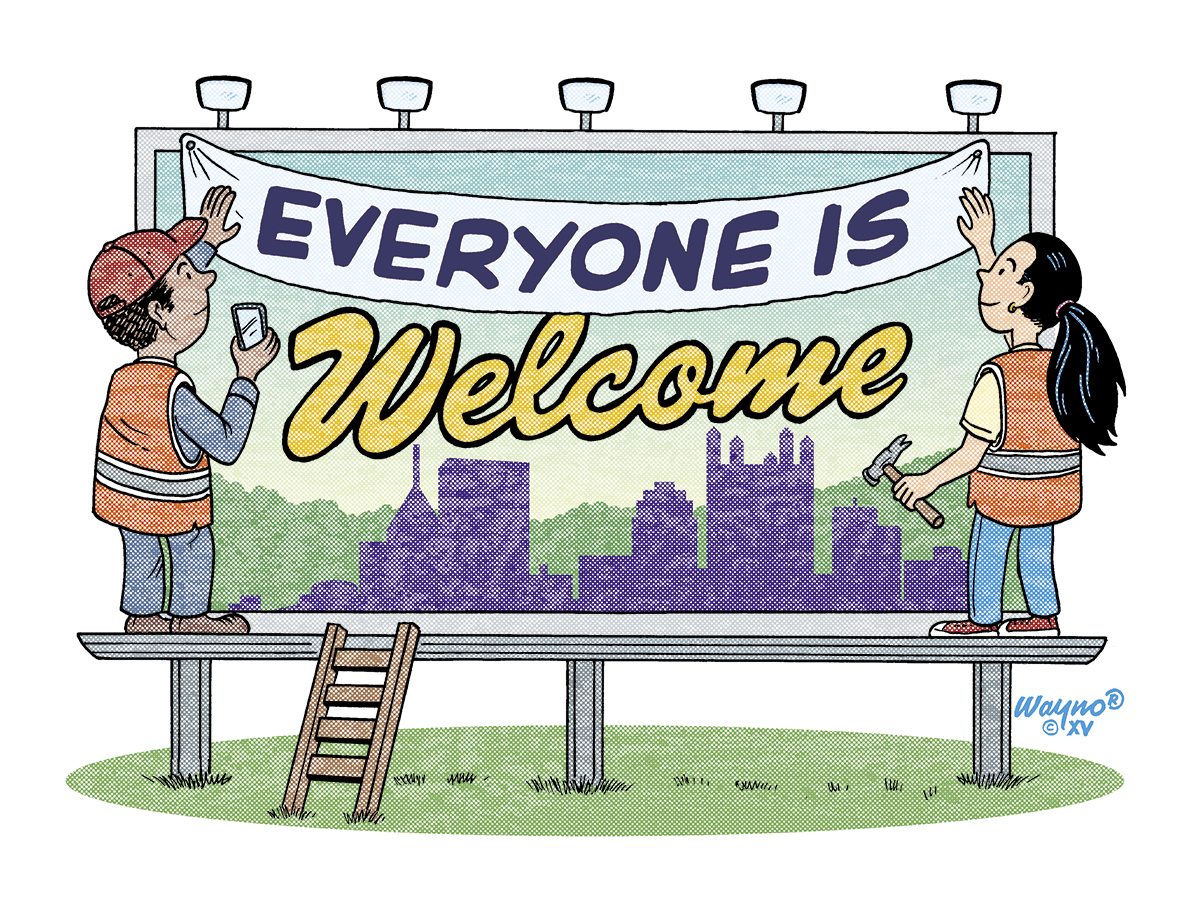 Reading comment sections on the Internet is like digging to the bottom of your refrigerator’s vegetable drawer to investigate a foul smell: You honestly don’t want to look because — although you never know exactly what you’ll find there — you’re 100 percent sure you’re going to be totally disgusted by it.

That is the truthiest sentence I have written in a long time, and you know it and want to high-five me for it.

YouTube comments possibly are the most atrocious subset of the Internet. Small-minded lecherous keyboard warriors with bravado afforded only to the anonymous are capable of turning the comment sections on the most well-intentioned videos into a veritable wasteland of written filth.

The comment sections on news stories are a completely different, teeth-gnashing, feral animal. They showcase the Web-surfing underbelly’s penchant for taking any topic and twisting it in all of the right places to force a thought-pretzel that will connect to whatever issue the writers have hung their virtual hats on — fracking, the “wacko right,” the “decency-destroying left,” taxes, Barack Obama’s birth certificate … Donald Trump’s entire existence on this planet (why, God, WHY?!).

“This article about the beaches of Cuba is very well-written. Also, WHAT ARE WE GOING TO DO ABOUT DONALD TRUMP?!”

Comment sections on the local news’ online outlets are no better, unfortunately. This past summer when there were unruly crowd incidents at Monroeville Mall and Kennywood involving black teenagers (I point this out for a reason you’ll come to understand in the following paragraphs), some of the comments and tweets were putrid. Horribly racist things written with an air of superiority that should be reserved only for legitimate, miracle-working, Nutella-inventing supreme beings.

Though the comments bothered me, I was able to brush them aside as the maniacal rantings of the Internet’s bottom-feeders. What I couldn’t brush aside were some news reports’ chosen verbiage … “groups mostly made up of black teenagers.”

Where is the “havoc caused by mostly whites tailgating the Kenny Chesney concert” verbiage? Or the part of the story that says, “A group of mostly white self-proclaimed ‘anarchists’ destroyed storefronts in Shadyside last night?”

We don’t read that because apparently that road mostly runs one way.

Racism in Pittsburgh is real. Racial inequality is real. You don’t have to spend a decade working for minority-supporting nonprofit organizations as I did to see that. I could call up countless statistics from the University of Pittsburgh School of Social Work’s exhaustive research that will prove it without a shadow of a doubt. The playing field is not level.

My husband is Mexican by birth and a U.S. citizen by naturalization, yet he gets sidelong looks when he’s speaking Spanish at the local diner. He was shouted at to “go back to Mexico!” while walking and chatting with his brother — and they weren’t wearing sombreros or anything! They reserve the wearing of those, and Steelers-themed serapes, specifically for Steelers home games. (¡Yoi! is Spanish for Yoi!)

The New York Times’ recent vlog post about spending 36 hours in Pittsburgh didn’t feature a single person of color, and we wonder why minorities don’t feel included in the new Pittsburgh.

Perhaps it’s too late to encourage change to the racism we might encounter in pockets of the older population. But the younger population — those of us who aren’t yet of retirement age, those of us moving and shaking the city, forging her new identity and building her into a worldwide powerhouse — must absolutely look at our prejudices and make every effort to stamp them out, realizing we cannot feel superior for being born with a certain ethnicity.

Growth will come from inclusion and immigration … from REAL diversity, not class division. A richness in our way of life also will result. Recently, I sat in the sunshine enjoying a taco from a stand in the Strip District. My husband chatted in Spanish with the owner. A group of customers spoke in Hindi. A couple next to me conversed casually in a language I couldn’t place.

It was a beautiful, perfect moment in the sun and the kind of moment we must not just welcome but ACTIVELY DESIRE for our city.

Media, think long and hard before you start classifying groups of news subjects by race. Pittsburgh, look racism in the eye and then support the programs and organizations that will carve out a city that includes every person who wishes to be included.

He is banned for life.

This article appears in the October 2015 issue of Pittsburgh Magazine.
Categories: From the Magazine, Hot Reads, PittGirl