Sidney Crosby is the Biggest Man in the Room

The world's best player has changed hockey forever simply by doing nothing at all. 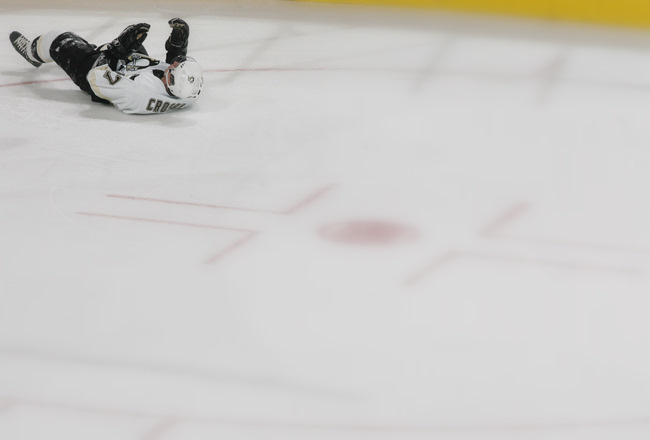 You spend most of the day just trying not to pee your pants. This is the global experience for anyone who loves hockey, whether you are an NHL player or a lawyer or some guy in a Kevin Stevens jersey and a nacho helmet.

This is the waiting game. The terrible wind-up. The waning hours that crawl by as the sun goes down and your heart rate soars and you think about the sound a puck makes when it falls from the hand of a referee and whip-crack snaps on fresh ice.

For the past 318 days, for the past 7,600 hours, the world’s best hockey player has been stuck with this rut in the pit of his stomach. It must have felt like the world’s longest case of sleep paralysis. Crosby could open his eyes, he could even lace up skates and dangle pucks on a string. But once 7:30 rolled around and the quiet tension leaked into the locker room like a wave of humidity before a thunderstorm, Crosby could not move. He was stuck in cement.

No one on earth loves hockey more than Sidney Crosby. This is a man who celebrates winning a Stanley Cup by putting up the trophy as collateral in a street hockey game. For the past 10 months, he did something that will be subconsciously remembered by youth hockey players around the country long after his number 87 is in the rafters.

He did nothing at all.

The game’s best player made a choice to step away while he was, quite literally, at the height of his powers. He sat in the press box while his team was a Cup-contender. He answered the same question 700 times. He smiled as ridiculous rumors of a brain tumor, then a fractured skull, then a conspiracy to spite the league circulated the lower reaches of the interwebs.

His physician through this terrible ordeal, Dr. Micky Collins, told me in July that the most concerning issue regarding concussions today is not the injury itself, but education. Collins' biggest challenge is getting players in the door of his office in the first place. Too many rush back from a concussion too soon, or simply ignore their symptoms.

We now know the consequences. Memory loss, skull-rattling headaches, the world tilts off its axis with dizziness and neurological scores drop from the 90th-percentile to the 30th. Professional hockey players stop scoring, or hitting, and they get attention right away. Our kids, though, no one notices until they fail their third-straight Algebra test.

As we so unfortunately learned in the wreckage of the Penn State tragedy, there is so much more to masculinity, to strength, than being the baddest man in the Colosseum. Most often, a person’s courage is truly put to the test when no one is watching. Say, when they witness something unspeakable in a locker room.

Hockey is a frozen island. Its inhabitants retain old-world values. It’s charming in the way that Archie Bunker at the piano is charming. It is a place for big beards and completely legal, completely sober fist-fights, and four-letter words that sound like poetry, and most of all, it is home to the kind of masculinity that we tell ourselves doesn’t exist anymore.

But we’re all looking in the wrong direction. We witnessed true grit, and it wasn’t Chris Pronger returning to the ice three weeks after a puck imploded his eye socket. That’s toughness, sure. But what Crosby did by sitting out for 10 months, letting the storm clouds of criticism gather over him, letting the shadow of the restless media scrum grow ever-larger, absorbing the chorus of hockey’s most damnable slur, pussy, is a rare sort of courage that will change an entire generation of hockey players.

How many youth hockey players’ careers did Crosby save by handling this mysterious, invisible injury with uncommon patience and intelligence?

Whatever happens during the rest of Crosby career, even if he forgets how to shoot and never lifts us out of our seats with another unconscionable goal, he has advanced concussion-awareness and management by a decade. Like Mario Lemieux, Crosby will be remembered just as much for his character off the ice as his mastery on it.

From Crosby, to his coach Dan Bylsma, to the entire Penguins’ organization, everyone involved in handling the brain of Sidney Crosby showed the kind of courage and masculinity that we don’t often talk about anymore.

Tonight, after 7,600 hours of waiting, it’s finally a hockey night in Pittsburgh for Sid the Kid. Let’s celebrate by striking that nickname once and for all. Sidney Crosby is a man apart.