Shower Guide: How to Throw The Perfect Party

A bridal shower is about celebrating and preparing for the next step in your life with friends and family. We asked local wedding planners to provide examples and tips for traditional, modern and themed showers, as well as ways to ditch the shower completely.

PHOTOS BY ALL HEART PHOTO & VIDEO

There’s a fine line between classy and cliche when it comes to planning a themed shower. Shayne Souleret, owner of Soiree by Souleret, helped one bride strike that perfect balance.

Example: Aimee DiAndrea was engaged to Chef Dave Anoia (the pair own DiAnoia’s in the Strip District), which inspired her chef-themed shower in the fall at a warehouse space in East Liberty. Guests were served an artistic, fine-dining experience with mini quiches, artisan bread and cheese, French pastries for dessert and an elderflower lemonade drink, as well as wine options. Grapes, beans, tomatoes and other vegetables were incorporated into centerpieces. “We were able to incorporate the theme in small ways without it being too cheesy or overwhelming,” Souleret says.

When and Where: With the right decorations, you can turn any venue into a space that reflects your theme, but Souleret recommends keeping it simple so that the space is beautiful as well as cohesive.

Tips from the expert: Souleret suggests that when choosing a theme for the bridal shower, try to find one that embodies your relationship. Whether it is something you enjoy doing as a couple, something that tells the story of how you met, or something related to your lifestyles, such as occupations, the theme should incorporate meaning. 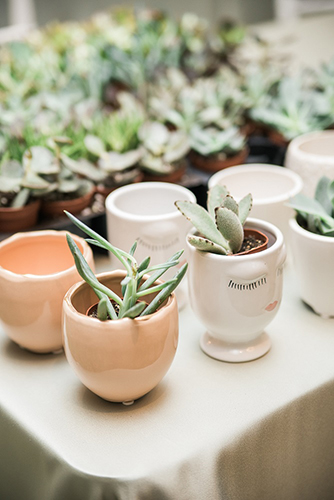 Although you grandmother may have served mini-sandwiches and tea at her bridal shower, there are plenty of new-fashioned ways to incorporate traditional concepts.

Example: Cousins Nettie (Moore) Mercer and Maura (Donley) Rheingrover celebrated their wedding showers together with a garden-themed, traditional shower with personal touches. Hosted by their mothers on July 22 at Laurel Valley Golf Club in Ligonier, the shower featured signature cocktails served with custom cocktail napkins picturing the cousins’ favorite chef personality Ina Garten. Guests were served mushroom soup, romaine salad with poached pear, walnuts and grilled chicken with a citrus vinaigrette, and peach cobbler for dessert with coffee and tea. Party favors included a succulent of choice, to complement the garden theme, and artisan popsicles from Popsburgh in an embroidered, keepsake cooler bag that read, “To have and to hold and to keep your snacks cold!”

When and Where: “A lovely country club is always a perfect choice, as well as private rooms at traditionally decorated restaurants and hotels,” says Sheila Weiner, owner and president of The Event Group. “A traditional shower can be held at nearly any time of the year, depending on the wedding date and the shower’s theme and setting.”

Tips from the expert: Keep the food and activities simple, yet tasteful, Weiner says. The menu should be amenable to a range of palettes, and activities, perhaps a flower or succulent bar, should not be too time- or labor-intensive for guests. 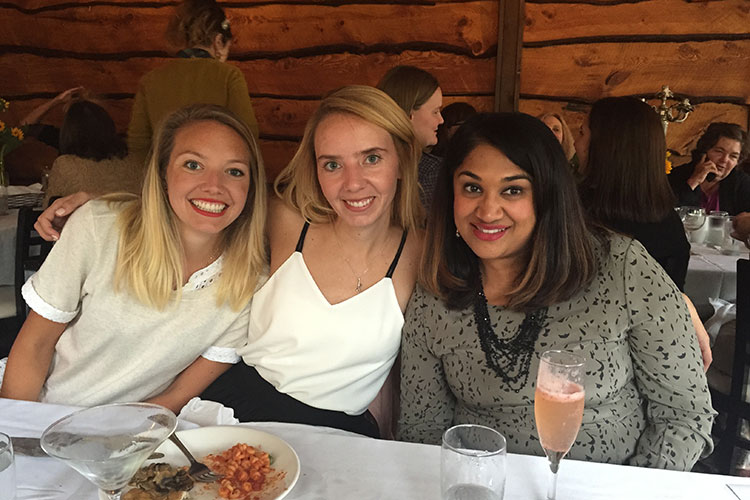 Not interested in the shower at all? Ditch it and plan another celebratory activity instead, such as a cocktail hour.

Example: Dr. Maggie Brannigan was not looking forward to having a bridal shower at all; she was not interested in the idea of brunch with her friends followed by games and opening gifts. Knowing this and considering her love to party, Maggie’s aunt threw her a cocktail hour in October 2015. “Martinis with Maggie” was held at Arlecchino, a small Italian restaurant in Canonsburg. Maggie and her fiancé, Kevin Thieman, enjoyed martinis and fried Italian food with their friends and family. Because the couple already had plenty of home goods many brides-to-be receive at their showers, they instead registered for Honeyfund, an online wedding registry for funding honeymoons, trips and other activities.
When and Where: Whether it’s throwing a cocktail party at a bar or restaurant or grabbing a quick bite to eat in between activities, the possibilities are really endless.

Tips from the expert: Skipping any sort of planned celebration is an option too. Souleret says having a girl’s day, such as a mini trip or a spa day, dedicated to the bride-to-be is a great alternative for a bridal shower and any of the party planning that comes with it. Some brides also choose to make a donation or spend a day volunteering with their wedding party instead. 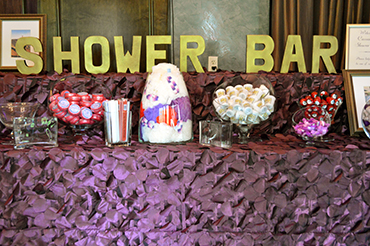 If you’re looking to get away from the more traditional concepts, Weiner has recommendations for modern shower planning.

Example: Cassandra (Harper) Hetherington’s shower was held at Perlé, the Champagne bar in Market Square. The day included a Champagne tasting; a shower bar, where guests could take home small versions of shower essentials; a tea bar, where guests could blend their own loose leaf tea; and a sugar scrub bar, where guests could create their own sugar scrub. All items had custom labels that matched the shower’s color palette. Lunch and cocktails were served among florals in mercury glass vessels. An array of desserts from Bella Christie & Lil’ Z’s Sweet Boutique also reflected the color palette and “bubbly” Champagne theme of the shower. Weiner says sticking to the theme is always a nice touch.

When and where: Weiner says the best spots for this type of event include “unique restaurants with private event spaces, or somewhere that you can execute your vision for the theme and touches that will make the shower modern. Often the type of modern or non-traditional shower you are looking to have will help to dictate the venue as well as the time of year or date. In general, showers are held several months prior to the wedding date.”

No matter what type of shower you plan to throw, there are general “guidelines” that should be considered. From planning the shower to thanking the guests, here are some planning experts’ do’s and don’ts:

This article appears in the February 2018 issue of Weddings.
Categories: Bridal Buzz