Should You Sing a Song Right Now?

Before you put your name in at karaoke night, a few simple questions. (Plus a recommendation for one of the most fun anyone-can-sing experiences in town.) 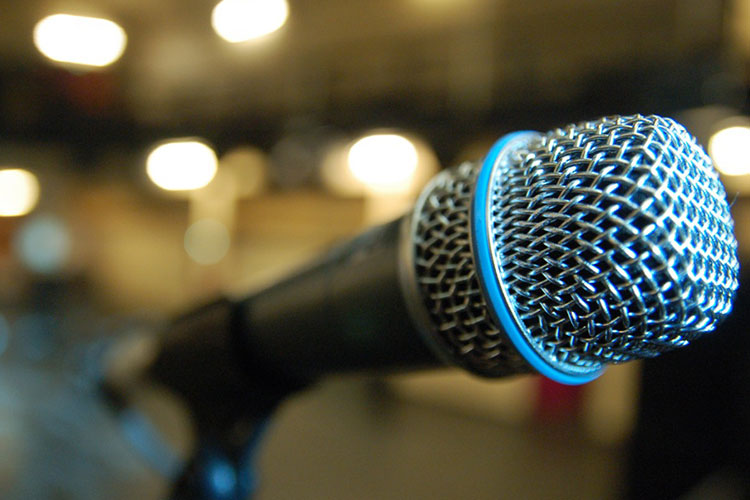 Yes, you’re right. That is a microphone up there.

There’s a slightly tired-looking fellow standing behind some DJ equipment. There are massive binders listing song titles being passed about the room. Groups of young people are discussing the merits of the Barenaked Ladies’ novelty hit “One Week.”

You have correctly interpreted these signs. It is karaoke night. And you could go up there and sing a song.

The pivotal word in the previous sentence is: could. You could do it. Nothing is stopping you. But, to paraphrase “Jurassic Park,” you may be so preoccupied with the fact that you could that you haven’t stopped to think if you should.

It may be a dreadful idea.

Not for you, though. You'll have fun. You’ll be nervous, you’ll giggle and make it through many of the key lines of “Poker Face” and then you’ll return to your table. But there’s the rest of us to consider. Will we be glad you’ve claimed that microphone for a few minutes? Will our night out be enhanced by your spirited interpretation of a megahit from yesteryear?

I have four questions. Just four. If you answer yes to the following, you may sing. And if you make it through these queries, I’m going to offer my personal karaoke-night recommendation at the end of this post. But for now — the questions.

1) Can you sing?
Look, I mean this in the broadest possible terms. I’m not looking for Sinatra to take the stage at the corner bar; I know that karaoke night is for everyone. I’m simply asking if you can carry a tune. Can your voice strike notes fairly consistent with those in the song you’ve chosen? If, after an honest accounting of your sonorous prowess, the answer is no, please: Do not participate in karaoke night. Look, plenty of bars have acoustic open mic nights, but there’s an implication that the folks taking the stage on those occasions can at least play the guitar. Karaoke night is no different.

2) Have you selected a song that will be familiar to the people in this bar?
Knowing one’s audience is the core of most creative endeavors, after all. And yes, I’m just as amused as you that this karaoke joint offers the lesser singles of late-90s alt-rock footnote Fastball! No, I haven’t heard “Fire Escape” in quite some time, either! But neither has anyone else. And they’ve all forgotten it. So sing “The Way,” if you’re going to the Fastball well. The reason: We want to cheer you, karaoke star. We want to be amused by your performance. And a key part of karaoke appreciation is the moment of recognition when the crowd recognizes the tune you’ve selected. A further note: This also requires you to know what part of town you’re in. There are karaoke nights where dusting off your favorite Brooks & Dunn single will earn you a round on the house, but I’d stick to the rockers in Lawrenceville.

3) Are you wasted?
Now, far be it from me to suggest that karaoke is a sober endeavor. Impassioned performance and alcohol are often good bedfellows. But there’s a law of diminishing returns, there. After two or three drinks, you will probably hit your pop-star sweet spot, uninhibited enough to reach for those high notes and throw in a sassy dance move or two. Much past that, and you’ll quickly reach the point where you’re going to be forgetting the words to the song even as you read them on a screen 3 feet from your face. At that point, your options are to perform Doors songs — that law of diminishing returns absolutely does not apply to Doors songs — or remain seated.

4) Do you actually want to sing a song?
Let’s leave the microphone to a coalition of the willing, shall we? This may be more a rule for your peers than for you, but it’s an important one: Sing if you want. Sing if you like singing in front of strangers. If your friends are goading you into signing up because the whole group is doing it — and you actually have no inclination to perform — tell them to shut the hell up and by the way maybe don’t pick a Spice Girls song tonight, it was cute the first time but really now.

Now — did you pass the test? You can sing, you’ve picked a proper song, you can still see straight and you actually crave the stage? Then sing! Sing your heart out. Look at the crowd and not just the screen, throw in a vocal flourish here and there and belt with pride.

As for the location: The drink specials and song choices are always my first questions when it comes to a karaoke night, but I have to endorse a somewhat unconventional choice. Live Band Karaoke at Bloomfield mainstay Howler’s is just what it appears: a karaoke night where the pre-recorded tracks are replaced with an actual band of musicians. Here, you’re not just a singer, you’re fronting a honest-to-god lineup as they tear through a classic.

Now, the event was until recently called “Punk Rock Karaoke,” and the group has only added so many tunes outside of the genre. So fans of the fast stuff will have plenty of choices — Ramones and Misfits aficionados, you will be thrilled — but beyond that, the set list is a bit limited. The selections are posted on Facebook, though, so you have time to prepare for your moment at the mic.

The next installment is set for this Friday night at 9:00ish. Be bold. Sign up and rock out.

If it’s actually a good idea for you.