Three couples and a local wedding planner share some guidance on how to make one of the most important decisions for your big day — selecting a location. 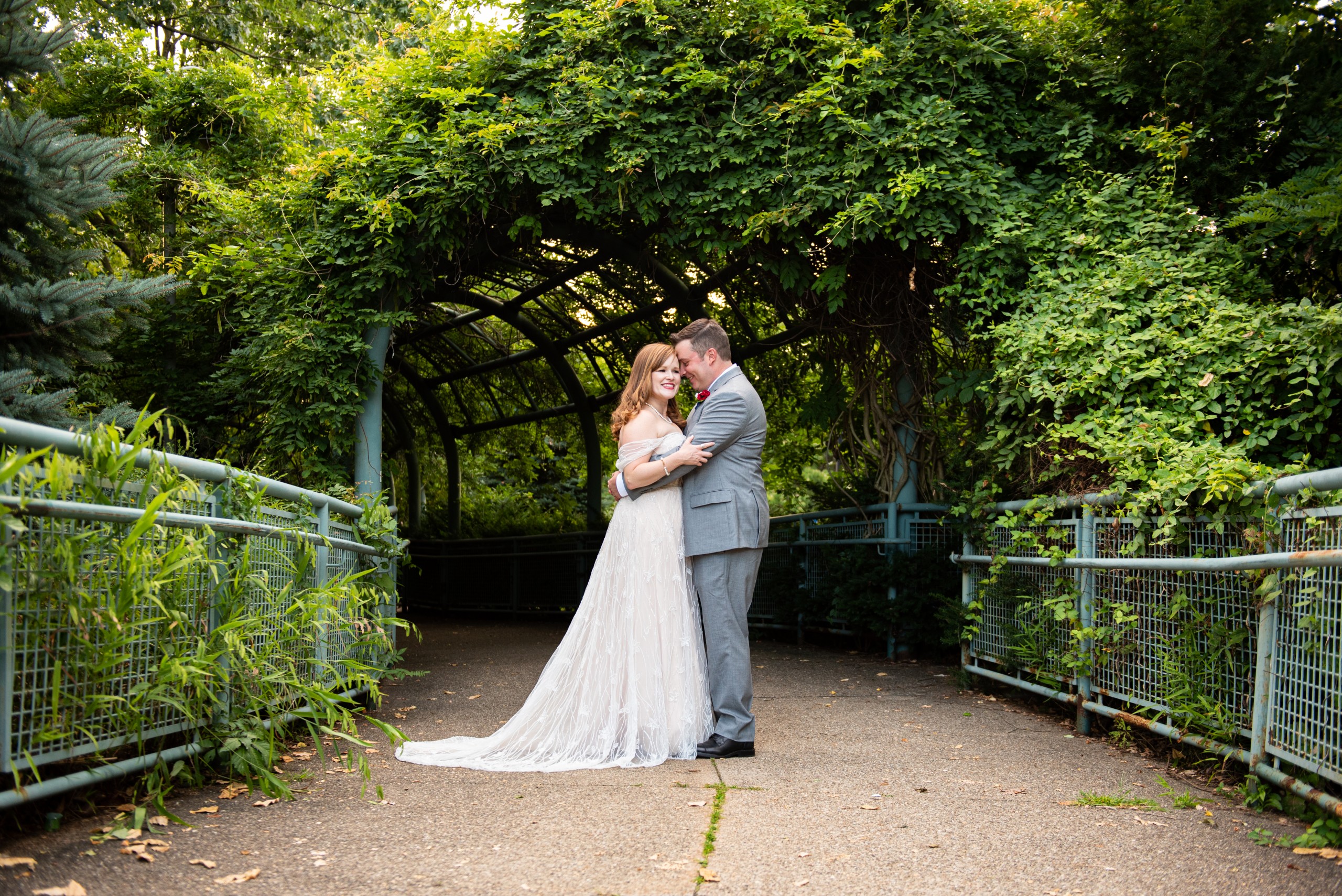 Choosing a location is one of the first things a couple does when they plan their wedding, but the options can be overwhelming. Even once you think you’ve found a perfect venue, you have to decide whether you’ll hold both your ceremony and reception there.

How can you choose? Pittsburgh-based wedding and special event planner Jessica Transue of Jessica Elyse Events says there are a few major things that every couple should consider.

“It really depends on what their values and interests are as a couple,” Transue says. “But when picking out a venue space, I always try to consider the distance and travel time, the accommodations and how flexible they are, and if they have a back-up for your ceremony if they’re outdoors.” 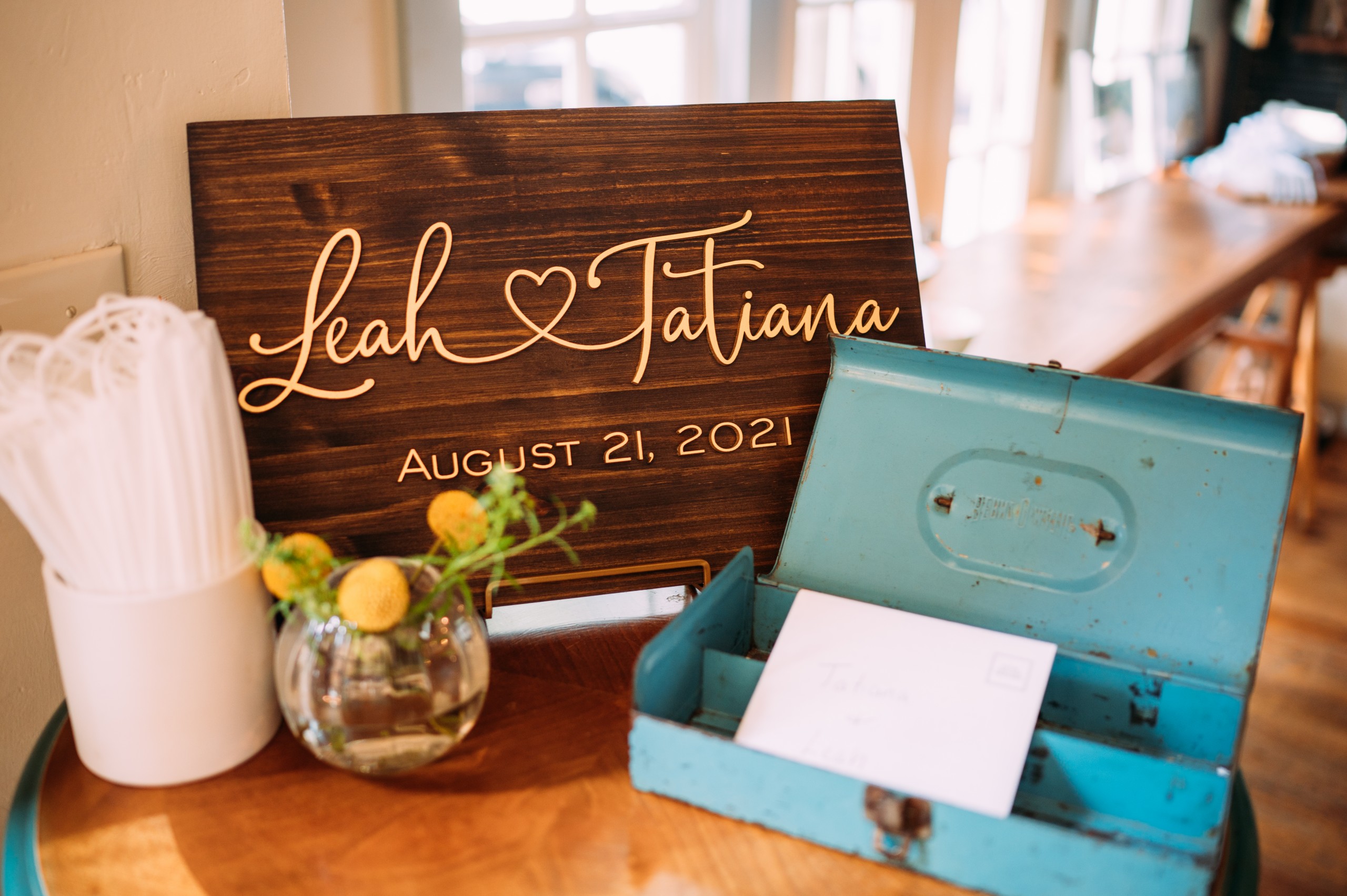 Leah Klocke and Tatiana Pomerantz decided to have their entire wedding celebration at one location, Point Breezeway in Point Breeze. They married on Aug. 21.

“[Holding both the ceremony and reception there] was part of the wedding package with Point Breezeway, which was really nice,” Leah says, “especially since we had so many people coming in from out of town.”

Leah feels that it made her wedding schedule much more flexible, allowing her and Tatiana to spend more time enjoying themselves.

“It was less logistics without trying to get everybody rides and directions and everything,” Leah says. “What was really nice too is that we got to spend the entire afternoon and early evening with people. … We liked being able to spend time with our guests as opposed to transporting ourselves and all of our staff between different venues.” 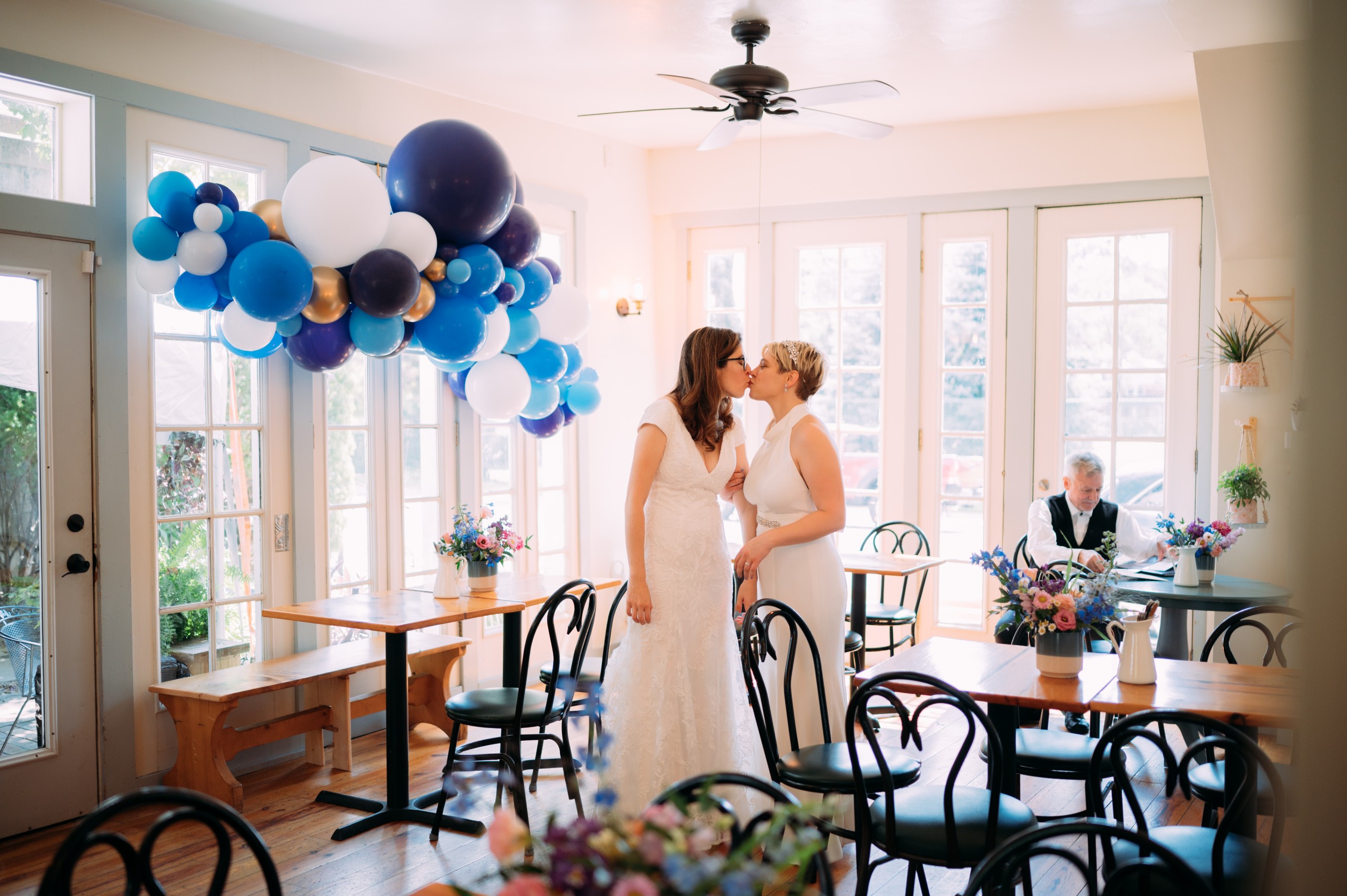 Transue says this is one of the biggest advantages of hosting your ceremony and reception at one venue.

“There’s no time gap, so everything is pretty seamless from the guests’ perspectives,” she says. “Most times, more people will attend because it’s more convenient.”

Madison Donovan and Tyler Davidson, however, decided to opt for two venues for their ceremony and reception on March 13. They held their ceremony at B.F. Jones Memorial Library in Aliquippa. 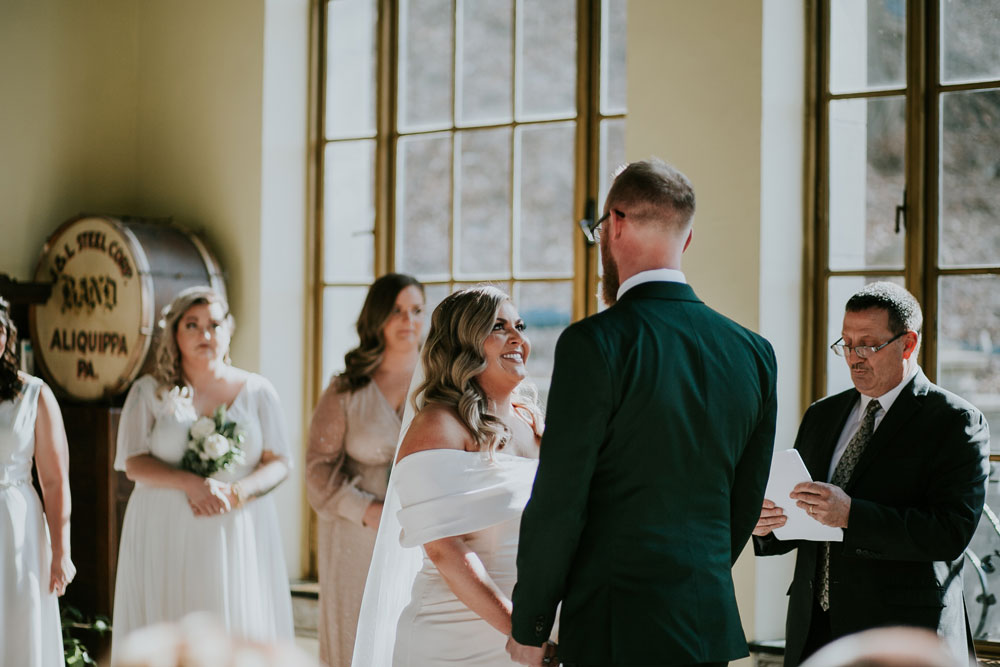 “It’s seriously the most breathtaking place,” Madison says. “It has the biggest windows I’ve ever seen, and the books and the marble, and everything else about it, was just beautiful.”

They learned that their family had a personal connection to the library as well, which solidified their decision to hold the ceremony there.

“After the fact, we realized that it was built with money from a steel company that Ty’s grandfather actually moved here for,” Madison says. “His grandfather passed away before we met, and he was always just so, so close with his Pap. He was almost like a dad to him, so it was cool that was part of it.” 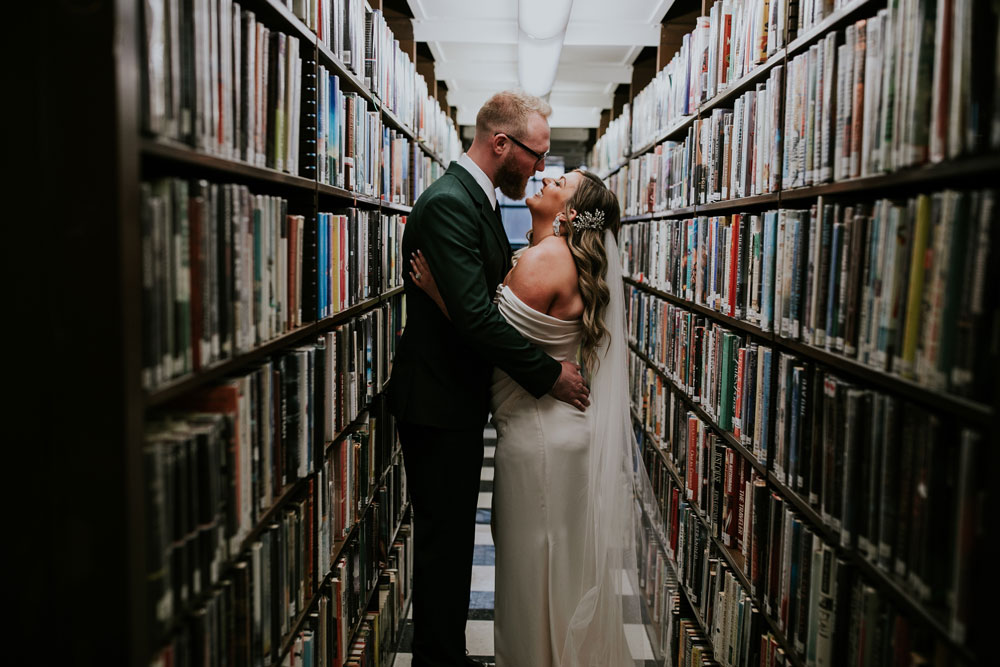 The Davidsons’ reception was the first to be held in Shermichael Woods’ new outdoor wedding space in Aliquippa. The couple wanted an outdoor venue for their reception because they planned on inviting more guests than they had at the ceremony due to COVID-19.

“I just truly didn’t feel comfortable with having a lot of elderly loved ones there that I knew wouldn’t miss it,” Madison says. 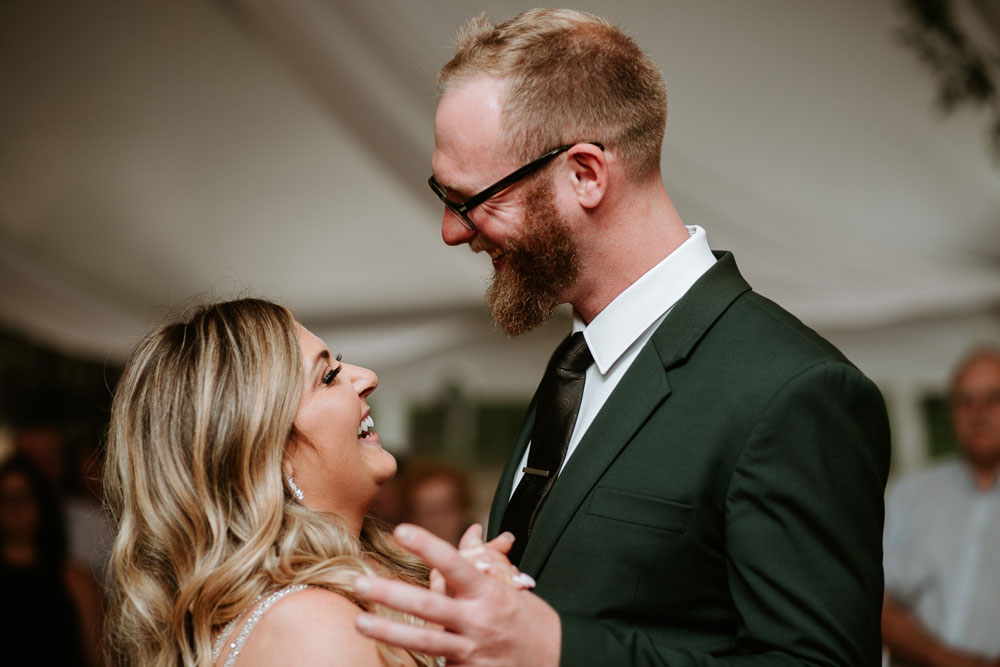 Transue says it can be nice for guests to experience multiple spaces.

“It changes the scenery, especially if you have a lot of out-of-town guests or people who aren’t familiar with the area,” she says.

It can give couples and their photographers a more flexible schedule, too.

“If a couple wants to attend their cocktail hour [with one venue] that most likely won’t happen because you only have about an hour window to get all those pictures taken,” Transue says. “[Two locations] would give them enough time to hopefully refresh and attend their cocktail hour if they wanted to, too, which in turn cuts down the time that they have to greet guests during the reception … and they can actually enjoy dancing after dinner.” 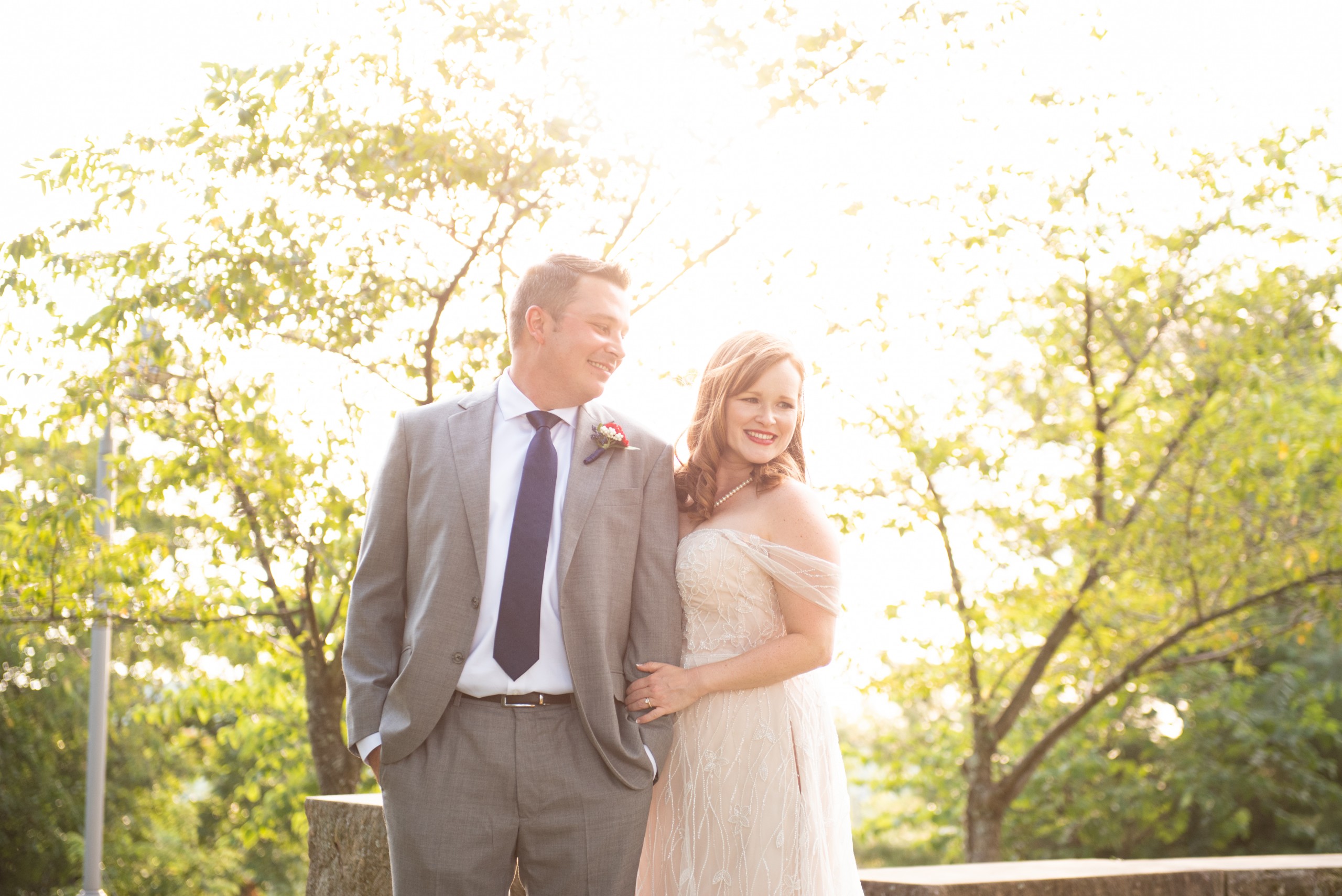 Rachael Dudzic and Steve Troglio chose two venues for their wedding on Aug. 14, 2020 because of this. Their ceremony at the West End Overlook provided guests with a view of the city skyline, and their small reception dinner at an AirBNB in the Southside Flats gave them the chance to talk to everyone.

“There was some really pretty scenery [at the West End Overlook]. It was also pretty accessible,” Rachael says. “And at our dinner, my brothers got to sit and talk to my father-in-law, which probably wouldn’t have happened if we had this big huge wedding, so just being able to sit together and enjoy a meal and really spend that time together was special.” 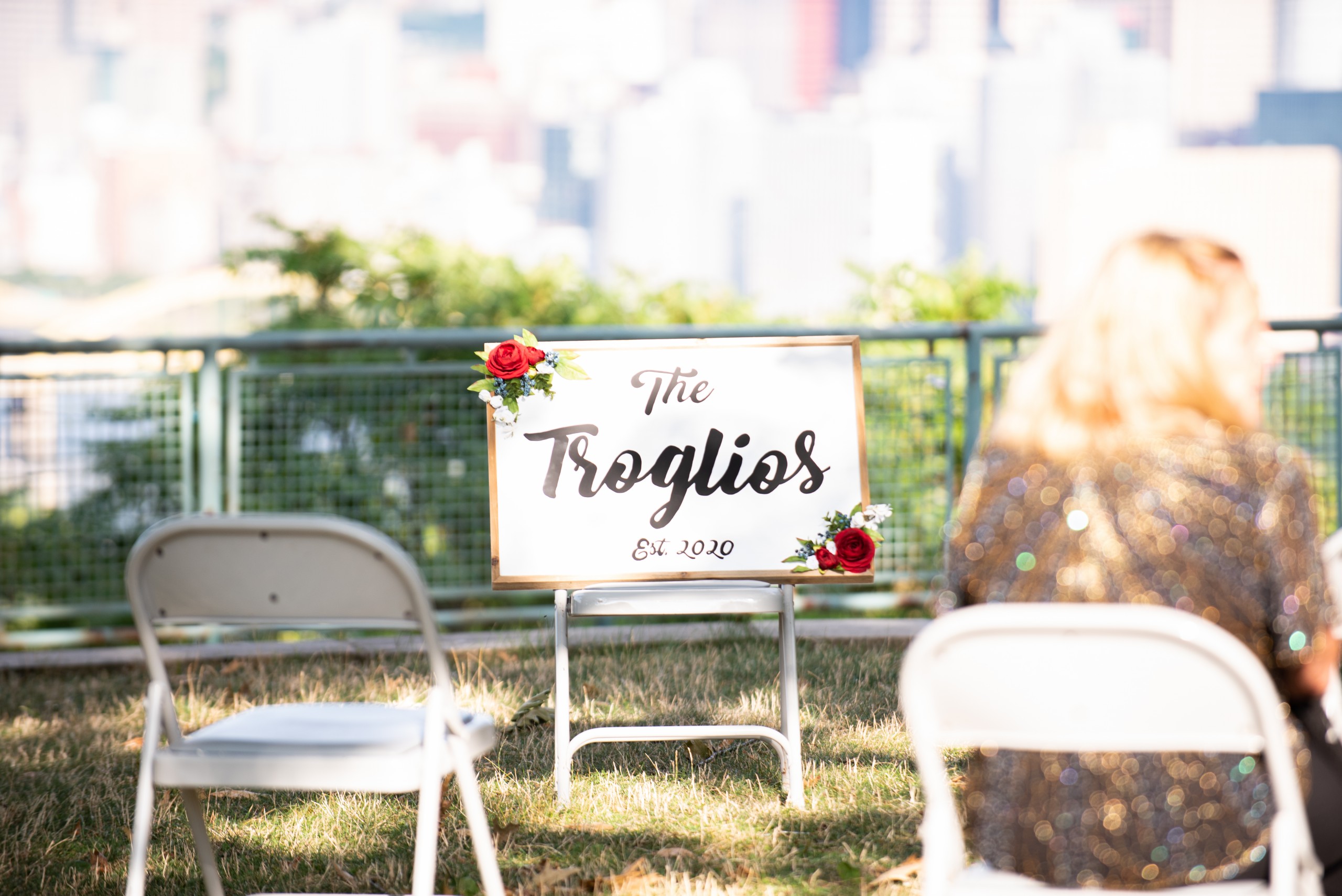 The Troglios originally wanted to host a large wedding on New Year’s Eve but changed their plans after the pandemic. Rachael wants other couples to know that even obstacles like COVID-19 can’t ruin their special day, no matter what venue they choose.

“When you’re planning your wedding, just in general, really focus on what you and your future partner want out of your day, and remember that it is about you and your partner,” Rachael says. “It’s important to be flexible and remember what the day is really about.

“I was, of course, disappointed that we didn’t get to have the big New Year’s Eve wedding that we had originally planned, but in the end, we had this beautiful, unique special day that we wouldn’t have had if COVID hadn’t happened. … And I wouldn’t trade that.”