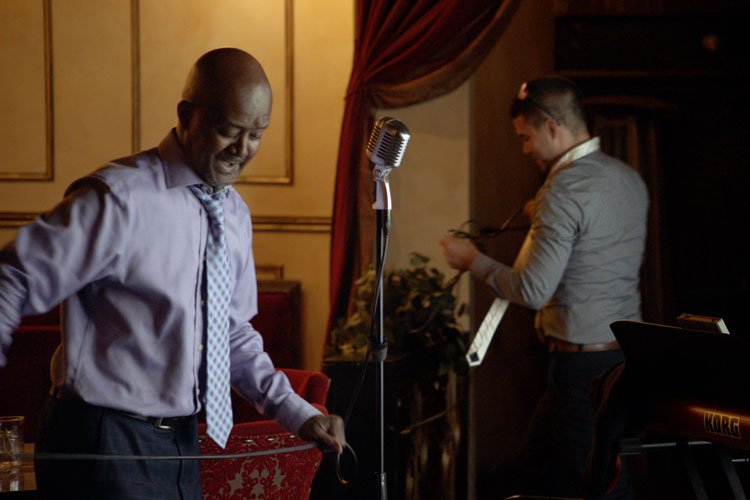 On a quiet summer Saturday night in 2015 in McKees Rocks, Pa., six random bullets struck a parked car, hitting Carlton Leeper, a professional singer, who was sitting inside with his son.

He took a bullet in the face. “That was my first real prayer,” recalled Carlton. “I was terrified. I was not ready to die.”

Fortunately, an off-duty police officer lived across the street; he took control of the situation, calling an ambulance. Carlton was rushed to Allegheny General Hospital's emergency department with a shattered jaw.

Once Carlton was stable, Dr. William Castillo performed reconstructive surgery on his mouth and jaw. Carlton recovered in the hospital for 13 days. He had to be fed through a tube and spoke only with a tracheostomy device.

“I came around Sunday evening, but I couldn’t speak or eat. I was just so relieved I was alive,” he said. “By Wednesday I was writing notes and cracking jokes. The doctors were amazed.”

The damage to his jaw and tongue could have meant the end of his singing career, which started in the choir in high school.

“I’ve sung with the Pittsburgh Civic Light Opera and in the lobby of the Omni William Penn Hotel. When I studied with Raymond Blackwell, a voice coach at Carnegie Mellon University, I really learned how to sing and enjoy it,” said Carlton.

After the surgery, speech therapy at AHN helped him regain the ability to speak and swallow. He continued with voice lessons from Blackwell for many more weeks.

Carlton was never concerned that he’d lose his talent. “I was definitely going to sing again, I didn’t worry about that much. The scary part was looking in the mirror a week after the accident. I didn’t recognize myself.”

Though Carlton’s diction while speaking isn’t perfect, he can hide the impediment when he sings. “It’s easier to sing than to speak in English, because of the long sustained passages,” he said.

He has had to give up some of the work that requires a high level of vocal skills, such as being a D.J. at clubs, and he’s learned that recording studios aren’t as forgiving as the human ear. “Microphones pick up every nuance,” he said.

The experience has changed Carlton’s perspective. “I am very grateful every day to be alive. I’ve learned something very valuable,” he said. ”It was a shame something like this had to happen to make me appreciate life so much more.

“God whispers to some people. Other people have to get shot in the face to get the message,” he added. “Now I ask Him, what do you want me to learn today?”

Still, eight months after the accident, Carlton is back on the stage every Thursday night at Cavo nightclub, his gift of song reborn.

A singer who won’t be silenced is living proof of the healing powers of music, and of medicine.

To learn more about Oral and Maxillofacial surgery, visit www.ahn.org/specialties/oral-maxillofacial-surgery
​