On Sunday, a local man brought a painting — which he had purchased for $5 — for an onstage appraisal. When the painting’s value was revealed, the audience was stunned. 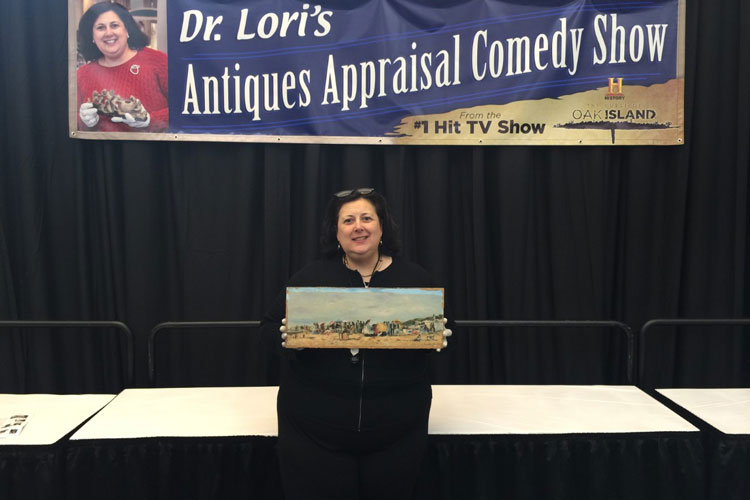 Last week, a local man visited the Duquesne Light Pittsburgh Home and Garden Show with a photograph of a small painting. He had purchased it years earlier at a quiet auction, paying $5.

“I saw it, and I thought it was fabulous,” said the owner, who chose not to be identified by name for reasons of security. “I didn’t know anything about it. I put it in a stupid frame and hung it in my room for about five or six years.”

After learning that Dr. Lori Verderame, Ph.D., an expert appraiser who has appeared regularly on television shows such as “The Curse of Oak Island” and “Auction Kings,” would be hosting her touring appraisal and comedy show at the 2017 Home and Garden Show, the decision was made. “I said, ‘Dr. Lori is coming; we’re going to take it to see Dr. Lori.’”

When Verderame — pictured above with the painting — saw a photograph of the work, she told the owner that she thought it was probably worth a lot. She’d need to see it in person, she explained, to be sure. He brought it to her noon show on Sunday, the final day of the Home Show, and examined it closely. 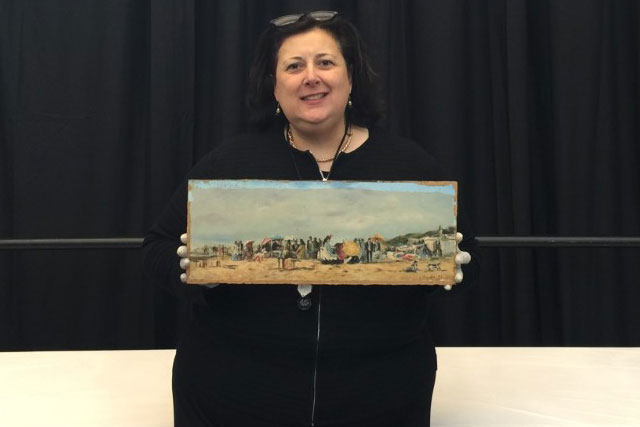 Verderame’s suspicions were confirmed: The painting was an original work by the influential French impressionist Eugène Boudin, a 19th-century landscaper and a close friend (and mentor of) Claude Monet.

Then she revealed the painting’s value.

The small painting purchased for $5 was worth approximately $150,000.

Gasps from the crowd accompanied joy from the owner, who said he’s been a collector of antiques for some time, but never had a find such as this.

The owner declined to reveal his plans for the painting, acting on the advice of Verderame. She recommends that anyone with potentially valuable items seek the advice of a professional appraiser (she offers appraisals both online and in person through her website) rather than contact an auction house.

“They’re not bad people, but they have a dog in the hunt. They’re looking for 40 or 50 percent of your [price],” she says. “They’re going to be happy to help you sell it — and why wouldn’t they be, that’s their job. But basically, they’re looking for this high percentage. You’re thinking, ‘I’m going to give up 50 percent or 40 percent when I know what it is? I want to bring home closer to 100 percent.’”

The discovery made for a dramatic conclusion to Verderame’s appearances at the Home and Garden Show — and sent plenty of audience members scurrying to try and uncover hidden treasures in their own homes.