Landforce and Ilyssa Manspeizer are restoring the people and environment of Pittsburgh. 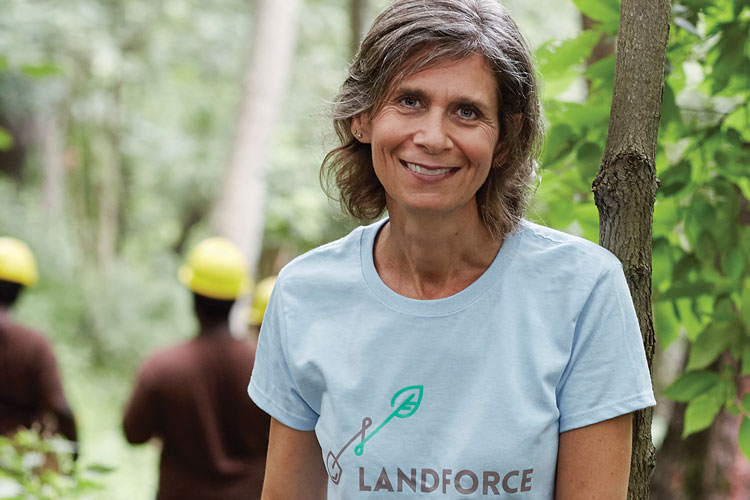 In 2005, the city of Pittsburgh created Emerald View Park, a 257-acre swath of hilly forest straddling Mount Washington, Duquesne Heights and Allentown. Despite its enviable proximity, much of the land had been largely unused, thanks to its location atop a former coal mine and history as a dumping ground.

​Ilyssa Manspeizer, who worked on environmental projects around the world before moving to Pittsburgh in 2006, was charged with developing it under the auspices of the Mount Washington Community Development Corporation. “A lot of people didn’t see the value in it,” Manspeizer says. “Getting people on the land was very important.”

After years of cleanup — about 350,000 pounds of garbage were removed — and planning work, the MWCDC and the city mapped 20 miles of trails through the park. A plan was great, Manspeizer knew, but how would she get those trails built? Volunteers could do some work, but Manspeizer wanted a professional crew. Around the same time, she visited the Allegheny County Jail with members of her class at Leadership Pittsburgh, and it clicked.

“We had a big pool of people and a big park that could both benefit from restoration,” she says. “Enabling people to build skills while building a park is a no-brainer.”

In 2011, Manspeizer oversaw the creation of the Emerald Trail Corps, which trained Pittsburghers facing barriers to employment — a lack of a diploma or work history, a prison record — in land stewardship. Within a few years, the crews built 10 miles of trails through the park. The group was so successful that it started getting calls to work on projects outside of Mount Washington.

Last year, the Emerald Trail Corps spun out of MWCDC to become Landforce, a separate nonprofit group; it now has two six-member crews and five full-time and one part-time staffers. It has partnered with the Allegheny Land Trust, the Western Pennsylvania Conservancy and other organizations to work on regional projects and continue its job-training program.

In mid-June, a Landforce crew worked in Emerald View Park, clearing brush and building drainage ditches amidst a sun-dappled green canopy. John Jones, a tall, lanky crew member who grew up in the East End, carried a Pulaski — a combo axe and adze tool — for a day of digging and cutting. Jones worked at a security job he didn’t like before enrolling in the horticulture program at the Manchester Bidwell Corporation, which provides adult education and training. That led to his hiring for a Landforce crew. He loves it. “You can call me a new outdoorsman,” he says. “I have found my niche.”

​Landforce hires new crew members each year, and Manspeizer hopes to increase the number of crews each year as well. By autumn, members will have acquired trail-building and land-stewardship experience as well as softer job skills, such as resume creation, that will make them employable in the private job market.

“We wanted to get out there and have a bit of an impact on the stewardship of Pittsburgh public land,” she says. “We’ve just trained 12 people who can.”