She Restores Dignity One Tattoo Removal at a Time 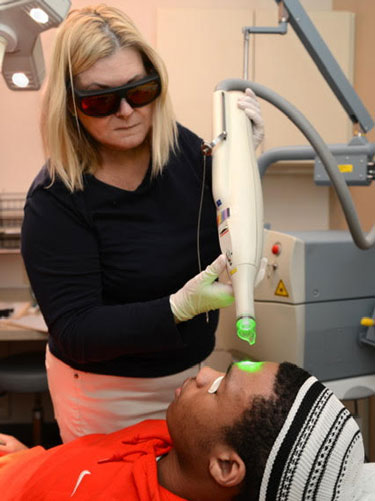 Inside her Braddock office, Bridget Miller calmly operates a laser while her patient, Paul,  squirms and moans throughout the process. Miller’s flashing beam of green light, which she says feels like getting splashed with hot bacon grease, attacks the pigment of a chest tattoo linking Paul to his former gang.

“This is my passion,” Miller says. “It’s what I’ve wanted to do forever.”

Miller, a native of Ligionier, opened the East Side Laser Center in 2008, where she offers services ranging from laser hair removal to facials. But tattoo removal is the heart of Miller’s mission.

“If I could only do tattoo removal for people that need tattoos removed, I’d do it all day long — happily,” Miller says. “It’s hard to tell other people that, they think I’m crazy.”

Soon after opening East Side Laser, Miller received a request  from Kim Kaufman to remove a tattoo for free from a 15-year girl living at center for troubled youths in Emlenton, Butler County. Åccording to Kaufman, the girl was attacked because her tattoo linked her to a rival gang.

Miller accepted, and began The Erase Project — a nonprofit tattoo-removal service for current and former inmates, former gang members, or anyone wanting to turn their life around.

Tattoos, says Miller, can be a catalyst. Former gang members who’ve cut all ties with their old lives can still be subject to violence by the ink on their body.

Not only does she erase tattoos for free, Miller has never received a grant for her work, sustaining the nonprofit solely from the other services offered at East Side Laser. The service can be expensive.  Miller says typical tattoo-removal cost is about $135 per square inch of skin.

Miller says 95 percent of inmates have tattoos — most of them on visible body parts, which makes it harder for them to land a job when they are released. She only works on faces, necks and hands but doesn’t limit who she will treat, with one exception. They can’t be wearing shackles.

“One day [Mid Atlantic Youth Services] brought in kids with foot and arm shackles,” Miller said. “I said, ‘you take those off these kids right now’… they’ve gotta have some dignity. It’s all about giving these people another chance.”