Sim and Tanveer Bhullar, who attend The Kiski School, are shooting to be basketball's first mega-stars of Indian descent.

When 17-year-old Sim Bhullar dunks a basketball, he doesn’t pull a face or furrow his brow as he prepares for takeoff. He nonchalantly extends his 7-foot-4-inch body and 747 wingspan and reaches for the rim the way most mortals reach for a box of Oreos on the top shelf of the pantry.

"Dunking is easy for me, so I don’t really even think about it," Sim admits. "It feels like doing a layup." Opposing coaches wish this were their worst nightmare. Unfortunately for them, Sim is joined under the basket by his 7-foot-2-inch younger brother, Tanveer.

Sim and Tanveer, 15, attend The Kiski School, the pastoral, 350-acre boarding school 30 miles east of Pittsburgh in sleepy Saltsburg, Pa. Kiski is known as an incubator for Ivy League eggheads, but thanks to the behemoth Bhullar brothers, the school’s previously unheralded basketball team heads into the upcoming season ranked 25th in the nation, according to CBSsports.com.

Big-time college recruiters are already tripping over one another to secure the Bhullars’ letters of intent—University of Pittsburgh coach Jamie Dixon is a regular at their games— making the brothers the first-ever NBA hopefuls of Indian descent. But life wasn’t always a layup.

Sim and Tanveer grew up in Toronto, born to parents who emigrated from Punjab, India, in the late ’80s. Sim first picked up a basketball in seventh grade and started dunking about a year later. Tanveer soon followed suit, but the brothers’ talents were raw. Sim spent his first year of high school in Toronto practicing seven days a week— his coordination always a half-step behind a body that just kept growing.

But all of that changed when Daryn Freedman came along. The former Duquesne University assistant, 34, had just taken over the head-coaching job at Kiski when he stumbled upon the brothers in summer 2009. Freedman saw more than a sideshow or a "project;" he saw two unusually graceful extra-big men. Within a few weeks, he convinced Varinder Bhullar to send her boys more than 300 miles away to The Kiski School, where the dorm rooms would be equipped with 8-foot, extra-large bunks. 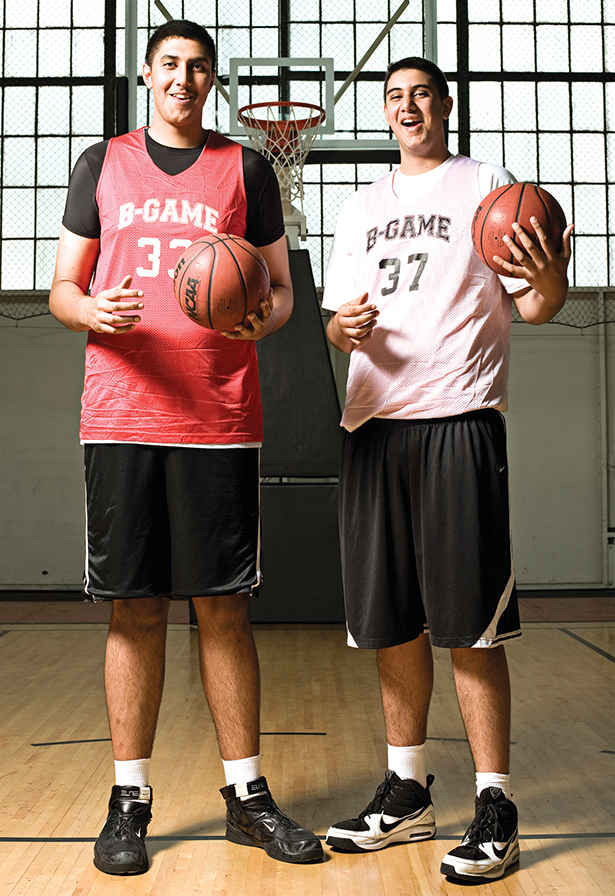 "Sim arrived at Kiski a very shy kid," Freedman says. "Conditioning was also an issue. I had the team running sprints during the first practice, and Sim did one and he was exhausted." (Hey, you try doing laps in size 22 Nikes.) Still, Freedman knew that Sim could become one of the best players in the nation if only he believed in himself.

"Everything was brand new to him," Freedman says. "The first game we played last year was in Connecticut in front of 150 Division-1 coaches." Sim struggled mightily. He fumbled passes and stopped calling for the ball, admitting to Freedman after the game that he had been extremely nervous.

"At first, I was a little bit homesick at Kiski, but having my brother there made it less lonely," Sim says, "and eventually I started making my own friends." With Tanveer’s help, Sim started coming out of his shell and calling for the ball, posterizing pimply faced prep-school power forwards with flashes of Hakeem "the Dream" Olajuwon’s breezy low-post moves.

This summer, as the hype surrounding the Bhullars spread on YouTube and sports blogs, Sim’s home country of Canada came calling for his services at the FIBA Under-18 tournament, the premier international basketball showcase in San Antonio. Sports Illustrated described Sim’s performance as a "showstopper."

But perhaps more importantly, the brothers have hit their stride off the court. On weekends, best friend and teammate Jason Sebak often takes them to his parents’ house in New Kensington to hang out and to explore Pittsburgh. Last December, Sim wanted to do something fun for his birthday, so Sebak took him to a Steelers game. In the Strip District, home of anything and everything, Sim even found a 5-XL Santonio Holmes jersey; Sebak bought it for his buddy as a birthday gift.

"The shopkeeper said it was the first quintuple-sized jersey he ever actually sold," says Sebak, whom the Bhullars both call their "brother."

As kickoff approached and the wave of towels crested, one twirled high above the surf. There was the 7-foot-plus Canadian-Indian—now an adopted Pittsburgher— waving his Terrible Towel close to the heavens. The late Myron Cope, if he were around to see it, surely would have blessed the unusual scene with a "Double Yoi."

This article appears in the September 2010 issue of Pittsburgh Magazine.
Categories: From the Magazine