Rhubarb’s old-fashioned appeal is new again, so bring some home while the local season lasts.

If you want to make someone pucker up, give him or her a taste of rhubarb before you’ve cooked it with sugar. The stalk of Rheum rhabarbarum has such extreme sourness that it’s only truly edible when it’s sweetened. And don’t offer up the leaves: Unlike celery leaves, which are delicately flavorful, rhubarb leaves are toxic.

If rhubarb isn’t the most approachable fruit, well, perhaps that’s because this large ruffly leafed plant is actually a vegetable. Putting rhubarb with sugar into pies was first popularized in Britain in the late 1700s—not surprising given the English’s notorious sweet tooth. Gardeners in the cool climate quickly embraced it, pleased to discover a brightly colored, garden-fresh ingredient that could be harvested before other spring produce.

Rhubarb’s popularity increased during the 1800s as growers bred new varieties with more sweet and tender stalks; combined with cheaper sugar, this led to a “rhubarb boom” between the world wars. By 1820, people in New England were growing the hardy crop, calling it “pie plant”; eventually, settlers carried it all the way out West, and today the Pacific Northwest remains a major producer. Nearby Michigan is the country’s third-largest grower, so it makes sense that our region is also a great place to cultivate the crop.

Local farmer Don Kretschmann, of Rochester, Pa., who includes rhubarb in his CSA baskets, says it’s making a comeback. “People seem a lot more adventurous with ingredients right now, and they’re revisiting rhubarb to use in more than pies and crisps,” he says. Case in point are creative cocktails you’ll see around town that range from rhubarb cosmopolitans or mojitos to drinks sweetened with rhubarb-strawberry syrup.

Chefs are finding fresh uses for rhubarb in savory dishes, too, pairing its assertive flavor with robust meats, such as duck or pork, and using it in chutneys or sauces with fresh ginger or dried cherries. When it comes to sweets, citrus is a common partner for rhubarb, particularly in jams and preserves; for those who grew up eating it, however, nothing can compete with a delicious strawberry-rhubarb pie.

If all this whets your appetite for rhubarb, remember that it’s easy to grow and, once established, will produce plants from the same roots for up to 15 years. “Keep a sharp eye out, and you just might find more rhubarb than you can ever eat in your own backyard,” Kretschmann advises. If a little investigating doesn’t turn up an unexpected bounty, check out the next page to learn where to buy locally grown rhubarb this month.

In Italy, rhubarb is used to make rabarbaro, a distinctive, bittersweet aperitif that has a reputation as a stomach-settling drink. 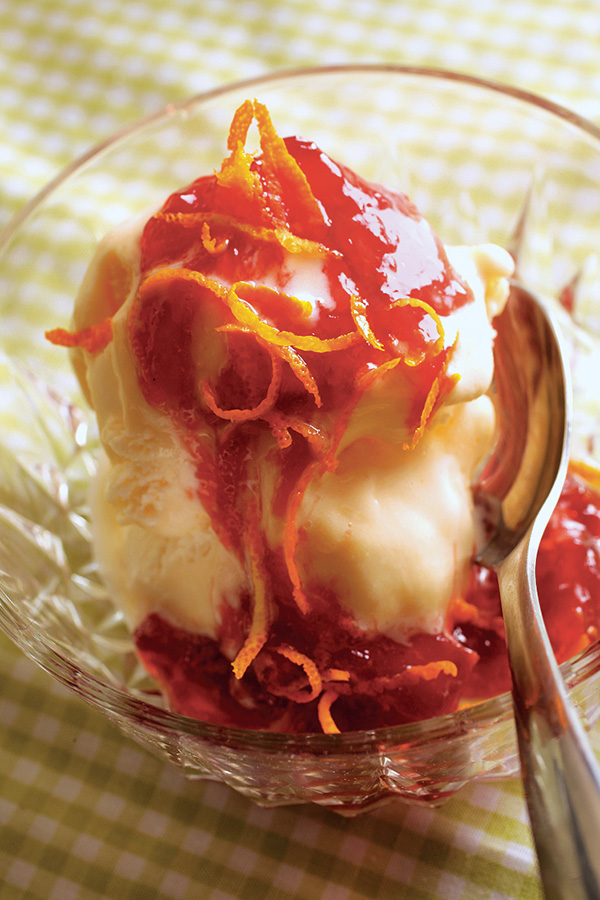 Crystallized ginger, available in the bulk-food section at stores such as Whole Foods, and fresh orange zest give this jam delicious flavor—plus, you can make it with either fresh or frozen rhubarb. Try it on toast or even as a topping for vanilla yogurt or ice cream.

In a heavy, medium saucepan, combine the rhubarb with 1/2 cup granulated sugar, 1 tablespoon chopped crystallized ginger (use more if you like gingery heat) and 1/2 teaspoon finely grated orange peel.

Stir over medium-high heat until sugar dissolves, then bring to boil. Reduce heat and simmer, stirring often to prevent burning, for about 20 minutes or until jam is thick enough to mound on a spoon (with fresh rhubarb, the cooking time may be slightly longer). Transfer to bowl. Cover; chill. Keeps well-chilled for up to one week.

High in nutrition and low in calories, rhubarb is packed with vitamin C, fiber and potassium. It has often been touted as a health food that speeds up metabolism and assists with weight loss.

Taking Root
When it comes to enjoying rhubarb, we focus on the crisp red stalks, but in ancient times, they were discarded in favor of the roots. Native to Asia, the plant was first prized exclusively for medicinal uses.

Records detailing its use to cure ailments in China date as far back as 2700 B.C.; its reputation for healing was such that the dried root became one of China’s most valuable exports by the first century, prized from Baghdad to classical Greece and Rome.

The concept of eating the stalks didn’t seem to gain any traction until around the 16th century in England. Although rhubarb was initially viewed as a medicinal item there as well, its similarity to sorrel, a small but related plant, seems to have inspired a few hardy eaters to give the stalks a taste. Soon afterward, dishes featuring the plant turned up in recipe books, and a rhubarb patch became an ubiquitous feature in English home gardens.

SPRING STALKS
In western Pennsylvania, peak harvest time for most fruits and vegetables is still a long way off—but rhubarb is the exception. The rhubarb crop comes in this month through early June. The end of the season overlaps with the arrival of the first local strawberries, providing natural inspiration to combine the two in easy sweet-tart desserts. 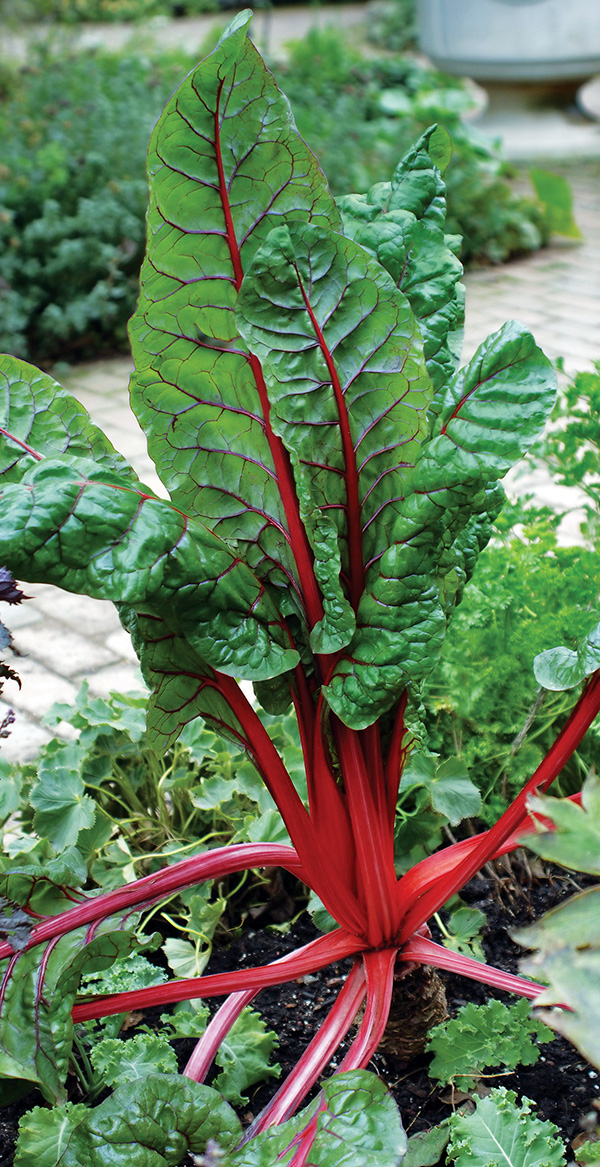 SHOP LOCAL
Find local field-grown rhubarb at the market at Schramm Farms and Orchards (1002 Blank Rd., near Jeannette, Westmoreland County; 724/744-7320)—you even can receive recipe cards there with ideas for how to use it. Farmers’ markets, many of which kick off this month, are also a good place to find rhubarb; if you have a CSA subscription, it may well show up in your delivery basket shortly.

Larger grocery stores are less likely to stock locally grown rhubarb, instead importing field-grown rhubarb from elsewhere between May and July. Hothouse rhubarb, the alternative that is sold at less-seasonal times of year, has a bit less crispness and flavor than field-grown but works perfectly well in recipes.

PREP AND COOK
Look for deeply colored rhubarb that’s firm with bright, glossy skin, and avoid very thin or very thick stalks—medium-size stalks that resemble a regular stalk of celery are best. Crisp, fresh rhubarb shouldn’t have to be peeled (peeling also removes some of the stalk’s beautiful red color). Watch out for late-harvest rhubarb that has been left in the ground too long, which makes it tough and stringy.

Before cooking, remove and safely discard all traces of the toxic leaves from each stalk. After rinsing, trim both ends of the stalk and discard any brown or discolored parts before cutting into pieces for cooking. Cook rhubarb in a nonreactive pot: one made of a material such as enamel, glass or stainless steel that doesn’t react with acidic foods.

There are lots of fun recipes for experimenting, but even the simplest preparation is rewarding: Just cut the rhubarb into pieces, heat it with a little water, add sugar to taste (it’s usually quite a bit) and pour the sauce over vanilla ice cream.

This article appears in the May 2010 issue of Pittsburgh Magazine.
Categories: Eat + Drink Features