See the Colorful Mosaic Lounge That Brought Pittsburgh to the Hamptons

Get inspired by the hip lounge with Mid-Century Modern vibes that Betsy Wentz, owner of Studio B Interior Design in Sewickley, created for the exclusive Hampton Designer Showhouse using Pittsburgh artisans. 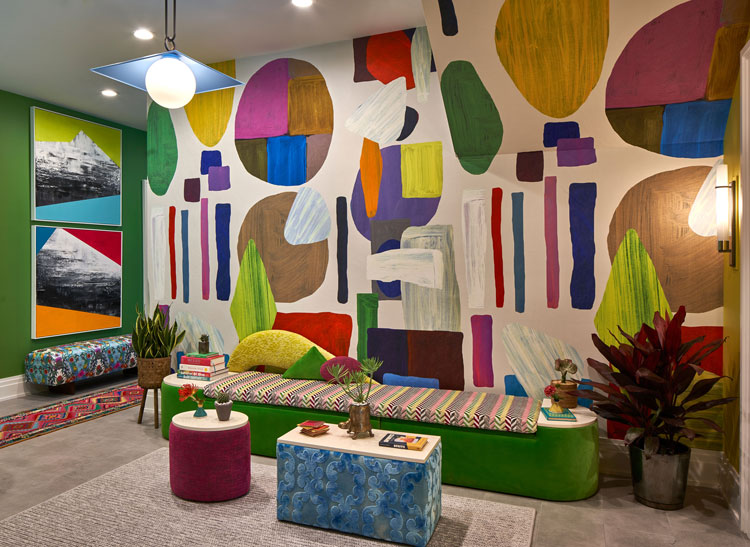 When interior designer Betsy Wentz, owner of Studio B Interior Design in Sewickley, participated in New York’s exclusive Hampton Designer Showhouse over the summer, she brought Pittsburgh with her.

“We have such talent here in Pittsburgh and I wanted to showcase that in my room,” says Wentz, who adds she was able to use work exclusively by Pittsburgh artisans to decorate her room.

Wentz found out in April that she had been selected from the hundreds of designers who applied to be part of the showhouse. Having never been to the Hamptons, she packed her bags and went to see the house so that she could list her top three rooms she wanted to decorate. In May, she found out she got her first choice: the bar and lounge.

After that, things kicked into high gear.

“You really only had like 10 weeks to pull the whole thing off. So it’s really, really, really tight and most custom furniture takes 10 to 14 weeks, and a lot of times things are backordered, so it really was a huge challenge,” says Wentz. 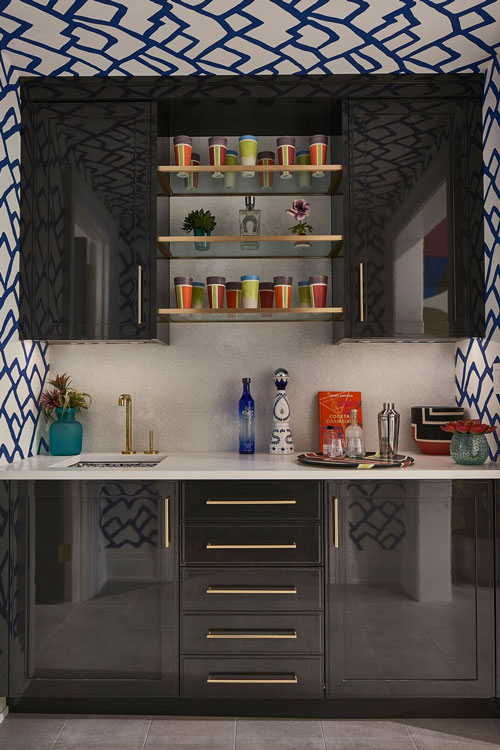 When Wentz first saw the bar and lounge, it was still under construction. However, the way it wrapped around the corner and featured a nook inspired her mid-century modern design, which featured bold, colorful mosaics.

Jason Leviere from Pittsburgh-based Santom Upholstery custom made all the soft seating for the lounge, including Wentz’s favorite piece, a green velvet sofa with a candy-striped seat cover.

“Jason…was a solution to my problem because I couldn’t get custom furniture in that short a period of time, so he basically made it all for me like over a week period. And they made it all in their shop,” she says.

A digital wallcovering, featuring geometric shapes, was Wentz’s other source of inspiration. The personalized wallpaper, which she says people often mistook for painting, was printed specially for her.

“We did a custom ombre which went from like a really deep green — like a lime — to a lemon,” says Wentz. “So it was kind of a color story that evolved and then we got the paintings from Mia, and the mid-century pottery and ceramics from Jowdy, and it just sort of all came together.”

The look for Wentz’s design came from the room itself, but also her personal, modern style as a 1970s kid. When she saw all the wallspace, she knew she wanted to cover it in fun wallpaper.

“It just felt very cool, and because it was a bar lounge — and I love tequila — I decided to sorta turn it into this, you know, mid-century-vibed lounge,” she says.

Even though the process was challenging, and took Wentz, a mother of four, away from her family, it was a once-in-a-lifetime experience, she says. It also benefits a worthy cause. Last year, the event raised $150,000 for Stony Brook Southampton Hospital in New York.

“I loved every second of it,” Wentz says.