For the first time, Pittsburghers can see for themselves the uniform and bat that made World Series history.

It was a moment in Pittsburgh sports history like none other.

Bill Mazeroski’s blast over the left field wall of Forbes Field on Oct. 13, 1960, defeated the New York Yankees and remains the first and only walk-off Game 7 home run in World Series history.

Now Pirates’ fans can see for themselves Mazeroski’s uniform and bat from that historic day. 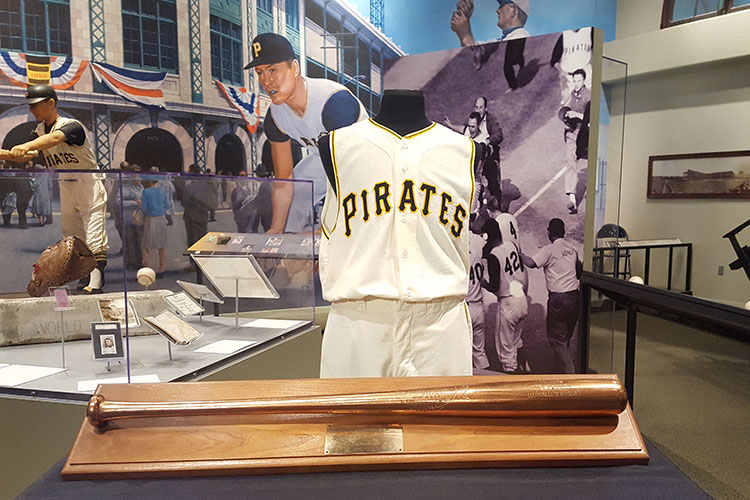 Alba and Thomas Tull, founder of the Tull Investment Group and part of the Steelers’ ownership group, purchased the memorabilia at auction in 2013 and now are donating it to the Western Pennsylvania Sports Museum, which is located inside the Sen. John Heinz History Center.

History center president and CEO Andy Masich jokes that the uniform “still has Mazeroski’s sweat from 1960 on it.”

The 35-inch, bronzed Louisville Slugger bat and uniform are on display in the History Center’s fourth floor Special Collections Gallery. They join other 1960 World Series souvenirs, such as the pitching rubber on which Yankees pitcher Ralph Terry stood.

“We are thrilled that Pirates fans can relive Maz’s epic 1960 World Series home run every day at the Western Pennsylvania Sports Museum,” say the Tulls in a statement. “With the excitement surrounding Pirates baseball in recent years, we felt the time was right to donate these objects to the History Center and educate a new generation of Pirates fans about this incredible moment in sports history.”

Craig Britcher, assistant curator and project coordinator at the museum, pointed out that Maz’s last name was spelled incorrectly on the bat’s plaque (with an “s” instead of a “z”). The bat and plaque used to be displayed in Mazeroski’s home, but he said Maz never asked for a new plaque to be made. 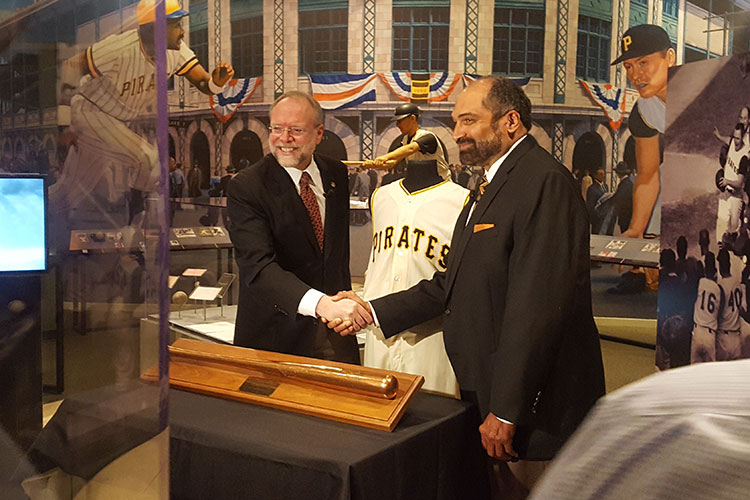 Former Pittsburgh Steeler Franco Harris, co-chair of the Sports Museum Champions Committee, helped to unveil the items Wednesday at the museum. The turf on which Harris made his legendary “Immaculate Reception” to beat the Oakland Raiders in the 1972 AFC Divisional Playoff Game also is on display at the Museum, along with the cleats he wore that day.

“This is for the people of Pittsburgh to enjoy and relive this moment,” Harris says.

Following the artifacts’ unveiling event, Masich announced a campaign to raise $3 million for an expansion of the Western Pennsylvania Sports Museum. The expansion will bring additional hockey, football, baseball and Olympic sports exhibitions, along with interactive experiences where children can learn about the region’s recent innovations in sports science and medicine.