"A Musical Christmas Carol," "The Nutcracker" and "Highmark Holiday Pops" all perform in the Cultural District. 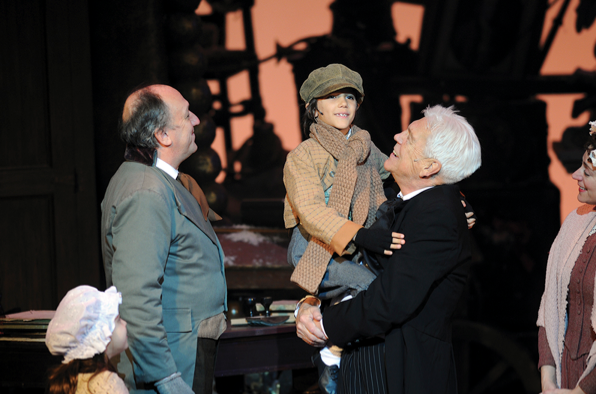 A TRIO OF HOLIDAY PERFORMANCES DOMINATE DOWNTOWN
With all due respect to the many fine holiday activities that take place throughout the community, the closer you get to the Golden Triangle, the more pervasive the seasonal spirit can be. Perhaps it’s just a numbers game: There are plenty of places for art, decoration and performance downtown, and all fill up with red-and-green celebrations this time of year. This weekend, the Cultural District is particularly packed with yuletide entertainment.

At the Byham Theater, Tom Atkins reprises his role as Ebenezer Scrooge in CLO’s annual tradition, “A Musical Christmas Carol.” The busy cast will perform five times this weekend. The Pittsburgh Ballet Theatre returns to the Benedum Center for “The Nutcracker,” the enduring favorite that’s introduced generations to ballet; the show runs Thursdays through Sundays until Dec. 28. And the Pittsburgh Symphony Orchestra’s “Highmark Holiday Pops” performances are packed with familiar tunes, special guests and, indeed, Santa himself.

INTRODUCING THE AFTER DARK HALL OF FAME
We’ve been covering local nightlife for a while around here. At least long enough to have made reference to bars that, upon fact-checking, are determined to no longer exist. So we feel that we’re finally qualified to open up The After Dark Hall of Fame. We’ll periodically induct locations, institutions, concepts, bars, restaurants, areas, beverages . . . whatever we can think of, really, to acknowledge their contribution to Pittsburgh’s nighttime vibrancy. You’ll have to read the blog to discover the first honoree. Let’s just say it’s the place for smiles. Check out the inaugural inductee in this week’s edition of After Dark!

BOTH PITT BASKETBALL TEAMS ARE IN ACTION AT THE PETE
We’ve finally come to accept that the Steel City will not become home to an NBA team in the foreseeable future, no matter how many fish save Pittsburgh. We’re not too broken up about this: We keep hearing that the college game is better anyway. And it’s certainly a pleasure at the Petersen Events Center, the intimate home of Pittsburgh Panthers basketball. If you’ve never seen a game at the Pete or haven’t made the trip in a while, this weekend is a great time to get acquainted. On Saturday, the men's team will host St. Bonaventure at 2 p.m.; the team is fresh off a victory over Duquesne in the annual City Game at Consol Energy Center. Sunday, the women’s team will face Drexel, also at 2 p.m.; first-year forward Yacine Diop was just named ACC Freshman of the Week.
(3719 Terrace St., Oakland; ticket info here)

IN THEATERS: A divergent trio of new releases hits theaters this weekend: Hillary Swank and Tommy Lee Jones in “The Homesman,” a dark Western; “Top Five,” a comedy written by, directed by and starring Chris Rock; and “Exodus: Gods and Kings,” a Biblical epic starring Christian Bale as Moses.

The Trans-Siberian Orchestra returns to Consol Energy Center Saturday for two performances of "The Christmas Attic." Tickets and info here.

Artist Andrea Polli, creator of the light installation “Particle Falls,” which is currently illuminating Penn Avenue, will speak about her work at 4 p.m. Saturday. More info and registration at Public Art Pittsburgh.