'Second Suburb' and 'No Water'

Two recent releases question the legacy of the suburbs to American society.

Ah, the suburbs. That mythical world existing far outside the tension and pollution of city living. It’s an American dreamscape filled with bright-green manicured lawns, youth soccer leagues and chain restaurants as far as the eye can see. It’s a cliché, really. Just say the word aloud, and it will conjure placid visions of pool parties and conformity.

But what does any of that have to do with the suburbs as an actual place where real people live and raise families? Who invented the suburbs? And what is the legacy of suburbs? 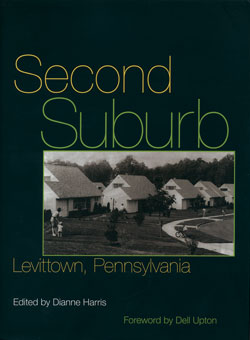 Second Suburb: Levittown, Pennsylvania is an investigation into those very questions. Editor Dianne Harris focuses our attention on the planned community of Levittown in Bucks County. This was the second of the famous communities designed and built by Levitt & Sons. Construction began in 1952, soon after the completion of the first Levittown, which was located in Long Island, N.Y., and was finished in 1958, with more than 17,000 houses built.

The Levitts adopted an assembly-line approach to construction. As Harris notes in her introduction, “The Levitts designed and built a range of house types with a varied price structure intended to appeal to a somewhat diverse spectrum of working- and middle-class buyers.”

The post-war boom was on, so the Levitts’ affordable housing in clean, safe neighborhoods that offered schools and shopping centers appeared to be the fulfillment of a certain kind of American dream.

However, as Harris continues, “They grouped each house type in a specific neighborhood and therefore sorted residents of the development by income… . As a result, Levittown residents were especially aware of incremental differences in income, class and status.”

Not only that, but William Levitt decreed that none of the homes were to be sold to anyone of African-American heritage.

Rather than attempt a linear history of the Bucks County community, Second Suburb: Levittown, Pennsylvania takes a more circuitous route, collecting a range of essays from a great variety of sources. Most affecting are several personal essays from Levittown residents.

For example, Josephine O’Neil, a former Homestead resident, recalls the unexpected prejudice her family encountered because her husband was a steelworker. You can still hear the pain in her voice all these years later: “[T]hey just thought we were scum, and we weren’t scum.”

Most notable is the selection from the memoir of Daisy Myers recounting her experiences as part of the first black family to move into the community. Protests and a small riot ensued, eventually resulting in an armed guard of policemen stationed around the perimeter of the Myerses’ house for the family’s protection.

Not everyone’s Levittown experience was quite so dire. Other residents, like Bill Griffith, provide a more halcyon picture of life in the suburb; Griffith provides a series of his Zippy comic strips, which play on a certain winking nostalgia for 1950s suburban life.

A photo essay offers the reader a real feeling for the community, from the pouring of the first concrete slabs to the opening of the appropriately named Walt Disney Elementary School.

Dianne Harris herself investigates the relationship between housing and personal identity. As she notes, the local newspaper featured a regular column that would spotlight the home of a resident. Knowingly or not, the column underscored just how much we stake our own identities on the place in which we live:

“[T]he columns listed the owners’ names, provided information about their backgrounds, occupations and hobbies, and then, detailed the arrangement and type of furniture, draperies, fabrics, artwork, plants, carpets and various displayed possessions.” 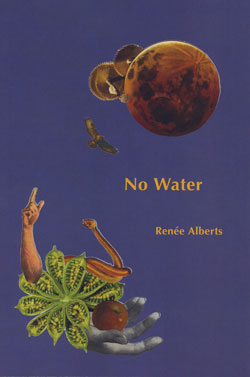 Identity also goes under the microscope in poet Renée Alberts’ first collection, No Water. In her work, the physical environment reflects, and sometimes enacts, the nature of the individual. Whether in the adolescent assertion of the self displayed in “Pony Bottles:” “10th Street Bridge arcs its yellow spine / over ale-brown Monongahela, its shade / complicit to our delinquency.” Or in the topographical Catholicism of “Holy Wednesday:” “Pigeons dive and swerve wild arcs / in the narrows, as though six blocks west, / there weren’t three rivers fused at the knees / of a genuflecting valley.”

Alberts is a poet of wonderful sensuality. Her language is as juicy as a ripe tropical fruit. Even something as matter of fact as holding a pint of beer is transformed by Alberts’ verse into hot breath on your ear: “My hand fogs its aura into beer glass frost.”

The twin themes of identity and family coil through No Water like a personal caduceus in this outstanding debut.

Visit animalprayer.com to purchase No Water.

This article appears in the November 2010 issue of Pittsburgh Magazine.
Categories: Things To Do