Sean Luther is Using Pittsburgh as a Creative ‘Urban Laboratory’

Envision Downtown is experimenting with the fabric of the urban core. 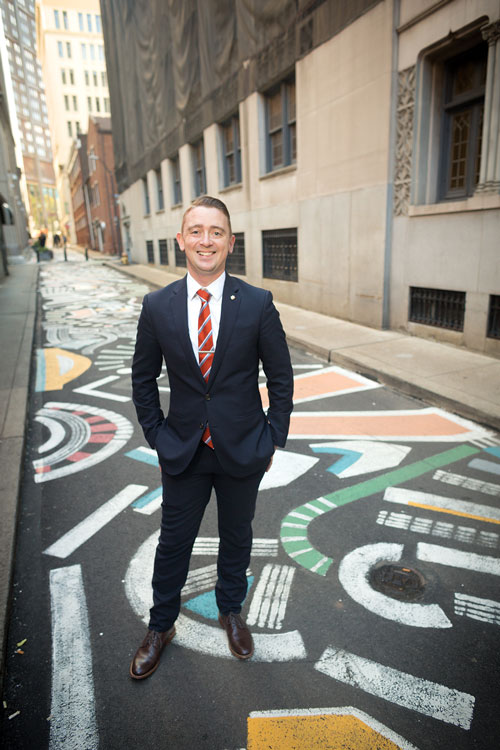 Last winter, after a few weeks of construction, Downtown received a surprising new addition: A bus shelter on a once-jammed stretch of Smithfield Street. A few months later, Strawberry Way evolved from a popular but bland walkway to one filled with tables and chairs and painted in a festive, confetti-style pattern. A “park in a dumpster” appeared over the summer in a Downtown parking space. In October, bold designs of local bridges replaced the boring crosswalk stripes and bike lanes at Penn Avenue and Eleventh Street.

What is interesting about the work — intended to make Pittsburgh’s urban core both more inviting and more pedestrian-friendly — is that there were zero public meetings about the projects. There were no pitched fights over parking spaces or bike lanes or what type of chairs to buy. The projects just sort of … appeared.

“We are nimble and fast and able to move in a way that a lot of other organizations can’t,” says Sean Luther, executive director of Envision Downtown, the group behind the projects. “We’re using Downtown as an urban laboratory.”

Envision Downtown was created in early 2015 as a public-private partnership between the Pittsburgh mayor’s office and the Pittsburgh Downtown Partnership; it is funded by foundation grants. Luther, who previously worked as a senior director of the Green Building Alliance and as CEO of Downtown Roanoke, was hired and tasked with quickly installing temporary projects that would make life better for Downtown residents and workers.

Take the Smithfield Street bus shelter, for example. The stop at the corner of Smithfield and Sixth is the busiest in the city, handling 6,500 passengers a day; at rush hour, crowds used to be so thick on the narrow band of sidewalk that walking there was nearly impossible. Envision Downtown looked at the street and realized that by slightly narrowing the three lanes previously used for traffic and parking, it could bump out the sidewalk an extra 6 feet. That was enough space not just to create more standing room but also to add “lean bars” for sitting and a shelter from rain and sun. Even the shelter was a sign of innovation — instead of going through a laborious request-for-proposals design process, Envision Downtown bought and repurposed off-the-shelf bike shelters.

“We’re flipping the usual urban-planning paradigm on its head,” Luther says. “Usually there’s a big public plan with a lot of community input. The problem is that, by-and-large, then what happens is nothing — people are so burned out [by the process].”

Envision Downtown instead is empowered to tap into the PDP’s network (stakeholders such as property and business owners), as well as that of the city (say, the department of public works) to move fast on its temporary projects. The temporary part is important — these projects are experiments. If they don’t work — if people don’t use the Strawberry Way seating — they will be removed or adjusted. Smithfield Street can be relatively easily returned to its former standing, while paint on the Penn Avenue crosswalks and on Strawberry Way is meant to last only for about a year.

Even Envision Downtown is temporary. The project’s funding runs through 2017; at that point, it may receive a short extension, fold its fast-moving DNA into a city department or the PDP or disappear entirely. The point is to simply try things — and lay groundwork for a faster-moving future.

This article appears in the December 2016 issue of Pittsburgh Magazine.
Categories: Community Feature