School’s Out Forever at Bethel Park

As Bethel Park High School is set to be demolished, one alum is getting a bit misty-eyed. 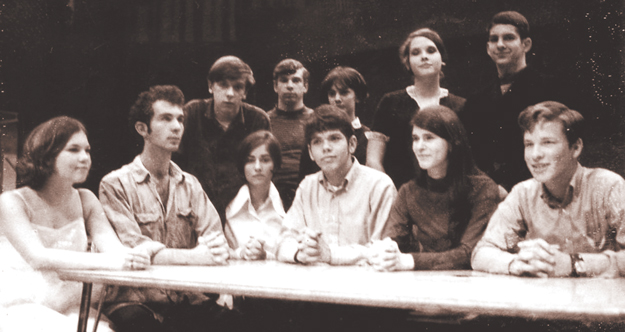 Rick (front row, center) with the cast of the 1970 Junior-Senior class play You Can’t Take It With You at Bethel Park High School.

They’re going to tear down my old high school. Not this month, but if all goes as planned, they’ll start razing in 2012. A new big monolithic building is almost ready just across the street from the old gym, and students move in around the end of January. Then the old Bethel Park High School gets demolished.

This BPHS opened to students in 1959 and was officially dedicated on Oct. 23, 1960. (The Civic Arena opened within a year. People around Pittsburgh were obviously building unusual structures with imagination and vision.)

You see, the beauty of the old Bethel Park Senior High was that it was made up of eight buildings. It was a campus. I started there in ninth grade in 1967. Everybody walked around the grounds between classes. You knew when you had to truck briskly from Building 3 to the cafeteria and when you could just relax and hang out.

In the winter, we carried coats, worried about hair freezing after swimming class and when things got icy, we watched from Building 1 as teachers and other kids tried to get down the steepest walkway without slipping. But we loved how unusual and fun the campus made our high school experience. 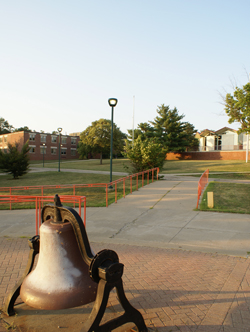 “Students always loved the campus,” Pittsburgh architect Al Filoni told me.  “It was adults who sometimes didn’t like it.” His firm, McLachan, Cornelius and Filoni, renovated the BPHS campus in the mid-1990s, and I wondered what an architect thought of the place. He said the simple, boxy flat-roofed buildings would probably be considered part of the International School and that the campus concept probably grew out of innovative thinking going on at Harvard in the ’50s in the Graduate School of Education and in the School of Design. Would Filoni be sad to see the school torn down?

“In a way, yes,” he said, “because it represented a particular place and time that are disappearing.” He said he was also very proud of a “wonderful rehearsal room” he designed for the music department—soon to be leveled for practice fields.

I went and walked around the empty campus one recent evening, and the structures seemed mundane, not worth crying over. What I recalled were vivid moments in these places: talking in a Building 1 biology lab on the day RFK was assassinated, laughing with Mademoiselle Young in French class in Building 4, standing at my locker in Building 2 as I realized the top of my ear was frostbitten, working on the class plays, discussing Look Homeward, Angel in Mr. McCulley’s class, going to the office when a vice principal informed me that a “foreign” cigarette had been found in the boys’ room and that my Brazilian exchange brother was suspected. I remember spending countless hours in Building 4 with classmates and Mr. Mochnick, culminating in an after-school suburban Pittsburgh production of Dylan Thomas’s Under Milk Wood in our experimental Theatre 400.

So, it’s people and incidents and predicaments that I remember. The buildings themselves don’t seem to matter. But losing important places where we grew up can be disheartening, and I know I’ll always think I learned more here because we walked between classes. We left here ready for college.

This article appears in the September 2011 issue of Pittsburgh Magazine.
Categories: Rick Sebak