There’s a lot happening in the area between the South Side and the Hilltop, and every time you visit, it seems a new business has cropped up. The communities around Mount Washington enjoy beautiful views of the city as well as parks, strong neighborhood associations and ethnic restaurants. 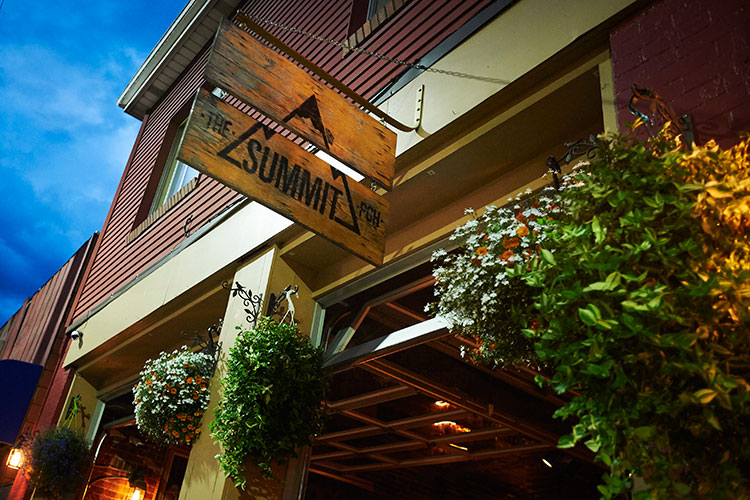 South Side Flats
The South Side Flats contain the bustling business district along East Carson Street, with its many bars, restaurants, thrift shops and retailers.

Mount Washington
More than inclines and beautiful views of the famous Pittsburgh skyline, Mount Washington is home to some of the most unique homes in the city as well as popular upscale restaurants.

Duquesne Heights
This hilltop residential community is accessible by the Duquesne Incline and is another option for homeowners looking to get city views without the Mount Washington price tag.

Allentown
This neighborhood is in the midst of a major revitalization, as developers have taken notice of its prime hilltop real estate. The community still is recovering after losing regular light-rail “T” service years ago, but Allentown is getting a hip reputation as businesses and restaurants set up shop.

Arlington
The steep hills and houses built in the early 1900s in the residential neighborhood of Arlington are quintessential Pittsburgh. The neighborhood is a popular choice for those looking for proximity to the South Side with a bit more peace and quiet.

Arlington Heights
This small neighborhood — less than one-sixth of a square mile — is nearly engulfed by Arlington and features the Devlin Park baseball field.

St. Clair
St. Clair is a tiny residential area that is home to the Lighthouse (810 Fisher St., lighthousepa.com), a non-denominational church.

Mount Oliver Borough
Established in 1892, the borough of Mount Oliver is surrounded by the city of Pittsburgh. Founded on lands acquired by Captain John Ormsby, it now has a population of about 3,300.

Mount Oliver
This city neighborhood is distinct from the adjacent Mount Oliver Borough, but it’s tiny — only about one-tenth of a square mile.

Knoxville
The neighborhood of Knoxville used to benefit from nearby incline and electric railway access that made the area desirable for steel workers. The area houses more about 3,700 residents and a few churches in one-third of a square mile.

Beltzhoover
The residential neighborhood of Beltzhoover shares its riches with its neighbors — the up-and-coming business district of Warrington Avenue with Allentown and the spacious McKinley Park with Bon Air.

Bon Air
The city neighborhood has more of a country feel, with few roadways and extensive greenery. It’s fairly remote from the area’s main thoroughfares, making it a haven in the middle of busy city neighborhoods.

Carrick
Some of the streets in Carrick are so steep that they give you the feeling of being on top of the double-dipping hill of the Jack Rabbit roller coaster at Kennywood. The area benefits from bus service and being close to “T” light-rail access, making it a popular place for anyone looking for a home base from which they can get around Pittsburgh without a car.

The Pub Chip Shop in the South Side Flats has expanded its offerings to include more than the fish and chips, Scotch eggs and savory pies that it’s done so well since opening in 2013. The English-style eatery reached a new level with its indulgent boxes of crispy tater tots smothered in gravy or cheese.  1830 E. Carson St., thepubchipshop.com.

There’s always something new to discover among the assorted decorations of Family Restaurant in Carrick. The restaurant makes for a great meeting place and features succulent shish kabob, shawarma, savory pies and other Middle Eastern favorites.  2614 Brownsville Road, 412/881-8550. 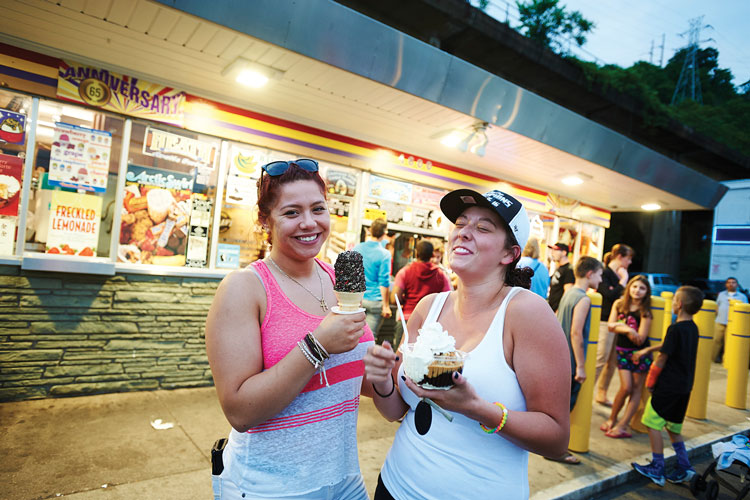 The famously long line at Page Dairy Mart at the edge of the South Side Flats gives you ample time to change your mind (at least twice) while you wait. Page’s has an array of soft-serve ice-cream flavors, milkshakes and hot snacks — but the specialty sundae with Nancy B’s cookies takes the cake.  4600 E. Carson St., pagedairymart.net.

For a satisfying cup of coffee as dark as you’ll find in town — or however you like it — visit Black Forge Coffee House in Allentown. The coffee house sources its coffee and baked goods locally and doubles as an event space for concerts, comedy shows and club meetings.  1206 Arlington Ave., blackforgecoffee.com. 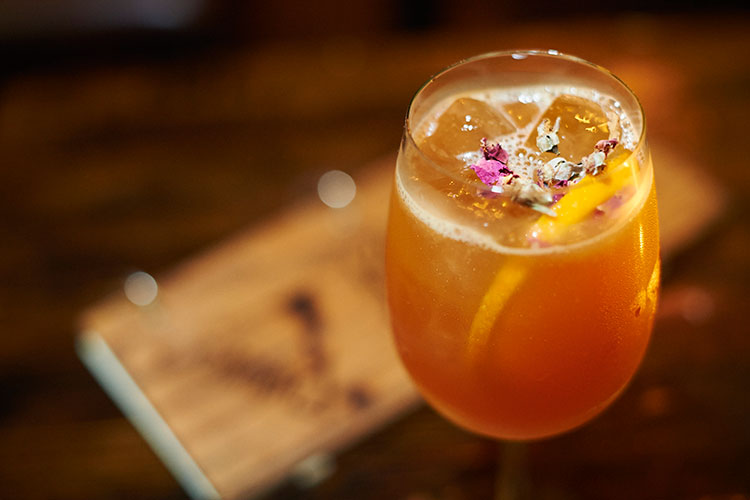 There should be another word besides “gastropub” for a bar that specializes in eclectic bar foods and fancy seasonal cocktails — just so we can give The Summit on Mount Washington its own distinction. Sure, there are craft beers, but people come for the peach juleps, autumn smashes and other inspired cocktails, too.  200 Shiloh St., thesummitpgh.com.

There are plenty of places in the South Side Flats to get a beer, but when you want to treat yourself to a swanky cocktail served in ornate glassware, stroll over to Acacia.  2108 E. Carson St., acaciacocktails.com.

Keep up with all of the clever, topical T-shirts that yinzers love with your regular patronage at Commonwealth Press in the South Side Flats. Retire that old Pirates shirt and pick up new threads that will help you make fast friends around town.  1931 E. Carson St., cwpress.com.

Treat yourself to a juicy chocolate-covered strawberry or a crunchy chocolate turtle at Esther’s Sweet Shop in Carrick and take note of the unique chocolate-drizzle patterns.  1814 Brownsville Road, 412/884-4224.

For less than you’d spend at a movie theater, you can go to Games N’at in the South Side Slopes for unlimited pinball, arcade games, pool and air hockey. The arcade is BYOB; the upper floor features four duckpin bowling lanes with nifty string pinsetters that you have to see.  2010 Josephine St., sites.google.com/site/gamesnatsite. 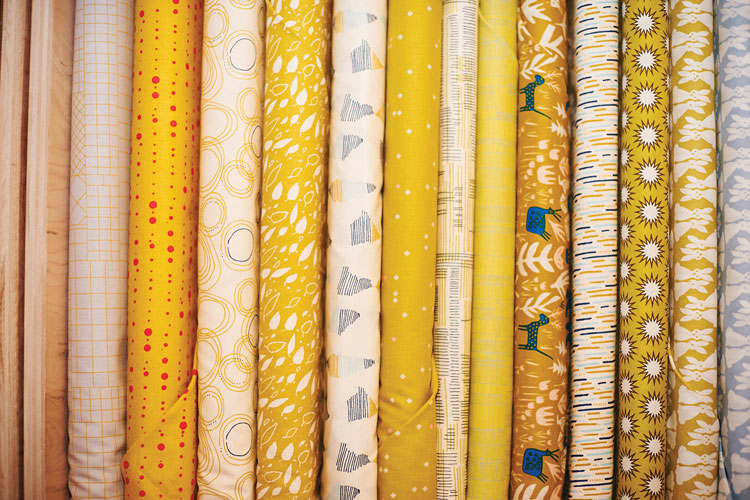 On Saturdays evenings in the summer, bring a picnic blanket to Grandview Park in Mount Washington for Cinema in the Park. At dusk, the city skyline sets the scene for a free, family-friendly cinematic adventure.  Bailey Ave., pittsburghpa.gov/citiparks/cinema-grandview.

Pittsburgh is a city woefully short on hidden-gem restaurants, but Kavsar, an Uzbek restaurant on Mount Washington, is one of them. Tucked on a residential side street away from the tourist hubbub, the halal restaurant serves the cuisine of the high-mountain Silk Road, blending eastern and western flavor profiles in dishes such as lagman, manti and nuhot suhurak. Make sure to get an order of the homemade Uzbek bread. (16 Southern Ave., kavsar.net) — Hal B. Klein 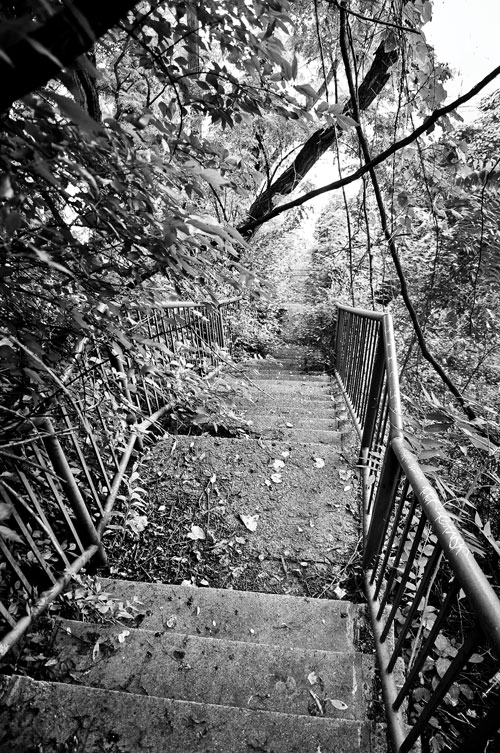 The 712 sets of public city steps in Pittsburgh are fascinating sights to behold. One neighborhood that has a lot of them, naturally, is the South Side Slopes. On one day in October, you can join the neighborhood association for StepTrek, a family-friendly, self-guided tour. It’s not only good exercise with breathtaking views, it’s a good item to check off the bucket list — Pittsburgh has more public city steps than any city in the country. (southsideslopes.org/steptrek)
— Lauren Davidson