Say Yes to Your Dress 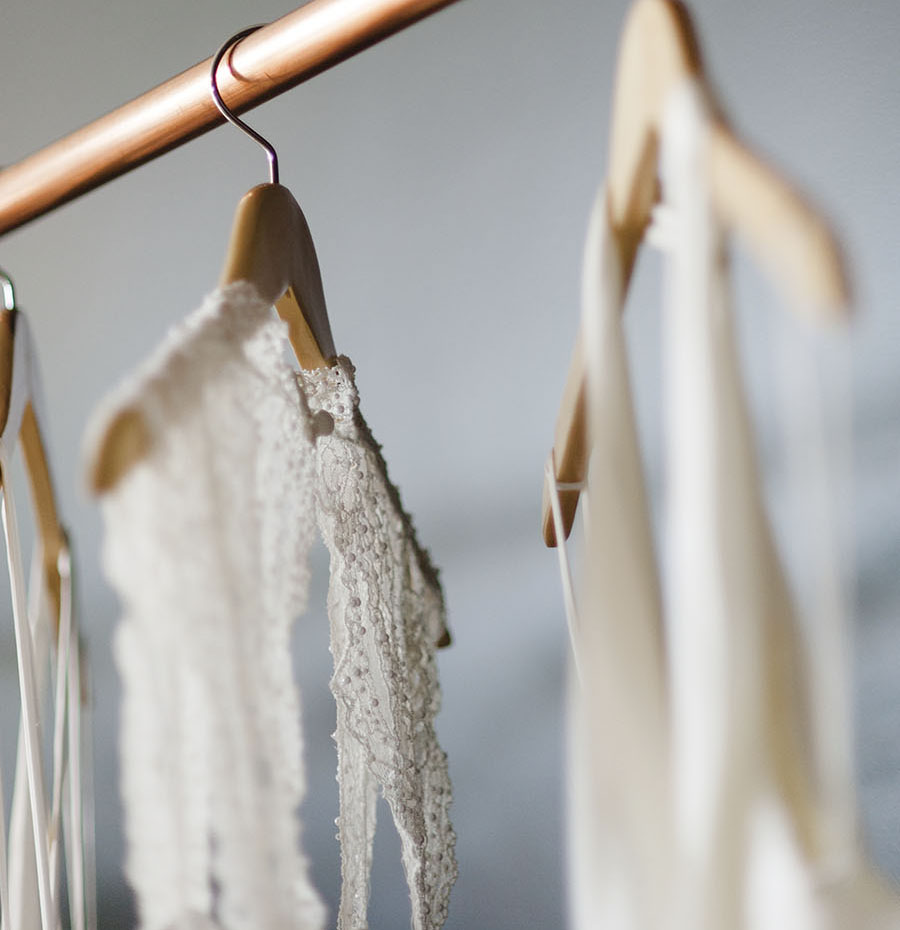 Many brides are happy to hunt for and select the perfect dress that speaks to them from among hundreds of ready-to-alter-and-wear styles introduced every year. Others may want something a little more personal. Those brides may wish to explore the idea of commissioning a custom-made gown, creating or remaking a gown with the help of experts or browsing
creations of relatively unknown designers who favor nontraditional styles. In and around Pittsburgh, three shops aim to accommodate brides who are determined to walk down the aisle
in a dress they’re not likely to see anywhere else. 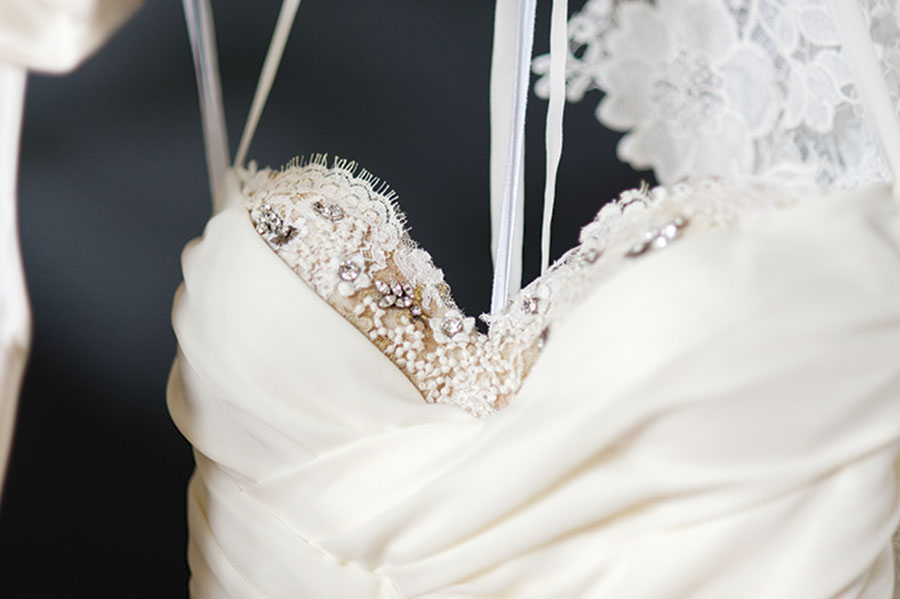 GLITTER & GRIT.
When Erin Szymanski was preparing for her own wedding in June 2012, she knew she wouldn’t be wearing a traditional dress. She found her gown — a more casual white dress by Wai-Ching with green ties and a yellow train — online. Still, she knows not every girl is willing to purchase a wedding dress sight-unseen.

So Szymanski, who has a degree in business management, decided to open a shop to serve other brides with taste similar to hers. She says Lawrenceville was an ideal location for the offbeat but classy store she envisioned. She found a spot on Butler Street with large display windows and opened Glitter & Grit in June 2013.

All of her clients are appointment-only, allowing her to spend time one-on-one with each bride-to-be. All of her dresses — she carries about 40 at any time — are handmade. Some are vintage-inspired, and most are nontraditional silhouette styles with less volume than more typical gowns with ball skirts or trains.

“They’re sleek designs, great for the no-fuss bride,” she says.

She carries independent designers from across the country with small operations and limited distribution; some of them also are open to doing custom work if a bride requests it. Some of her dresses come from more well-known designers who are not carried in other local stores, says Szymanski. 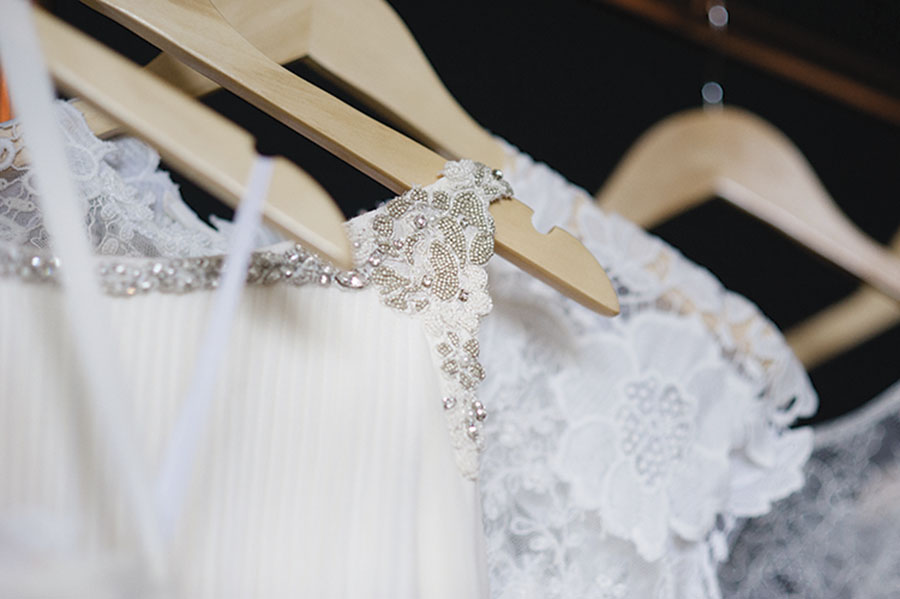 “Pittsburgh was definitely ready to have some options for something alternative,” she says.

None of the designers she carries now is based in Pittsburgh, but she does carry locally made jewelry. She says she chooses dresses based on market trends.

“That’s sort of a smaller trend in weddings, to have everything be eco-friendly,” she says. 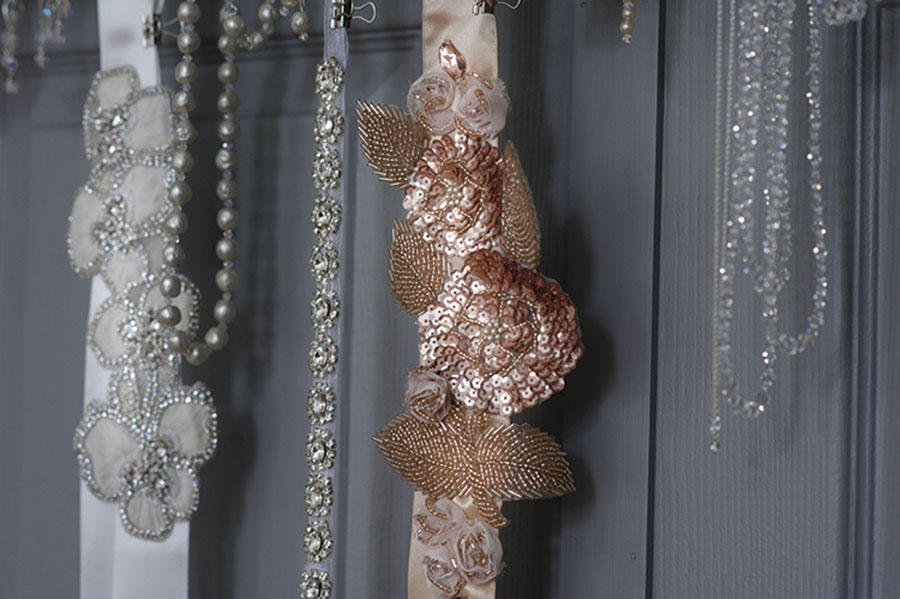 “In the back of my head, I knew I wanted something more vintage-style [and a] lighter weight” than heavier, more elaborate gowns she’d seen elsewhere, says Mueller. “Every gown I put on I felt like I could slip into bed with it because it was so light.”

She tried on many of the dresses Szymanski had in stock, but she liked some Nicole Miller designs she saw online. She bought a dress after Szymanski ordered samples for her to try on.

“I had decided at the end of the [first] session I didn’t really want to go anywhere else,” says Mueller. “[I knew] if I’m going to find my dress, it’s going to be here.” 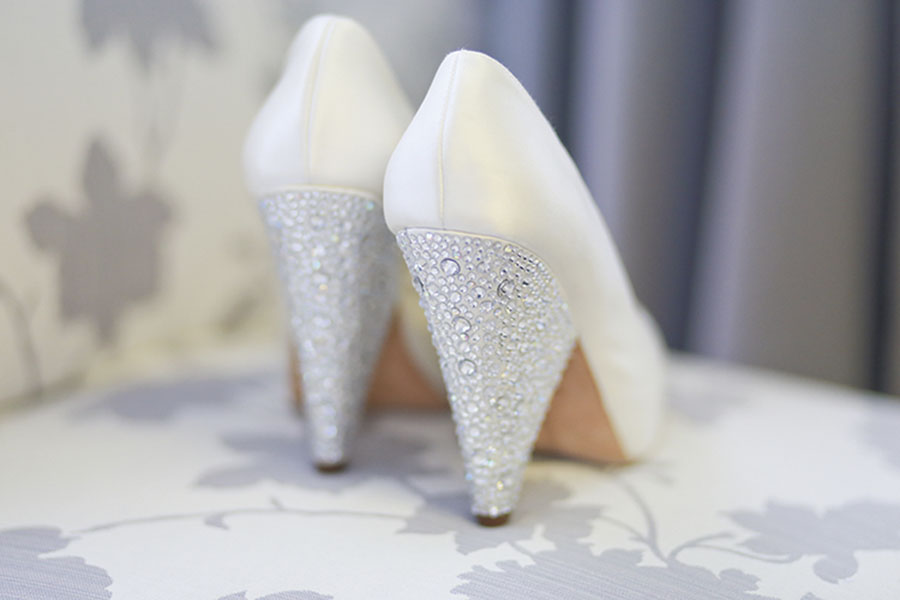 RIBBON BRIDAL.
Melanie Vaughan is quick to say custom dresses are not for every bride.

“Some brides want to purchase something already put together, and [then] there are brides who want something more specific, and those are our brides,” says Vaughan.

Ribbon began offering custom design shortly after the shop opened in 2009 and Arlette Kronk, of Monaca, came on board. Vaughan knew of Kronk’s design work on a wedding gown for a friend of Vaughan’s and for others in Beaver County — notably “Survivor” star Amber Brkich’s dress for her televised island wedding to fellow contestant Rob Mariano. Kronk also made dresses for other members of Brkich’s family.

“We’re so lucky to have her on board,” says Vaughan. 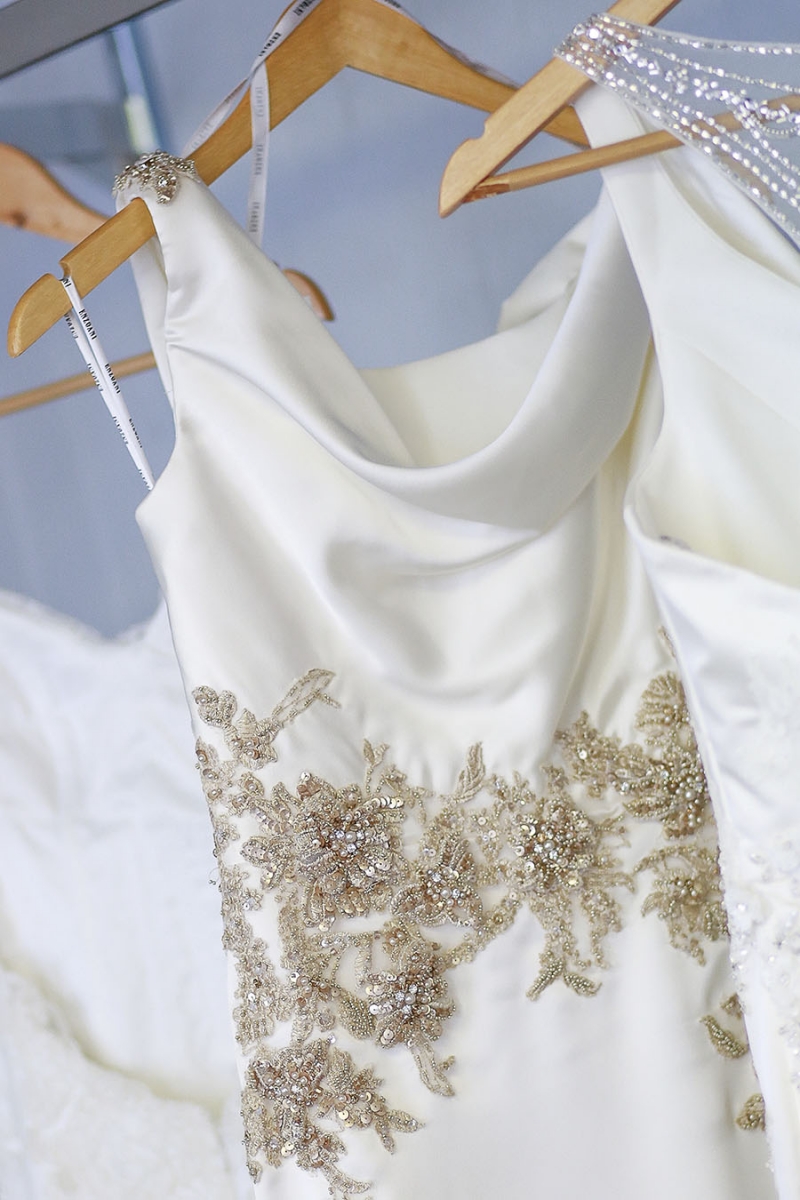 One of Kronk’s dresses made for Ribbon in 2013 incorporated two pieces, although it could be mistaken for one. More and more brides are looking for a long dress for the ceremony and a shorter style for the reception, says Kronk, who taught herself to sew about 30 years ago.

“The girls I sew for — sometimes they see a dress for $10- or $15,000, or they see a dress on the red carpet, and I design [a similar version] for them,” says Kronk, who makes a new dress for the bride-to-be and keeps the originals in the hope that her young granddaughters may want them someday. 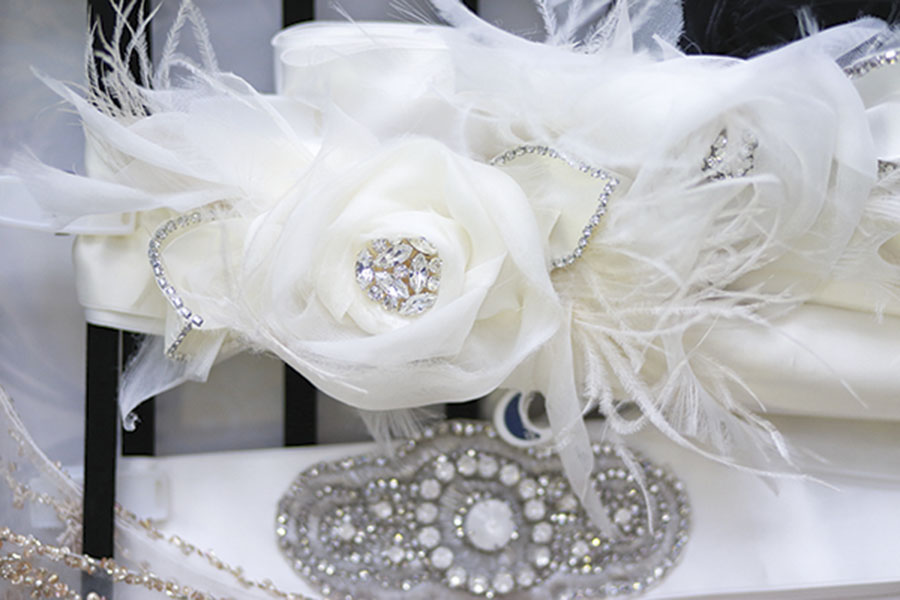 Ribbon specializes in personalizing gowns by popular designers from its stock — from adding a sash and custom veil to a simple gown to designing the jewelry that complements the ensembles of a bride and bridesmaids.

“Just by adding a sash or one beaded sleeve, you can change an entire dress,” says Vaughan. “Because we customize so much, we can make it exactly the way they want it.”

Colleen Bankovich, who has worked at Ribbon since it opened, designs belts, head or hair pieces, veils and jewelry, among other “extras,” and will work with a bride throughout her fittings. In 2010, she also started her own company, Kata Banko Couture, to sell her creations to other stores. 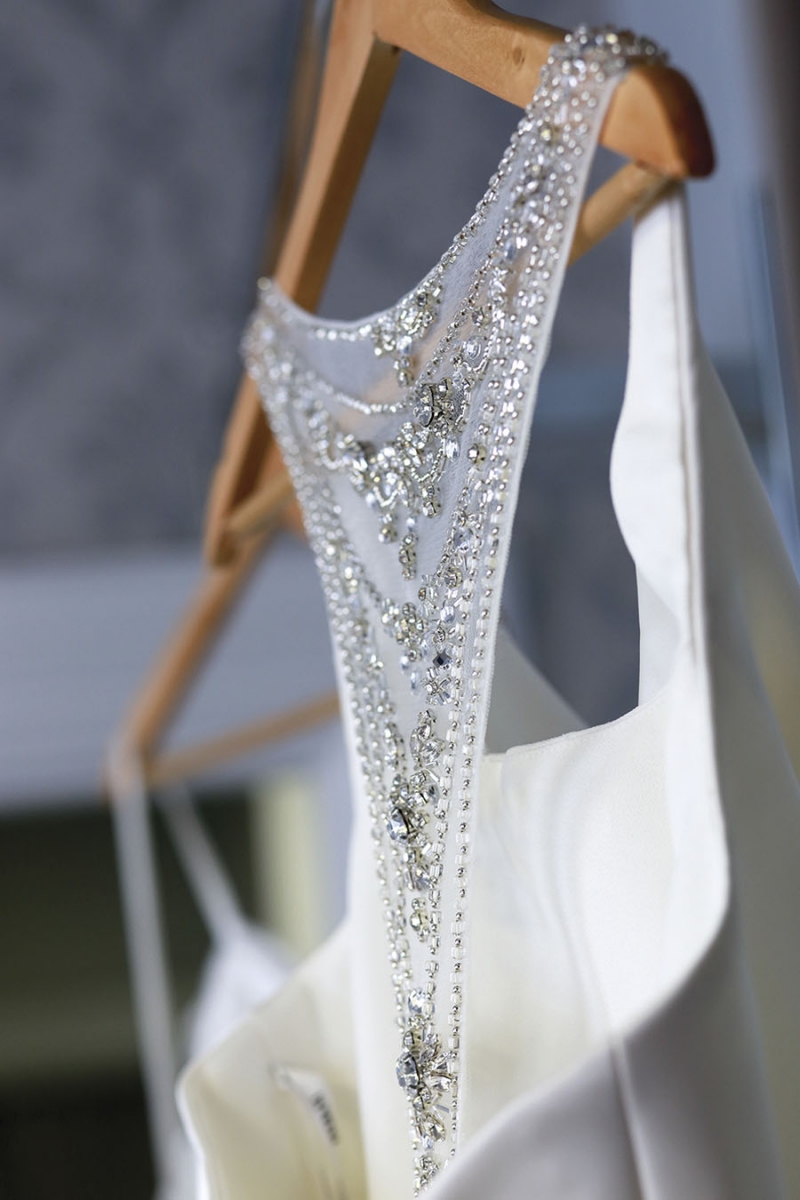 “I’d say she’s now in 40 stores across the nation,” says Vaughan. “She can look at a bride’s colors and say, ‘Let’s incorporate blush into the sash, but the bride gets to pick where it goes.’”

“It’s nice because you get the bride who comes in and she doesn’t want run-of-the-mill, so she gets to pretty much design her whole look,” says Bankovich. 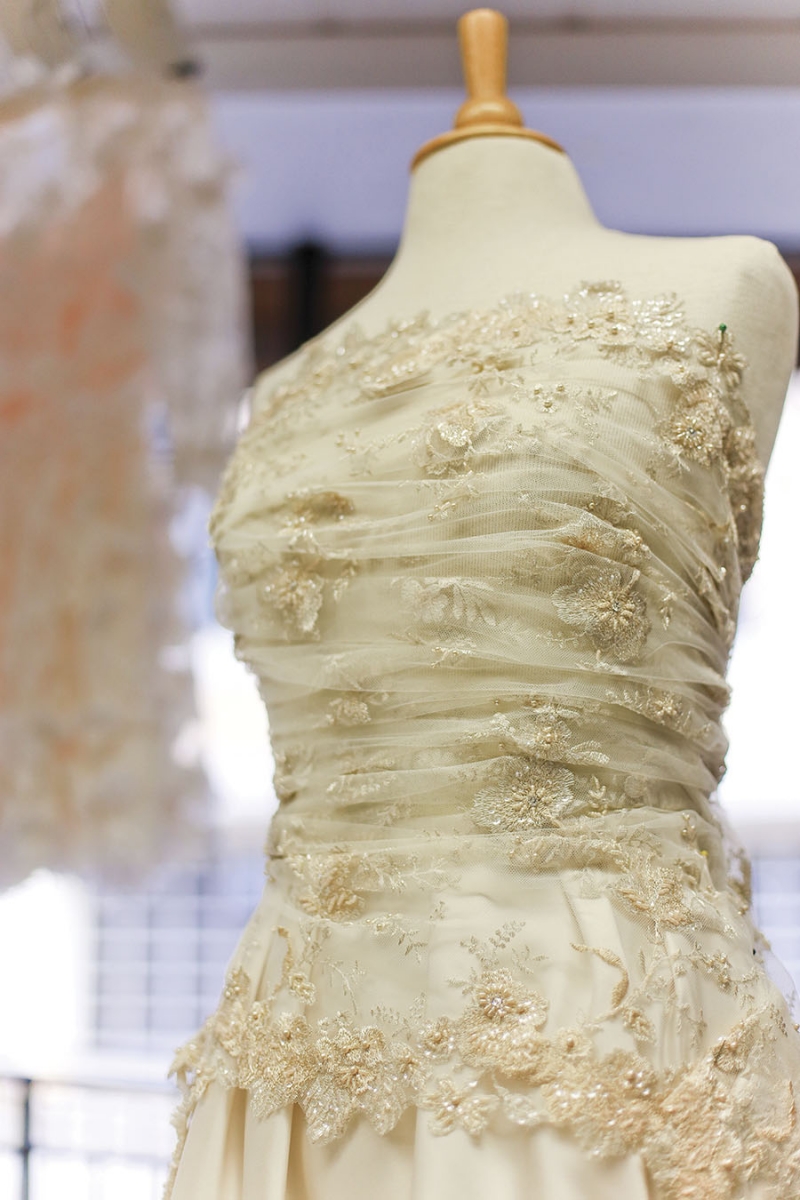 MODA DONATELLA.
Donna DeGuilio, a graduate of the Clarissa School of Fashion Design in Pittsburgh, made her own wedding dress eight years ago. For the last 20 years, she’s been designing gowns for other brides at Moda Donatella in Mt. Lebanon, the boutique and tailoring shop she owns with her mother, Vienna Vizzoca. Her mother, the store’s seamstress, picked up the trade in her native Italy, where she says her brother also was a sought-after tailor.

DeGuilio orders fabrics from all over the world and from Fabric Place, a few blocks from her shop.

“If someone’s getting it made, they want a good fabric,” says DeGuilio. “It’s something they’ll most likely have forever.”

Some brides arrive with an idea, and DeGuilio hunts down the perfect materials, drafts the pattern and cuts the fabric. Her mother takes it from there.

“It’s one-of-a-kind. You won’t see anyone else wearing it,” says DeGuilio. “It’s a lost art. There’s not that many of us left.” 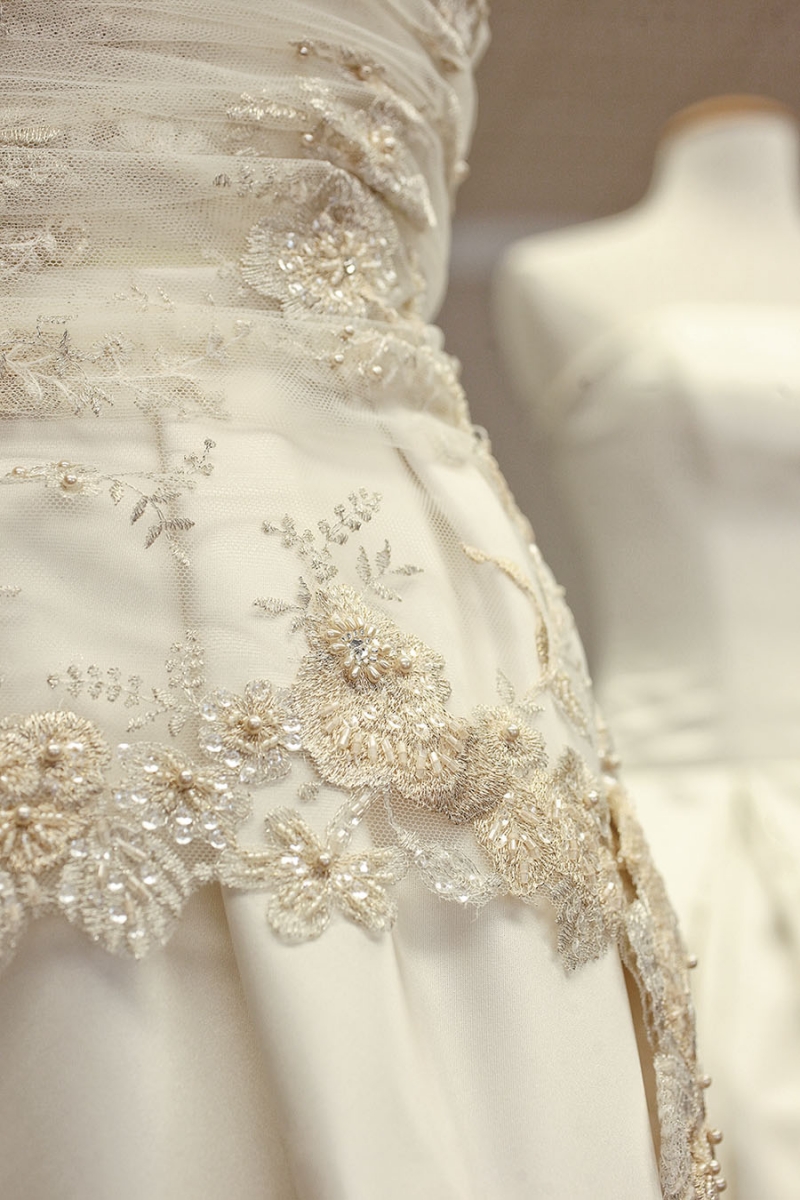 Some brides also bring in family dresses — perhaps worn by their mother or grandmother — to be updated.

“It was a high neck, like a turtleneck almost, with long sleeves,” says Hart, 29, of Squirrel Hill. “I had some ideas of what I wanted, but they really helped [to] show me what I could do and what would look good with the dress.”

DeGuilio and her mother changed the neckline, sleeves and other details of the dress. After searching for six months, they ordered lace from France to match an existing band on the dress front and trim a handmade cathedral veil. 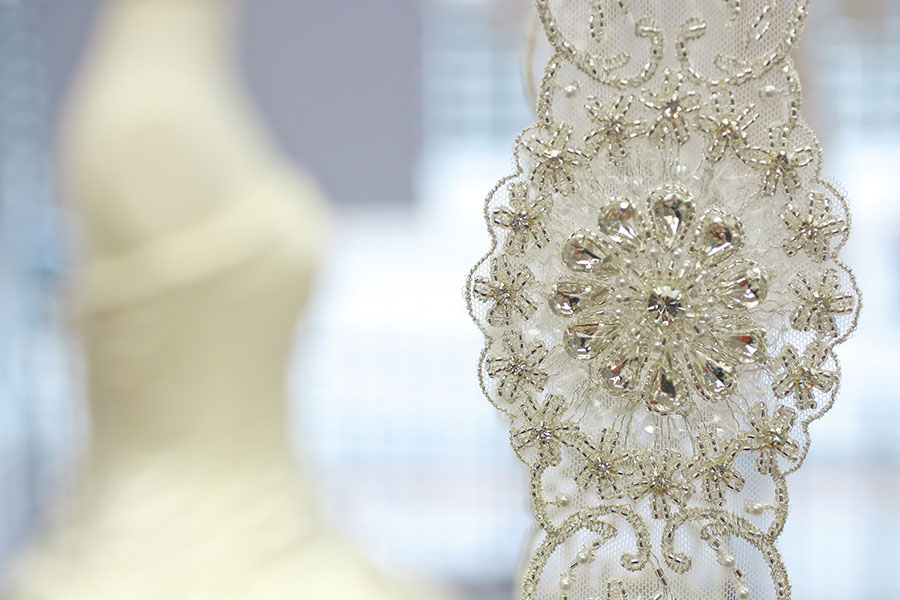 “[My grandmother] was really honored,” Hart says. “It was nice to wear [a dress] that meant something.” At the reception, Hart changed into her mother’s wedding gown, which DeGuilio had shortened and altered.

Hart’s mother-in-law, Maureen Hart of Fox Chapel, decided to ask DeGuilio to make her dress for the day as well. DeGuilio created a blue silk-taffeta style.

“I didn’t want sleeveless, but I didn’t want to be matronly,” says Maureen Hart. “They really came up with the right look for me, and because it was fitted it was comfortable.”

This article appears in the February 2014 issue of Weddings.
Categories: Bridal Buzz