Ryan Shazier Can Get the Job Done

The new Steelers linebacker brings more than speed and athleticism with him to Heinz Field. 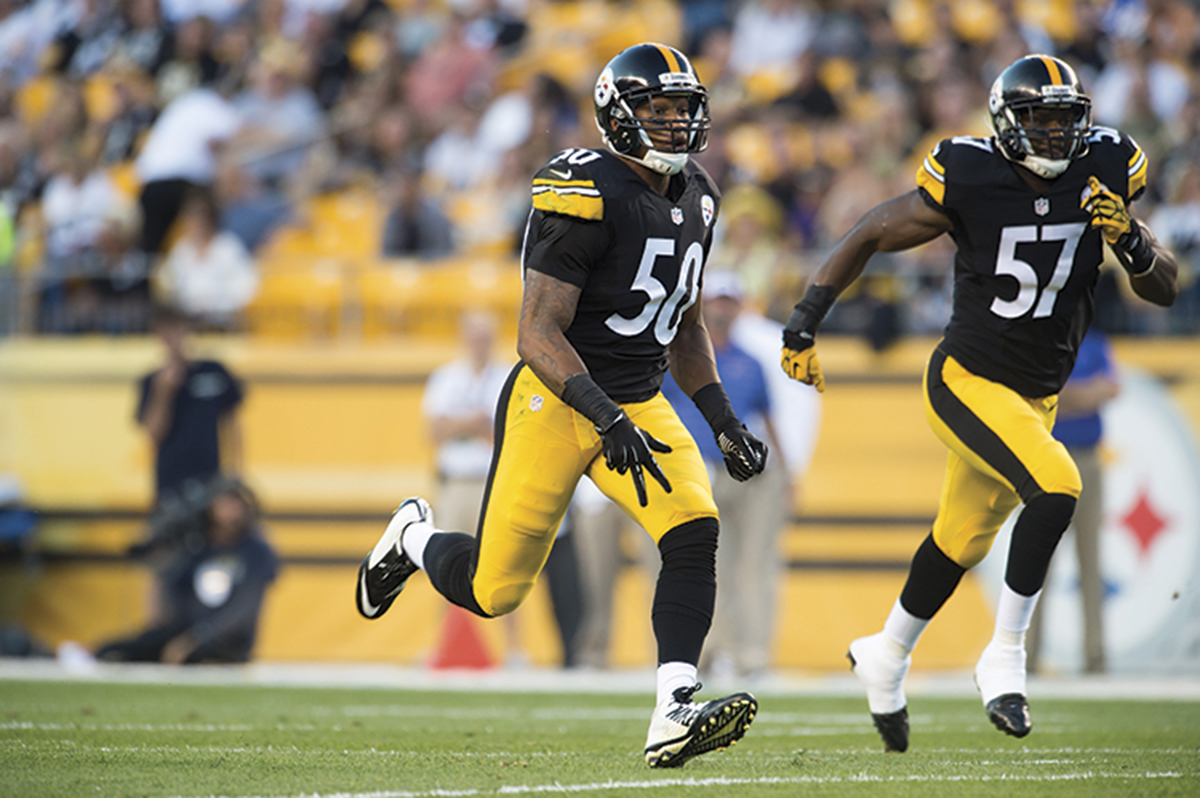 
Pittsburgh Steelers first-round draft pick Ryan Shazier’s story is one of athleticism and adversity, of competition and compassion, of selflessness and self-discovery, of achievement — and alopecia.

“I got it when I was about 5 years old,” Shazier explained of his experience with the condition that causes bald spots and the disappearance of body hair. The condition explained why the 22-year-old from The Ohio State University had no hair and no eyebrows in his first local public appearance.

“I was probably the only little kid walking around with a bald head,” he says. “And it was kind of tough because kids are mean. Most kids aren’t bald-headed or have patches in their hair when they’re 4 or 5. I was getting picked on.

“We went to the doctor and found out what I had, and everything was fine after that. Sometimes I wore hats, but my mom didn’t want me to. She wanted me to feel good about myself so I didn’t have to try to shy away from everybody else. I told people, ‘If you’re not going to accept me for who I am, then I don’t feel like we can be friends.’”

“It’s kind of simmered down now, but it was pretty bad,” Shazier says. “It really flared out a lot when she was stressing out. [Shazier] and my little brother used to argue a lot and stress her out. A few times my mom had to stay in the hospital for birthdays, Christmases, things like that.

“We kind of figured out [that if] we were [better] to her and . . . we controlled ourselves for her, she would be better. We had to figure out how to make sure we could keep her less stressed out so we could spend more time with her.”

While neither his condition nor his mother’s disease was an ideal situation, dealing with both was life-changing for Shazier.
“It really helped me out a lot,” he says. “[For] a lot of kids, especially growing up, things are smooth. I feel like that really helped me out when it came to solving problems.”

After that, it was a matter of beating the odds in Broward County, Fla.

“Down here in Florida we have almost 60 percent of African-American males not making it out of high school,” Shazier’s father, Vernon, told The Columbus Dispatch newspaper in 2012.

In response, Vernon provided an example as a coach, as a pastor, as a motivational speaker, as the team chaplain for the Miami Dolphins and as a parent.

“I wanted to make sure [Ryan] did what he needed to do so that he wouldn’t become part of that statistic,” Vernon Shazier said.

Shawn Shazier did, too.

“I feel like my dad and my mom are my two best friends,” Shazier says.

Eventually, he became an All-State and then an All-Big Ten linebacker. He also grew into the type of person willing to change his college number for a game to honor a friend from Plantation High School who died of muscular dystrophy and again to recognize a teammate lost for the season to injury. At Ohio State, he once sought permission to return home with a teammate for the funeral of that player’s father.

“Pure ideas and caring in its pure form,” is how OSU Head Coach Urban Meyer once summed up Shazier to Cleveland.com.
The Steelers recognized commitment and character — intangible qualities they seek out — in repeated interviews with Shazier after he declared himself eligible for the NFL Draft following his junior season at Ohio State.

They’d already seen much of what they needed to see in Shazier’s game two years previously, while evaluating Ohio State prospects for the 2012 draft.

“He used to jump off the film when he was a freshman, honestly,” Colbert says.

At 6-foot-1 and 237 pounds, Shazier is lighter than a traditional NFL inside linebacker. But his 4.36 speed in the 40-yard dash makes him the type of player NFL teams covet. He can cover pass receivers as well as tackle running backs — and thus doesn’t have to come off the field in passing situations.

“Football has become a very lateral, speed-based game offensively,” Colbert explains. “It’s a perimeter game, a down-field game, so we need people [who] can defend that. That was one thing Ryan did very well in college.”

Upon drafting Shazier, the Steelers immediately installed him at inside linebacker next to veteran Lawrence Timmons on the first-team defense. That high-pressure outpost is where he lined up for the first snap of the off-season’s first Organized Team Activity — a testament to the impressive skill set of Shazier, and a rare nod for a rookie trying to find his way in coordinator Dick LeBeau’s defense.

It’s almost unprecedented for Game 1 — and almost unimaginable from day one. But Shazier, when healthy, has been there ever since.

“I like his demeanor more than anything,” Mike Tomlin assesses. “We put him in some competitive situations and just from a demeanor standpoint he’s wired in, he’s dialed in.

“It looks like he’s wired right for the job.”

NFL locker rooms being what they are, Shazier still is taking heat occasionally for what he doesn’t have on top of his head. As he did when he was 5, Shazier is taking it all in stride.

This article appears in the October 2014 issue of Pittsburgh Magazine.
Categories: From the Magazine, Steelers