Rubber Ducky, You’re the One

The Pittsburgh International Festival of Firsts is an Olympian undertaking that brings in artists for their U.S. premieres. 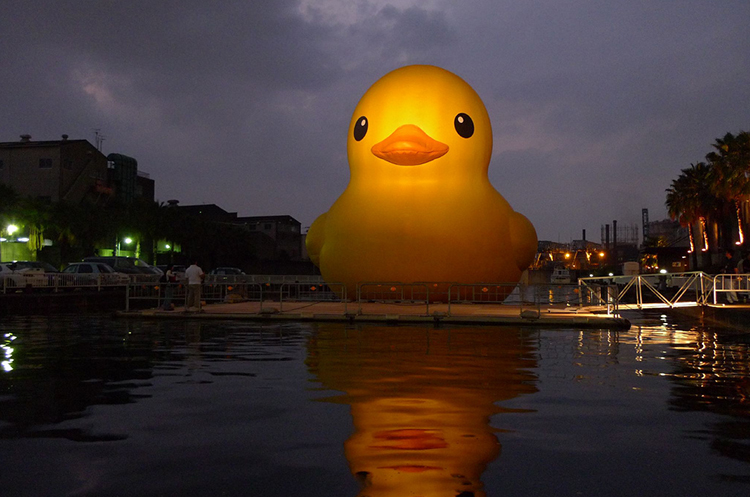 The Rubber Duck Project is the size of a small ship: 40 feet tall, 35 feet long and 30 feet wide. It had its maiden voyage in Hong Kong and has been a hit ever since. When the duck floats down the Allegheny River on Sept. 27, the sight will seem hallucinogenic. Enormous as it is, the duck — with its black eyes and perky beak — resembles a cute bath toy. Created by Dutch artist Florentijn Hofman, “The Rubber Duck Project” is a purely whimsical sculpture.

When Paul Organisak, vice president of programming for the Pittsburgh Cultural Trust, invited Hofman to recreate the duck in Pittsburgh for the one-of-a-kind International Festival of Firsts, he had one major fiat: The duck could not swim anywhere else in the United States until the end of the year. The giant installation is so engaging that Organisak knew other cities’ curators would try to nab the idea.

“I didn’t want to see another duck show up in New York,” Organisak says with a laugh. “People are banging down the doors to get another duck. But for the next few months, we have it exclusively.”

Organisak has one of the most exciting jobs in the city: He travels the world searching for artists to bring to the Cultural District. He has countless other duties and numerous long-term projects as well.

The Pittsburgh International Festival of Firsts is a point of pride for him. During any given week, Organisak could be in Washington, D.C., or Monte Carlo searching for sculptors, actors, dance troupes and multimedia gurus. In the past, all of these artists have come from other countries; this year, a few participants are based in the United States. There’s one requirement: The festival appearance must be the U.S. debut for each featured work.

“In many ways, I think it’s a major gift to the city,” says Organisak. “That sounds a little lofty, but it is a gift. We hope that the work in the festival excites and stimulates new audiences. Oftentimes the term ‘contemporary’ is off-putting. People feel they won’t get it. ‘Contemporary’ to me is ‘of its time.’ I hope that this festival shows a new definition of contemporary.”

Organisak says that, years ago, former Trust CEO Carol Brown imagined a performing-arts complement to the Carnegie International, which showcases global artists every four years (it debuts Oct. 5 at the Carnegie Museum of Art). Brown wanted the Festival of Firsts to highlight performers from around the world for the first time. The inaugural festival took place in 2004 and was successful; the 2008 installment was even more popular.

“I can’t tell you how many times people have said, ‘That show in 2008 changed my life,’” Organisak recalls. “The festival enriches local arts as well. We are very fortunate to have the breadth and depth and variety of our own Pittsburgh artists, and the festival puts Pittsburgh on the international map. It’s a major undertaking and a major financial commitment for the Trust.”

Meanwhile, the festival’s month-long run keeps audiences engaged. “Instead of spreading it out over the course of a year, where the energy can be diffused, we have had a lot of success keeping it tight and focused,” says Organisak.

The variety of works — and their imaginative power — is too broad to list, but there are some standouts: Kiss & Cry, created by the Belgian pair Michèle Anne De Mey and Jaco Van Dormael, is the story of a woman reflecting on her long life as she nears the end, blending film, dance, text and theatre. Zimmerman & de Perrot — presented by the Pittsburgh Dance Council and performed by Swiss company Hans was Heiri — is like a postmodern circus that defies gravity within a revolving box. For full-blown decadence, there’s The God That Comes, Hawksley Workman’s one-man retelling of the story of Bacchus, the Greco-Roman god of wine.

Sure, there’s always something going on in the Cultural District, but the festival is a particularly lively affair. It will include roughly 20 performances and two world-premiere visual-art installations throughout its time here. The Pittsburgh International Festival of Firsts is one heck of an event to coordinate, and Organisak’s team must consider transport and other aspects.

So, how’s that duck coming along?

“The logistics of the duck …” says Organisak, trailing off before chuckling again. “I knew it was going to be huge, but I had no idea.”

This article appears in the September 2013 issue of Pittsburgh Magazine.
Categories: Things To Do