Rough Weather Ahead for the Pirates?

An assessment of the impact of last year’s victories and early-season struggles on the Pittsburgh Pirates locker room. 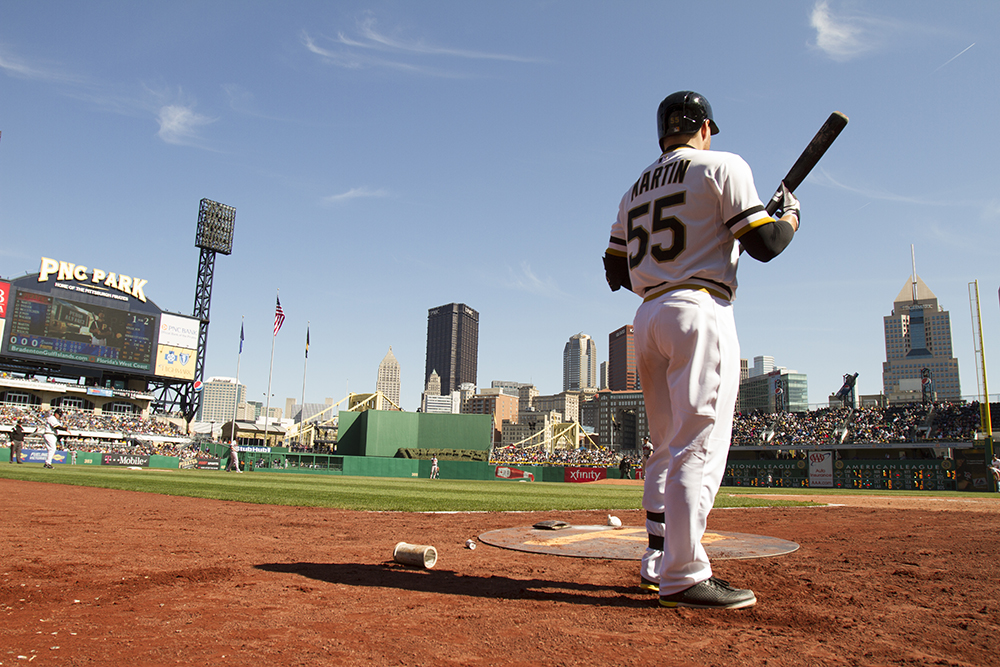 This isn’t how the story goes. Through the final out of last fall’s National League divisional-round playoff series between the Pittsburgh Pirates and the St. Louis Cardinals, the Pirates’ redemption movement was moving through a nearly mythological structure. The charismatic, confident coach arrives to steady the ship. A world-class rookie begins a determined march toward a Most Valuable Player award. Success is tasted amid losses and struggles, and each season gets a little bit better. At last, the demon on the team’s back is vanquished, and October baseball returns to the North Shore.

Even the Pirates’ exit fits neatly into the narrative: The team broke the losing streak and made the playoffs but still had more to learn. The players pressed on — all the way to a deciding Game 5, remember — but there was more work to be done.

It’s right about there that the structure of this fable starts to break down.

Here’s how it was supposed to go: The front office makes some shrewd moves and addresses pressing concerns over the offseason. The Pirates come out of the gate hot, immediately entering the razor’s-edge struggle for National League Central supremacy that made all those August and September games against the Cardinals and Reds so enthralling. They win a few; they lose a few. Then Jameson Taillon and Gregory Polanco ride white steeds from Indianapolis, and every team in the National League starts to fear a series with the Pittsburgh Pirates.

Here’s how it went: Amid a tough free-agent market and ubiquitous financial concerns, the front office made slight, predictable offseason maneuvers. The Pirates came out of the gate lukewarm, shuffling around the middle of the NL Central ranks and getting kicked around by the upstart Brewers. They win a few; they lose more. Jameson Taillon undergoes Tommy John surgery, Gregory Polanco stays in Indianapolis long enough to impact the health of every Pirates blogger, and few teams in the National League fear a series with the Pittsburgh Pirates.

“When you get your foot in the door, I think there [are] growing pains,” says reliever Jason Grilli. “With a new season, everyone just expects it: ‘Oh, we’re just going to do that again.’ Well, no. It’s a new season.”

Utilityman Josh Harrison also takes a no-nonsense attitude with regard to last year’s success. “Last year means nothing, especially when it comes to this year,” he says. “It’s a new year. Every day is a new day. And regardless of what’s happened — or where we are — we just gotta keep pushing. And we’ve got a group of guys who really want to win. We’re not gonna give up.

“Baseball is a humbling sport. You gotta come in ready to work — and don’t think that anything’s gonna be given to you.”

Harrison, who’s appeared in five different positions as of early June, has been a pleasant surprise, posting improved numbers in batting average and on-base percentage while showing flashes of defensive brilliance. Unfortunately, Harrison is the exception to the rule. Several players the Pirates had pegged for strong, or at least serviceable, seasons floundered. Infielder Travis Ishikawa, one of the few offseason acquisitions to make the big-league club on opening day, didn’t last through April. Injury-plagued starting pitcher Wandy Rodriguez was made to walk the plank May 22.

Yet even with more than a handful of defeats and a shaky-at-best lineup, the mood among these Pittsburgh Pirates has changed. In 2008, journeyman first baseman Doug Mientkiewicz bemoaned the lack of interest and effort he saw among his Pirates teammates, calling the locker room a “ghost town” after beating up an equipment box in a postgame meltdown. Years earlier, rumor had it that long-suffering Pirates catcher Jason Kendall greeted new arrivals with the phrase, “Welcome to Hell.”

That’s not the Pirates locker room of 2014. Confidence and optimism are the norm, and defining victories — such as the Bucs’ first-ever regular-season win over the New York Yankees on May 18, or the May 24 edging of the Washington Nationals in a pitchers’ duel between young Pirate ace Gerrit Cole and Nats wunderkind Stephen Strasburg — resonate. After a handful of limp outings in May, the team rallied to hover around the .500 mark by early June.

“I think we learned a lot last year, just from being in the playoffs,” shortstop Jordy Mercer says. “I think we can go farther just because of [that] experience . . . anytime you’re in that situation, it makes the next year really exciting. Coming into spring training, everybody was all jacked up. It was awesome.”

“We’re built on pitching and defense and timely hitting. The recipe is there,” says second baseman and hometown favorite Neil Walker. “[We] just [have to focus on] growing and taking that next step — being an upper-echelon organization again.”

Matching last year’s 94-win mark will be a tall order at this point, and exceeding it would take a hot streak for the ages. With Milwaukee overachieving early and the Reds and Cardinals still playing serious baseball, there is no easy path to another playoff berth. A reliable starting rotation would go a long way; an end to the batting-order merry-go-round would help.
Before 2013, every pundit would’ve counted the Pirates out at this point, but last season did more than just give beleaguered fans of the Buccos something for the memory box — it changed the tone within the organization and beyond it.

“We’re gonna keep fighting, and we know what we’re capable of,” Harrison says. “We’re not going to be satisfied until we reach what we want to reach.
“Last year was good, but we all want more.”

This article appears in the July 2014 issue of Pittsburgh Magazine.
Categories: Pirates