PittGirl joins the Pittsburgh Marathon without breaking a sweat. 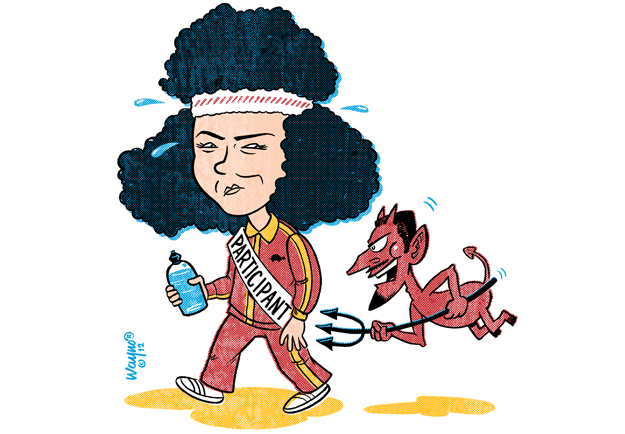 Or as my friend Gina once said, “If you see me running, RUN … because I am being chased by something terrifying.” Amen.

I don’t run unless I have no other choice — and even then, I must be absolutely certain that all other options have been exhausted before I put any sort of trot into my lazy gait.

About to miss my bus? …Could I catch another in 45 minutes? My dog is about to roll in deer poop with the joyous abandon of a pig that has discovered fresh mud? …Is he due for a bath anyway? My kid is in the kitchen about to sink her grubby little fists into the Texas sheet cake I baked for a dinner party? …Do I have time to stop at the Iggle for a bakery-made apple pie? There’s an angry bear after me? …Will he make it painless?

I knew early on that I simply wasn’t built for speed. Or endurance. Or athleticism.

As a preteen, I tried track and field — and before you question how I could even try track if I was so terrible, it was a church-sponsored team. Everyone made the squad in Jesus’ name. If an arthritic groundhog with gout showed interest in track, it would have made the cut. And might’ve become captain.

I recall running 50-yard dashes, where I would take off at the crack of the starter pistol and would lead the race for about half a pace. During that brief stretch, my brain would travel at the speed of light: OMG. You’re winning. No more “participant” ribbons for you. You are actually going to win a ra — Then the other runners would activate hyper-speed while my internal spaceship would experience a complete loss of power, leaving me and my burning lungs in dead last.

I fared no better in distance races, probably because I considered 200 yards to be a “distance race.” I wondered why there weren’t any water stations at the 100-yard mark. Or why no one covered me with a foil blanket when I deliriously collapsed across the finish line.

By the time I quit running in high school, I had enough “participant” ribbons to sew a quilt fit for an elephant. I did have a fourth-place ribbon, but I’m pretty sure it was for either shot put or a race in which fifth place went to an arthritic groundhog with gout … so I don’t feel right bragging about that.

When I made the tennis team in college, running was regretfully reintroduced into my life. I did not cordially shake its hand; I glared unwelcomingly at it like it had kicked my puppy. Tennis practice began with a mile-long “warm-up” run. In the middle of the first lap, my lungs would burst into flames. By the end of that lap, my teeth were throbbing (because lung fire apparently travels up your esophagus and burns your teeth). By the middle of the second lap, the barrette that had been precariously clasped around my huge, curly, Chaka Khan-ish mane would burst open with an audible snap and land on the track behind me. So instead of looking like a girl running laps, I now looked like a crazed, asylum-escaped lunatic fleeing her demons. By the third time around, I was walking like a newborn horse, my liberated hair matted to my soaked face like a lustrous full beard. I’d dry-heave violently enough that the exasperated coach would holler at me to just hit the courts.

“Participant” (who didn’t even finish).

This month marks the fourth Pittsburgh Marathon since its rebirth in 2009 — and the fourth year that I’ve said to myself, I could never do that. I am in awe of those who run because I simply can’t — but if by some miracle I did, I would have “26.2” tattooed onto my forehead in 48-point font. I don’t break through the proverbial runner’s wall; I run smack into it like a crash-test dummy. While I’ll never be a heart-rate-monitoring, endorphin-jonesing, weather-resistant running lunatic, I am happy to tell you that this year I am taking part in the Pittsburgh Marathon.

“Participant” ribbon! The elephant will be pleased.

This article appears in the May 2012 issue of Pittsburgh Magazine.
Categories: From the Magazine, Hot Reads, PittGirl