Why the NFL Commissioner has a future career in politics. 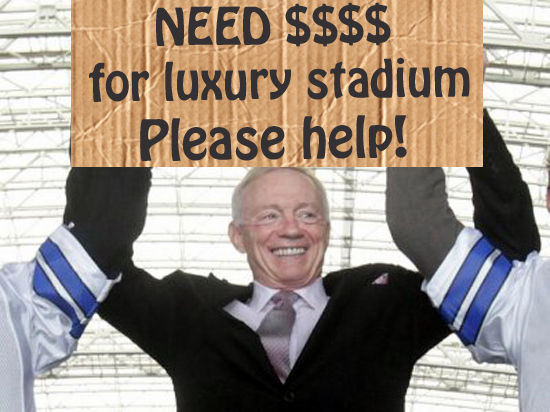 Standing in the shadow of his audacious, 160-foot video screen, Cowboys owner Jerry Jones proudly told “60 Minutes” cameras last year that he paid $50 million for the monstrosity. Then a few minutes later, he compared the current NFL business model, the one that rakes in $9 billion a year, to a car wreck.

“It’s for the fans that the owners are taking the stand we are right now,” Jones said solemnly.

Everything’s bigger in Texas, even the bullshit.

By now, Americans are used to being lied to. We are used to being gouged. So we turn to football to distract ourselves from these small, mounting injustices. We find simplicity and truth in men testing their wills against one another, never mind that the action takes place in palatial estates with 26,000 square feet of televisions.

Only now, America’s pastime is starting to seem just as rigged and crooked as the world it lets us escape from. The NFL’s leader, a walking lie with helicopter-parent hair named Roger Goodell, dropped this doozy when discussing the ongoing NFL Lockout with Tampa Bay Buccaneers fans in an online chat last week:

"We can’t continue to shift the cost, whether it’s the rising player cost or the rising cost of operating an NFL franchise, on to our fans," he said.

Think about that sentence for a moment. Savor it. Let its hypocritical preposterousness and slimy froth swish around in your mouth like a gulp of Two Buck Chuck. If that sentence had legs, it would give you a hug, swipe your wallet from your back pocket and then ask if you could spare some change for a cab ride home.

Goodell’s spin is breathtaking. In a world of $10,000 personal-seat licenses, $85 replica jerseys and $9 stadium beers, Roger Goodell is fighting this lockout for you, the fan.

Hell, maybe he is being honest in his own distorted way. How much more can the league charge you for a beer or a parking pass, after all? They’ve brainstormed just about as many ways to gouge you for three hours of entertainment as humanly fathomable, so the only way they can grow their profits is to gouge the players themselves. 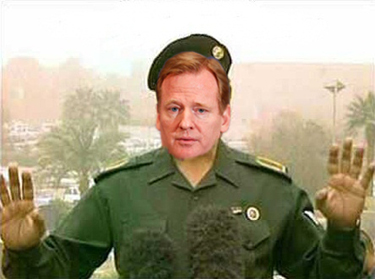 Goodell’s public comments are starting to resemble those of "Comical Ali," the Iraqi public information minister who told the world that American troops were running scared, even as buildings exploded behind him.

Let’s not forget that it is the NFL’s explicitly stated goal to triple its revenue to $25 billion per year by 2027. Where will that extra cheddar come from? The fan, of course. And not just in obvious ways, like the Versace-priced extortion that is NFL apparel. But in invisible ways, too. Ever wonder why your cable bill is so high? The NFL is charging television networks like NBC, CBS, Fox, ESPN and Direct TV more than $20 billion to broadcast games through the 2013 season.

In turn, those networks, ESPN in particular, charge cable providers such as Comcast and Verizon an arm and a leg. The cable giants then pass that cost on to the consumer, whose TV bill now runs $50 a month and up ($58 if you want the privilege of watching the NFL Network). Yet paying that premium still doesn’t guarantee that you’ll be able to watch your favorite team on Sunday because, if your stadium isn’t sold out, the league will black out the game in the local market.

The NFL blacked out 23 games in 2010, including 15 in Tampa and Oakland, where ticket prices average $90 and $115, respectively. Even in the midst of the Great Recession, the NFL offered no relief to fans in those markets. They huddled around radios or watched patchy internet streams. Their $50 cable bills were not sufficient.

Since 1990, NFL teams have received more than $7 billion in taxpayer funds to build or renovate stadiums. Seven. Billion. Dollars. Could have built a hell of a lot of schools.

Just how much of the bill have taxpayers footed for NFL stadiums? Of the 31 stadiums built or remodeled in the last two decades, 29 were at least 75-percent publicly financed. Ten of them were 100-percent bought and paid for with your money.

The owners aren’t businessmen. They are welfare queens in $3,000 suits.

And with all undue respect to Mr. Jones, you can’t act po-faced when you charge $13 for a po’ boy sandwich at your publicly funded stadium.

The message of Goodell and Jones is the kind of rhetoric favored by country-club economists: If we pay our players less (so the lie goes), our operating costs will go down and we will pass that savings on to the little guy. Ticket prices will drop. Cable bills will drop. Jersey prices will drop.

Only they won’t because the league has its sights set on aggressive short-term revenue growth that would make the oil industry blush. Actually, the NFL is taking its cues directly from BP, Exxon and Shell. CEO Goodell is schilling big oil’s favorite fairytale: trickledown economics.

But the only thing trickling down is Goodell’s pee on your leg. He’s telling you it’s raining. Hopefully you don’t believe him.

It’s the same farce as the so-called “Steelers Rule,” the new ban on headshots that will supposedly make the game safer. Only it won’t, because the hard science on head trauma has shown that the cumulative effect of small hits over the course of a career is just as damaging to the brain as the kind of knockout blows thrown by James Harrison. The rule will do little to make the game safer. The rule is a sleight-of-hand trick to distract us from the truth, because the truth works against the owners’ agenda.

The truth is that the game will never be safe. Football is an inherently violent and rapturous sport, and that is precisely why it thrills us to the core.

If you don’t believe the NFL’s gladiators should be rewarded handsomely for their service, simply look at Jerome Bettis, who struggles to walk down a flight of stairs some days. Look at “Iron Mike” Webster, who left us too soon; who left us well before his body did. Look at all the nameless grunts who time has forgotten, whose brains don’t care that they were only on the practice squad.

Do rookies earn too much money? The first-rounders do. But remember that Pro Bowl linebacker LaMarr Woodley  made only $550k when he helped the Steelers to a Super Bowl last season. He could have held out, but he kept his mouth shut and risked his career for a shot at the Super Bowl.

The warriors pay the cost for the rest of their lives. The owners, well, they don’t pay for anything anymore. They stretch out their arms and open their palms to the sky like Franco Harris before the miracle at Three Rivers Stadium and say, “More, please.”

What an Immaculate Deception.