If the Steelers reach 7th Heaven at SBXLV, the joke's on Roger. 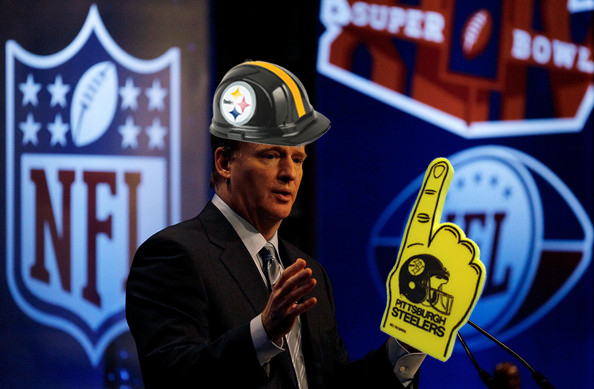 Just picture it: the thousands of flashbulb explosions, the maelstrom of ticker-tape, the Rooney’s taking center stage at Cowboys Stadium while Jerry Jones weeps 10 gallons of tears into his 10-gallon Stetson hat up in the VIP suite.

And then, commissioner Roger Goodell, after handing over the seventh Lombardi trophy to Mike Tomlin, announces that the Super Bowl MVP is not Ben Roethlisberger or Hines Ward or James Harrison, but the person he loves the most:

It would be a fitting choice. After all, no one has been more valuable to the 2010 Steelers than commissioner Goodell.

The Steelers have always needed a bad guy to bring out their best. In Pittsburgh, the road to glory always seems to be paved by disrespect. We like to do things the hard way.

Hence the reason why the Steelers have dominated rivals like the Ravens in recent history (8-2 in the Big Ben era) while struggling against the Patriots (1-3). The big-squawking Ravens give them bulletin-board material while the Pats bore them to death with empty platitudes. Even historically, the Steelers are a perfect 8-0 against division opponents in the post-season since 1970.

Simply put, hatred brings out the best in the black and gold.

Goodell did the Steelers a huge favor in October by changing the tune in the Steelers’ locker room from shame to anger. The Roethlisberger conversation was one the Steelers couldn’t win. What was there to say? How could teammates defend Ben? They couldn’t. It was a no-win. But then in Week 5, just as Roethlisberger’s return was about to test the Steelers’ chemistry, Goodell flipped the script.

By billing the Steelers for six-figures in fines for helmet-to-helmet hits and making a scapegoat out of James Harrison, Goodell changed the entire conversation. Instead of the repetitive drudgery about Roethlisberger’s return to the team, the media shifted their crosshairs to another question: Are the Steelers a dirty team?

The commissioner’s hollow crusade for player safety (nevermind the push for an 18-game season) had a black-and-gold villain, and, ironically, it couldn’t have worked out any better for the Steelers. The controversy brought the locker room closer together than ever before. Immediately, players stuck up for one another. Even soft-spoken Troy Polamalu publicly challenged Goodell’s logic in defense of Harrison.

But Goodell, not yet satisfied with his motivational work, gave the Steelers one last push during Super Bowl week. By revealing to Sports Illustrated’s Peter King that he had spoken with "two dozen" NFL players after Roethlisberger’s suspension and "not a single player went to his defense," Goodell probably thought he threw Roethlisberger under the Madden Cruiser.

Instead, Goodileaks had the opposite effect. It galvanized an already pissed-off team. Locker room leader James Farrior called out Goodell’s vague disclosure immediately.

"That’s baloney," Farrior told reporters. "All of the guys in the locker room love Ben. No matter what people say, how people think we feel about Ben, we love the guy."

Many Steelers fans expressed frustration with Goodell’s hyper-hypocritical helmet-to-helmet holy war against Steelers. But they should actually be thanking him. At a time when the locker room could have easily been divided and distracted by the Roethlisbrouhaha, Goodell’s crucifixion pushed them closer than ever.

Once again, it’s "us against the world."

The Steelers, and their fans, wouldn’t have it any other way.

Thank you, Mr. Goodell, for your unkind words. To our ears, they practically sing.