Roger Goodell Has a Headache

Why the NFL’s $765 million concussion settlement is far from the end of the story. 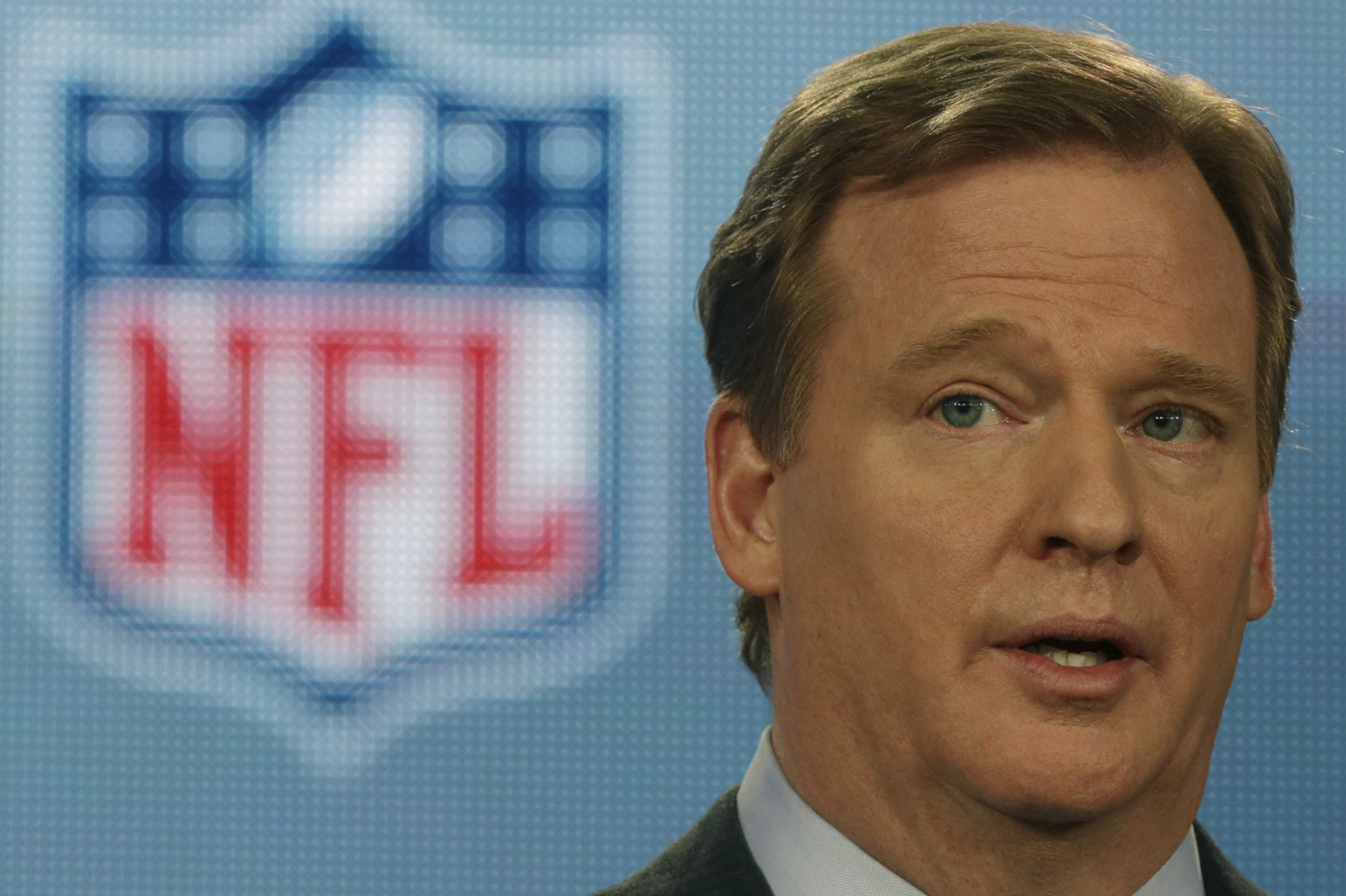 It’s the summer of 2018. You’re the starting running back for the Pittsburgh Steelers. A nurse is sticking a needle into your forearm. A radioactive chemical called FDDNP is coursing through your veins.

This is the easy part.

Up next: half an hour in the tube, lying still. You can’t even play with your phone.

As training camp kicked off in Latrobe, a knock on your dorm-room door interrupted a game of “Madden.” It was the doctors. You knew your number was coming up soon; it’s been two years since your last test.

Inside the tube, the gears of the Positron Emission Tomography machine whirr like an old fax machine, producing a 3-D image of your body on a computer across the room. As you stare into the sterile white abyss, you know your legacy is at the mercy of this machine. Your life, too.

The waiting is the worst part. It takes about 30 minutes for the physicians to examine the scans. It takes you only two seconds to realize your fate when you see the thermal scan of your own brain shown on the wall. Your frontal lobe is burning with red splotches.

After eight seasons in the NFL, the reaper has come for you.

The doctors talk about proteins and neuronal loss and neurofibrillary tangles, but the jargon goes right through you. Then you hear the only thing that matters.

“If you don’t walk away from the game right now, you run the risk of becoming the next Mike Webster.”

NFL Commissioner Roger Goodell may be in a race against science. At the owners’ meetings in April, Goodell confirmed that the league still wants to expand to an 18-game regular season. As the CEO of a $9.5 billion business and the man who promised to triple revenue by 2027, Goodell and the owners could well be thinking this is the last chance to squeeze guaranteed profit out of an extended regular season before science finally catches up with football.

In late August, the NFL agreed to a $765 million settlement with former players — more than 4,500 — who claimed the league was negligent in its handling of concussions. As part of that settlement (Businessweek had predicted the lawsuit would cost the NFL at least $5 billion), the league admitted no liability for the injuries.

To many, it signaled the depressing end of the NFL’s fiscal concussion crisis, if not its moral crisis. However, surprising developments in labs around the world could change football forever.

On the eve of the 2013 Super Bowl, researchers from UCLA published a breakthrough research study in The American Journal of Geriatric Psychiatry. By injecting a radioactive compound into the bloodstream of five retired NFL players, the UCLA researchers were able to identify the biomarkers of chronic traumatic encephalopathy (CTE) in a PET scan. The compound, called FDDNP, acts as a tracer by binding with the tau protein deposits associated with CTE. The tracer then accumulates in the brain in various densities, which show up in different colors on the PET scan (low-density deposits show up blue, while high-density deposits glow red).

The result: a real-time picture of the wear and tear on a player’s brain caused by repeated head trauma.

For the first time, living NFL retirees were shown medical slides covered in red in the same areas of the brain found to be riddled with CTE in deceased players. All five of the retired players in the study, aged 45 to 73, were found to have high signifiers of CTE. Their concussion histories ranged from as high as 20 to as low as two.

“I want to stress that the diagnosis of CTE, right now, still has to be confirmed after autopsy,” says Dr. Gary W. Small, the study’s lead author and a professor of psychiatry and biobehavioral sciences at UCLA. “But what this study showed is a pattern of tau deposition in the same areas of the brain that you see in CTE cases in autopsy.”

Plenty of researchers worldwide have been working on ways to diagnose CTE in living people, but the low cost of UCLA’s test makes it a potential game-changer. Even in the preclinical stage, the total cost is $6,000. The whole process takes less than two hours.

For $10 million — 0.1 percent of the NFL’s annual revenue — the league could test every player (many have independently contacted UCLA about volunteering for future studies, says Small). If the tests were underwritten by corporate and government partners, thousands if not millions of high-risk high school and college players also could be monitored.

The UCLA research has been criticized as too preliminary in some circles. But no matter which team discovers the best method, science is finally starting to unlock the riddle of degenerative brain disease.

In July, researchers at Germany’s Saarland University published a study in the journal Genome Biology that could lead to a blood test for Alzheimer’s disease, a close cousin of CTE. The new technique identified differences in microRNA (tiny fragments of genetic material floating in the blood) to diagnose Alzheimer’s. The test was 93 percent accurate in 202 human trials.

However the test is administered, the $9 billion question looms: How will the average NFL fan react if brain scans become as routine as knee scans?

“This research is still in its infancy, but there are big, tough questions coming that could change the game forever,” says Dr. Julian Bailes, co-director of the NorthShore Neurological Institute in Evanston, Ill., and one of the study’s lead researchers.

Those questions will be more complicated in Pittsburgh — a city where people still devote shrines to Jack Lambert’s broken smile and mummified fingers, but also a city where beloved lunch pail hero Mike Webster spent some of the final years of his life sleeping in the Greyhound station, a member of football’s walking dead.

All of us — fans, players, owners, scientists — say we’ve learned a lot about head trauma in the past decade.

But picture yourself in 2018, looking at scans of your brain glowing red. What happens then? Who decides? What price is the human brain — your brain — worth?

The answers will tell us a lot more about football, and ourselves, than a $765 million lawsuit.

This article appears in the October 2013 issue of Pittsburgh Magazine.
Categories: From the Magazine, Hot Reads