Rock Around the Clock

Remember the time Elvis came to the Civic Arena? We do. 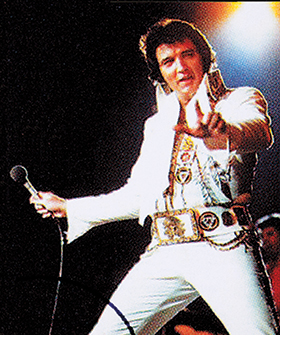 It was a frigid New Year’s Eve. Sixteen-thousand people had gathered at the Civic Arena for a 9:30 p.m. show. Nothing was rushed. After several opening acts and an intermission — around 11:25 — the crowd went crazy, women screamed and flashbulbs lit the stage. Elvis Presley was performing in Pittsburgh.

It was only his second visit here. His manager, Col. Tom Parker, didn’t believe that any Pittsburgh venue was big enough — until the arena was built. The King’s first local appearance, in June 1973, sold out so fast that a second show was added the following night.

Then, to end 1976, the 41-year-old came back (for just one show) — and wowed his fans. Critics from the local papers noticed that Elvis wasn’t the spry and sexy hip-shaker he once was, but the band was top-notch, he at least sounded good and the energy of the event was electrifying. Elvis performed for 90 minutes, stretching well into the New Year; he was singing “Funny How Time Slips Away” when midnight arrived, the house lights were turned on, and The King led the crowd in singing “Auld Lang Syne.”

Priscilla Parker from Dormont was there. “It was wonderful,” she remembers. “He looked great. Thin. A little tan. When you mention to Elvis fans from anywhere that you’re from Pittsburgh, they want to know if you were at that concert!”

It may have been one of his last reasonably healthy concerts. In 1977, Elvis started gaining weight quickly and passed away on Aug. 16, just seven-and-one-half months after he rang in the New Year at the Civic Arena.

But of course, The King is immortal in many ways — as represented in Andy Warhol’s gigantic 1963 work, “Elvis 11 Times.” It’s on display on the fifth floor of The Andy Warhol Museum.

This article appears in the January 2013 issue of Pittsburgh Magazine.
Categories: Rick Sebak