Award-winning Post-Gazette editorial cartoonist Rob Rogers, whose work is featured in a new retrospective book, talks about his career and shares a behind-the-scenes look at his job.

Rob Rogers doesn’t look angry, as I half-expect him to look. He’s not sweating or pointing his finger as Rush Limbaugh, another well-known commentator on politics and the news, is wont to do.

Rogers doesn’t look particularly funny, either, as one might expect him to look. He doesn’t have floppy hair or a perpetual grin like his friend Dave Barry, the syndicated humor columnist for the Miami Herald who wrote the very funny foreword to Rogers’ new book, No Cartoon Left Behind! (Carnegie Mellon University Press); the book’s a coffee-table-sized retrospective of his 26 years as the editorial cartoonist for The Pittsburgh Press and Pittsburgh Post-Gazette. 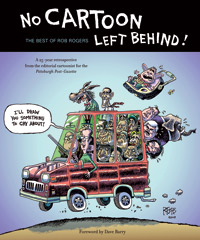 When Rogers, 51, appears at a coffee shop in Shadyside on a recent afternoon, he looks laid-back in a greenish-brown button-down shirt and jeans as he sips iced tea and flips silently through his sketchbook.

It’s those sketches, transformed into full-fledged cartoons, that have earned the native Philadelphian fame, a Pulitzer Prize nomination and other accolades, such as his 12 Golden Quill Awards, along with a mix of praise and derision from riled-up readers here and across the country (his work is syndicated in several major metropolitan dailies, including The Washington Post and The New York Times).

In his latest release, readers will find Rogers at his wittiest and most acid-tongued. For example, the Jan. 31, 2004, cartoon features former President George W. Bush riding a falling bomb, Dr. Strangelove-style, and this caption: The only WMD ever found.

Much like comedienne Joan Rivers in her new eponymous documentary, Joan Rivers: A Piece of Work, Rogers is careful not to take himself too seriously in this career retrospective.

In his book, he includes some whimsical touches (a graphic showing the progression of George W. Bush’s ears as drawn by him over the first four years of Bush’s presidential administration) in addition to some outtakes, which were the cartoons his editors at the P-G either didn’t find funny or deemed too hot for print.

Over the course of several hours and several glasses of iced tea, Rogers talked about his career as an editorial cartoonist, a job he landed at the age of 26—fresh from graduate school, where he studied fine arts at Carnegie Mellon University.

Here are the highlights:

Q: Did you know while studying painting at CMU that you wanted to become a cartoonist? What did your professors think?

A: I never told my professors I wanted to be a cartoonist. They would have looked down on that choice. I ran my first strip in The Pitt News. They even paid me. It was called “Rogers’ View.”

Q: Did your father approve, or did he want you to become a physician like him?

A: He vacillated between encouraging me to do what I wanted and being worried about me living the life of an artist. He tried to find out if I might be interested in medicine, and he arranged for me to work in a hospital for two summers and do rounds with him. I couldn’t do it. It wasn’t me. I had to go after my passion for drawing.

Q: How did you become a professional cartoonist? What was your big break?

A: The Pittsburgh Press hadn’t had a cartoonist for 25 years. The graphics editor saw my work, and in 1984, I was offered a job there right after grad school. I feel very lucky to have been employed all this time as a cartoonist, especially because it was touch-and-go for the first two months. I finally found my voice by the third month and got into the groove of meeting daily deadlines.

Q: What comes first in drawing an editorial cartoon: the image or the text?

A: I usually start with the text. The visuals are not quite as important as the text. It’s funny for me to say that when I have a master’s in fine arts in painting. I believe a bad drawing doesn’t ruin a good idea, but a bad idea ruins a good drawing. The most powerful cartoons have both a good idea and drawing, like my George Bush and Dr. Strangelove cartoon. Thank you, Stanley Kubrick, for that image!

Q: What do you think of obituary cartoons—the ones where some celebrity is always arriving at the pearly gates?

A: I hate them. I have said that I won’t do them unless the person meant something to me. The best cartoons are built on outrage. I try to push the envelope as far as I can go.

Q: Do you ever get frustrated or saddened by criticism you get from readers?

A: [Post-Gazette executive editor David] Shribman takes all the calls from readers wanting me to be fired, and he tells them why they’re not firing me. He’s always had my back. One day he said to me, “We only got 50 calls today for you to be fired. You’re not doing your job.”

This article appears in the November 2010 issue of Pittsburgh Magazine.
Categories: Arts & Entertainment