In honor of National Pierogi Day, the casino kitchen crew shows off its 123-pound masterpiece and feeds a crowd. 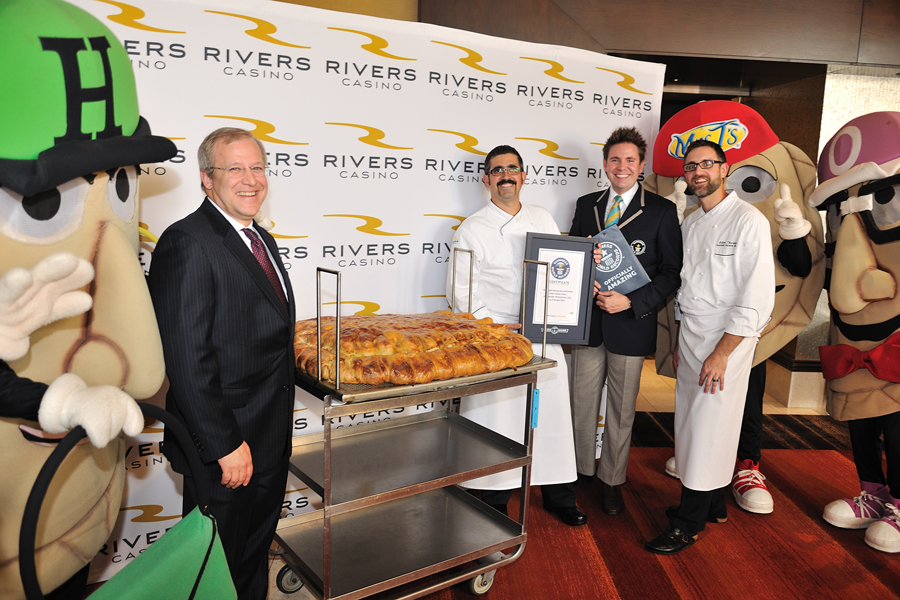 As anyone who's whipped up a batch knows, it takes time, patience and dedication to make pierogies. Fortunately the Rivers Casino culinary staff likes to see a project through — otherwise the World's Largest Pierogi wouldn't exist.

To mark National Pierogi Day (which happens to be today), the team had talked for more than a year about the possibility of breaking a Guinness World Record for the biggest stuffed pillow of dough. To do so, Executive Chef Richard Marmion, Assistant Executive Chef Adam Tharpe and company would have to create a pierogi weighing a minimum of 110 pounds.

They tried several dough recipes before finding the one they knew would work, requiring sour cream, oil, eggs, water and other traditional ingredients. Yesterday the team did necessary prep work on the dough and 60 pounds of potatoes and came in at 4:30 this morning to get to work. After boiling the monstrosity in 25 gallons of water for 60 minutes, it was time to bake; the staff placed the pierogi in the oven for an hour at 300 degrees before cranking up the heat to 425 for 15 minutes. Around 10 a.m., the resulting pierogi, which had a nicely browned exterior, was presented to a sizable crowd — which included the Mrs. T's pierogies.

In front of everyone, adjudicator Michael Empric announced that the chefs had made a 123-pound pierogi. An eating frenzy immediately commenced.

#Give: 'Keep the Light Shining' at Pittsburgh's mountaintop church

The 117-year-old St. Mary of the Mount is a familiar part of the Pittsburgh skyline, even if it's nowhere near downtown. The Catholic parish is perhaps the most recognizable Mount Washington structure from afar; crowds gathered downtown and on the North Side can easily spot it. Now, the parish is looking to raise some dough to expand and build a parish center that'll serve the church, the neighborhood and the local chapter of the Catholic Deaf Community (which also calls Saint Mary home). They're also hoping to use a portion of their $3 million goal to preserve the church itself. Feel like helping this apex cathedral? Click here to contact the parish.

Mary Shaw, a longtime professor at Carnegie Mellon University’s Alan J. Perlis University of Computer Science, will be one of the recipients of the nation’s highest honor in the field of technology — the National Medal of Technology, selected each year by the president. Shaw was one of eight recipients named for the award; awardees will be honored later this year at a ceremony at the White House. Shaw has been instrumental in software engineering research, particularly in software architecture as a crucial step in the engineering of complex systems. CMU President Subra Suresh recognizes her accomplishment, noting in a news release that, “Her hard work as a software engineer and educator has made CMU a leader in the field. This national recognition for her contributions to technology and society is richly deserved, and all of us at CMU join in congratulating her.”