Big changes are expected as the Allegheny Airport Authority draws up a new master plan for the 25-year-old midfield terminal. 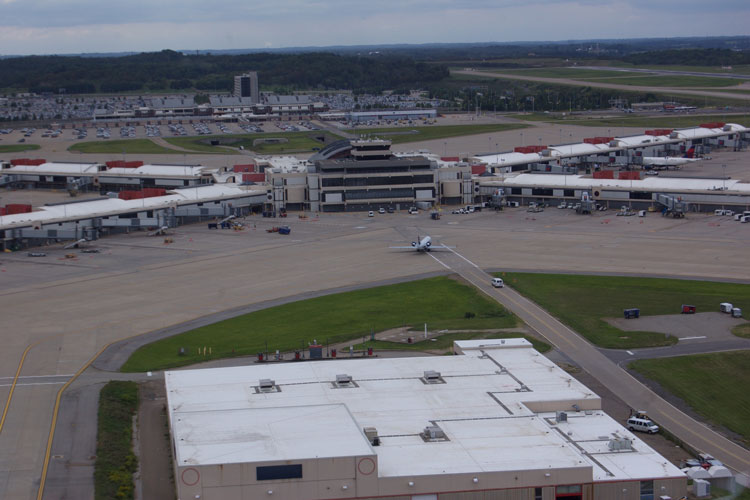 When it opened in 1992, the terminal at Pittsburgh International Airport was designed to handle as many as 35 million passengers a year. Then came Sept. 11, 2001, the eventual loss of the US Airways hub and a wave of airline mergers and downsizing. Roughly 8.3 million people a year use the terminal now, and more than a quarter of its 75 gates are never used.

The Allegheny Airport Authority has been working on a master plan to make the terminal more efficient. According to the Pittsburgh Post-Gazette, one option under consideration is the abandonment of the landside terminal and the tram that connects it to the airside terminal.

“There’s all kinds of options — doing nothing, going that way,” Rich Stanizzo, a board member for the Allegheny County Airport Authority tells the PG.

“As we’ve said before, we are in the midst of a master plan process to modernize and right-size our facilities to be more cost-efficient,” authority spokesman Bob Kerlik said in a statement. “We expect to complete that process in the coming months, which includes many different options for modernizing the facility with no local tax dollars. Nothing has been decided.”

If the landslide building is abandoned, ticketing, baggage and security would either have to move to the airside terminal or to a new building not yet constructed. The current landslide terminal could be converted into office space.

“I would certainly try to market it because there are certainly people who need office space and a connection to travel,” Tasso Katselas, the Pittsburgh-based architect who designed the midfield terminal, told the PG.

Another downsizing option would be to demolish some of the unused gates, an idea first floated by authority CEO Christina Cassotis last year.

Allegheny County Executive Rich Fitzgerald tells the PG the ultimate goal of the master plan is to increase the number of passengers by attracting more flights while keeping a lid on the fees charged to the airlines.