Revolt Against Your Netflix Queue

The best way to experience classic holiday films is at the theater with a jumbo popcorn next to complete strangers (and maybe a family member or two). 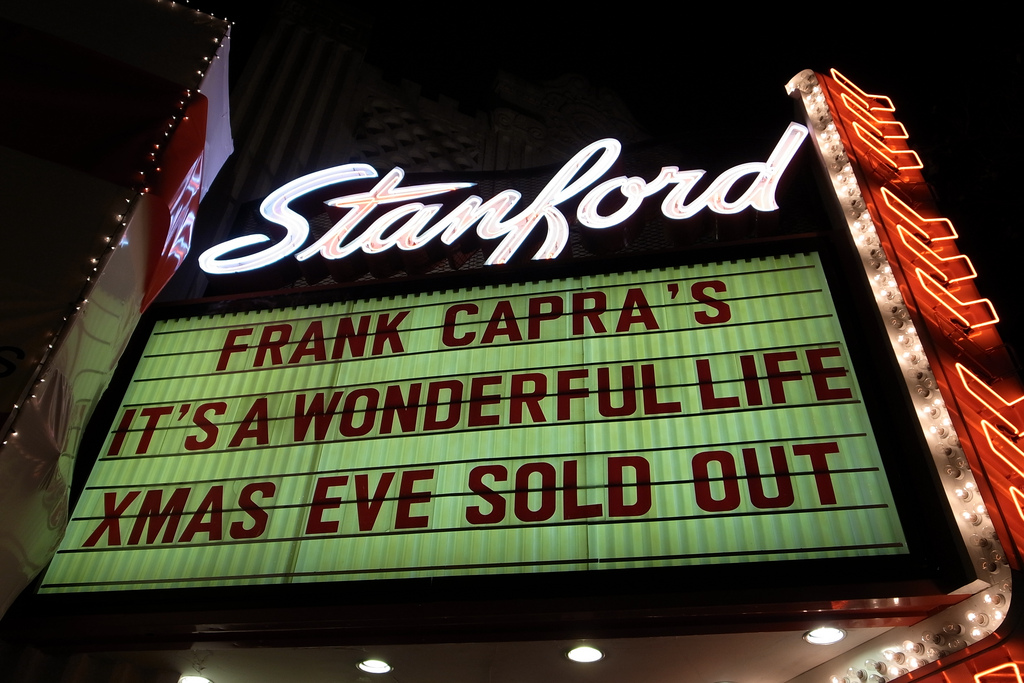 I’m looking at the “Holiday Favorites” section of Netflix’s Instant Streaming page, and I can’t help but notice: very few of these films are anyone’s favorites. Sure, they’ve got Miracle on 34th Street and White Christmas. But they also have Kung Fu Panda Holiday, which currently stands as the top-ranked film in the category.

No fewer than three lovable dogs and one lovable bunny save Christmas in the first 25 selections on the page. South Park, Fat Albert, He-Man, Black Adder, Madagascar, Shrek, How to Train Your Dragon and Casper are but a few of the multitudinous non-holiday properties weighing in on the season — as are Adam Sandler and Jeff Dunham, in their own specials. The clear message? People want to watch lots and lots of seasonally-appropriate fare.

Indeed, the world of streaming entertainment demonstrates that you can park the kids (and particularly sentimental adults) in front of the TV for more or less the whole month and find yourself free to shop (and/or perfect that Hot Toddy recipe) undisturbed. But with all that red and green programming to go through, what’s so special about it? Gone are the days when the family marked the calendar for the seasonal airing of Rudolph or Frosty — you can queue up the Grinch in May, if you’re so inclined.

So how to reclaim the overstuffed tradition of gathering around for a Christmas favorite? By turning it into a night out. Movie theaters are all too aware of our growing obsession with yuletide cinema, and are reviving winter favorites throughout the month.

The most attention-grabbing series is the lineup at AMC Waterfront, where they’ve prepared a sextet of classics spanning a half-century. The series is actually already underway, so apologies to fans of Will Ferrell’s Elf; you missed the boat. But there’s plenty more holiday cheer to be had, starting tonight with Love Actually, the endlessly lovable holiday rom-com from 2003 (try not to lose it when you realize that yes, that is Rick Grimes from "The Walking Dead"). Next week, lifetime Christmas champ It’s a Wonderful Life screens on Tuesday (12/11), while Bill Murray’s ’80s romp Scrooged plays on Thursday (12/13). My personal favorite, National Lampoon’s Christmas Vacation, is up 12/18; the series wraps up with baby boomer fairy tale A Christmas Story on 12/20.

All screenings start at 7:30, and tickets are a mere $5 — or, refine your new holiday tradition further by springing for the VIP section. Tickets are almost never discounted for AMC’s luxury seating, but they’re down to $10.50 each for these showings. And don’t forget, you can bring alcohol to those seats. (amctheatres.com)

Speaking of It’s a Wonderful Life, if decades of reruns on every television channel under the sun are any indication, it’s worth seeing more than once per season. So if you feel like doubling up on Jimmy Stewart, make sure you stop at Regent Square Theater between the 18th and 22nd, when screenings of the Frank Capra classic will be free of charge — provided that you drop off a nonperishable or canned good on the way in, to benefit the East End Cooperative Ministry’s food drive. (theaters.pittsburgharts.org)

And of course, perennially reliable repertory/indie house The Hollywood Theater, fresh off an appearance in The Perks of Being a Wallflower, is getting in on the action, with screenings of White Christmas, National Lampoon’s Christmas Vacation, and Elf. (thehollywooddormont.org)

Pick one, pick five, go every night, just get out of the house. Yes, the holiday season is the time to wrap oneself in the warmth of family and such — but no one ever said you had to do it in your living room.