The South Side stalwart punches above its weight thanks to good beer and gigantic sandwiches. 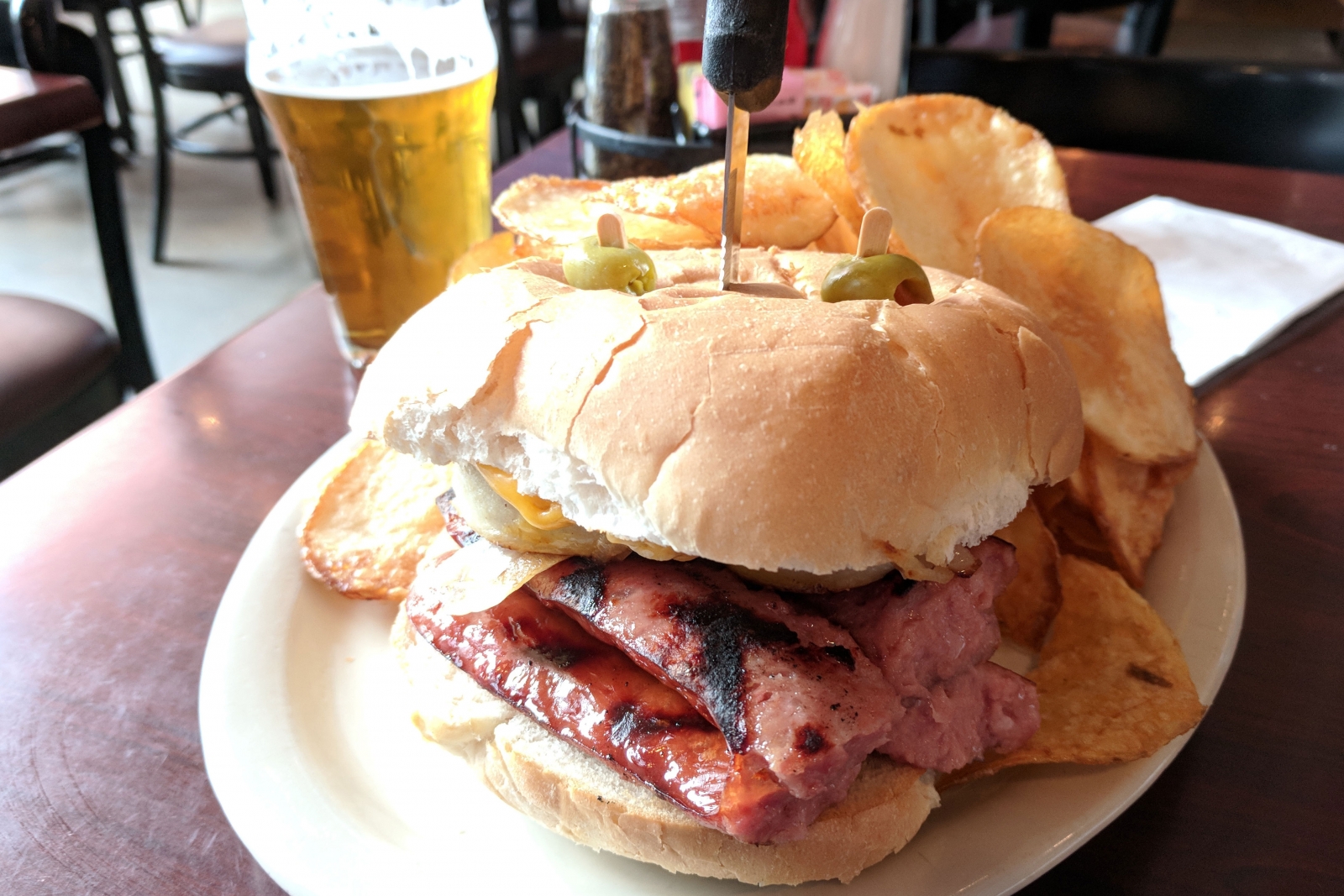 My memories of Fat Head’s, the Carson Street mainstay known for hearty burgers and a bulbous logo with a cheshire-cat grin, are primarily from childhood.

No, I wasn’t bar-hopping as a preteen. Although that would really up my credibility. “I’ve been going to Dee’s Cafe since I was wearin’ Ninja Turtle suspenders!” Anyway.

Grown-up family members were quite fond of Fat Head’s in the mid-’90s, and it emerged as a destination for group outings. They liked the draft selections and the giant piles of food; I was mostly in it for the Jones Soda, the proto-hipster brand of cane-sugar pop that enjoyed a wave of popularity through the mid-2000s.

Since then, though, I’ve found little cause to return, even as the pub has established satellite locations, begun brewing its own beer and marked a quarter-century of service on the South Side (a fairly remarkable run on ever-changing Carson Street).

Last week, though, my girlfriend suggested we pop in for a Bumble Berry, Fat Head’s popular honey/blueberry ale. I ordered their Dortmunder Lager. My beer was good. Her beer, she said, was delicious, and garnished with surprisingly fresh berries.

That made it official: It was time to reevaluate Fat Head’s, on the merits of more than brightly-colored fad soda.

I returned for lunch, finding a menu with an embarrassment of sandwiches. Stuff between bread is distributed over a full three sections of Fat Head’s menu: sandwiches, burgers, and “Headwiches,” which are like sandwiches, but, y’know, big. I ended up ordering the Southside Slopes, which the menu claims was ranked among the nation’s best sandwiches by lad mag Maxim. (A little Googling reveals this to be a bit of an exaggeration; in 2004, the magazine included it on a list of the nation’s best “meat hog” sandwiches, a collection of artery-choking megadishes. More recent domestic sandwich rankings by Maxim have not included any mention of Fat Head’s.)

The sandwich was definitely gigantic. And it was satisfying enough — a kielbasa hoagie on a bun, basically, topped off with a couple of nicely done pierogies. It wasn’t anything to write home about, but paired with a signature beer — the Starlight, a helles lager, this time — it was a filling and pleasant meal. The house-made chips it was served with were quite good — despite a bizarrely prominent placard on the menu declaring that sandwiches would be served with chips, burgers would be served with fries and no substitutions on potato products would be permitted.

Hell of a hill to die on, there.

The remarkable thing about Fat Head’s is how inviting it is. Even on a stretch of pavement known for its eagerness to please, this is a place with attentive-yet-unobtrusive service, pleasant atmosphere and genuine positivity pervading its staff and clientele. A soundtrack of standards — “Mother and Child Reunion,” “Folsom Prison Blues,” “Heroes” — perfectly walked the tightrope between toe-tapping and incidental. For all the Spotify playlists that attempt to do so, throwback music collections are tough to get right. Fat Head’s nails it.

They nail most things, oddly centralized gift shop notwithstanding. It’s a well-run, welcoming neighborhood restaurant with mountains of food, and they make perfectly respectable beer. You’d never mistake Fat Head’s for one of the best bars or restaurants in town; you can throw a frisbee from the front door and hit a better bar.

But, for trips exactly like those that brought me there as a child, it’s just right — a family from the suburbs comes Downtown looking for big meals and a beer or two in a laid-back restaurant. Downtown without the pretension, South Side without the chaos. This is a fine restaurant.

I don’t think they serve Jones Soda anymore, though.