Brad Pitt stars in the adaptation of the beloved novel that turned the stale zombie genre on its head. 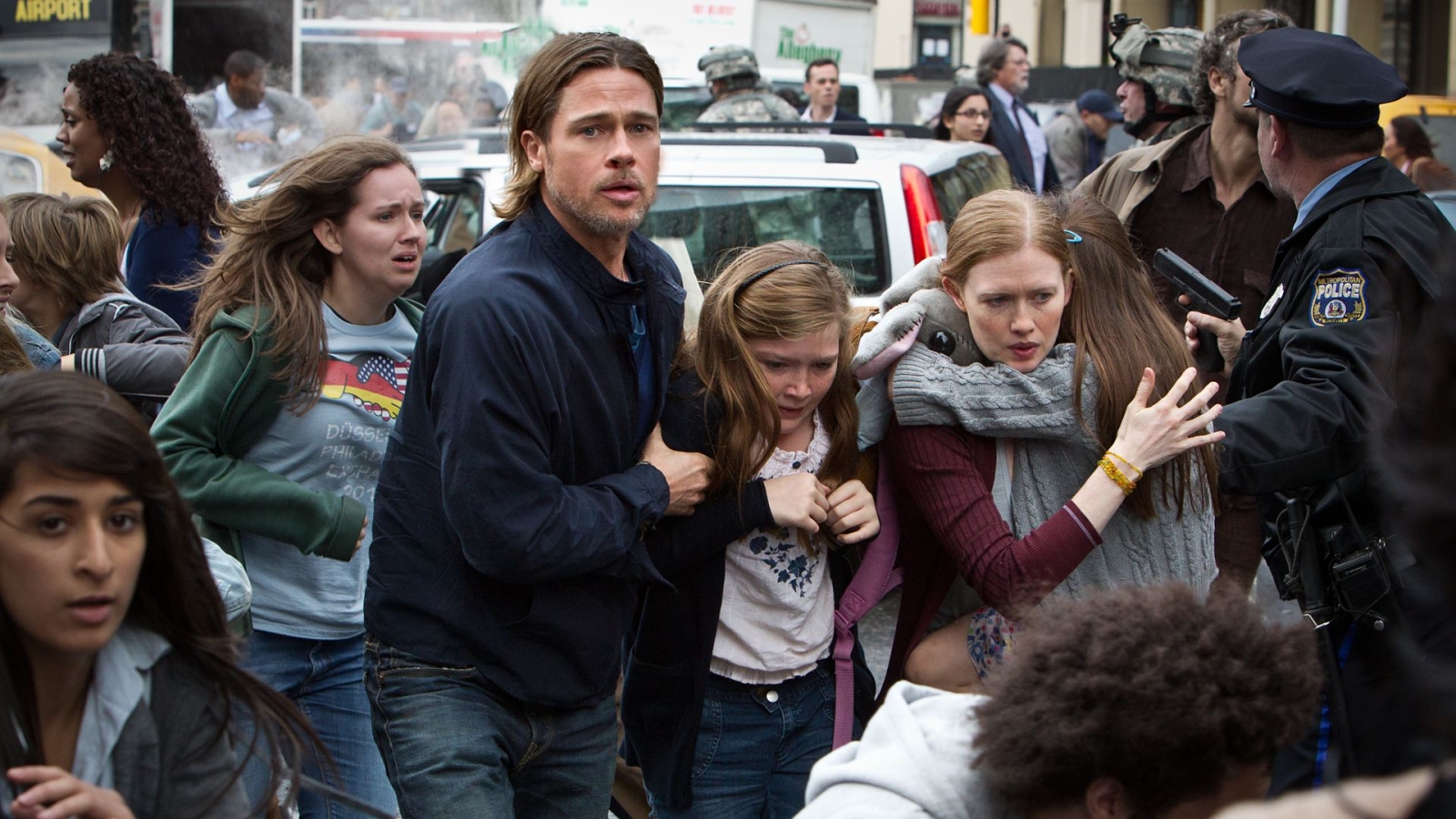 In the 45 years since George Romero brought the world into a tiny Evans City farmhouse for Night of the Living Dead, the scope of zombie flicks has remained intimate.

In that original film, we knew that the plague was widespread, but focused on a few survivors trying to keep the zombie horde outdoors. Dawn of the Dead relocated to Monroeville Mall, but still followed a small group. Even 28 Days Later, which created memorable scenes of a desolate London, concerned itself with a limited number of uninfected protagonists.

World War Z has a leading man, too — Gerry Lane, a former U.N. investigator played by Brad Pitt. The traditional narrative would have Lane blockade his family — wife Karen (Mireille Enos) and daughters Rachel (Abigail Hargrove) and Constance (Sterling Jerins) — in some remote spot, fending off hungry intruders. Not here; in World War Z, Lane jumps around the globe in search of clues that might lead to a cure.

See, most of the world wrote off the zombie-producing infection as an unimportant nuisance. We get the impression that the global reaction to the gathering undead inspired shrugs, much like the reaction to a wave of news reports about a swine flu outbreak. Before anyone took the trouble seriously, the infection had spread to nearly every major city. Panic, death, evacuation, growling, biting — you know, a zombie pandemic.

So with little government to speak of, Lane has to get up close and personal to gather information. He circumnavigates the planet, picking up a few allies along the way. At no time are we more than a few minutes removed from a zombie fight, no matter how secure Lane’s location seems to be.

The novel World War Z, composed as an oral history by Max Brooks (son of comedy legend Mel), was notable for its detail; the author conducted extensive research on topics ranging from military deployment to the global economy in order to approximate what would likely happen in the event of such calamity. While the big-screen version of the tale certainly lacks the thoroughness of a written work, you can feel the breadth of Brooks’ knowledge in how un-pulpy the material feels. There are no shotgun-toting heroes, no miracle fixes and no tongue-in-cheek nods in World War Z. Mostly, it’s panicked governments and barricades.

What results, then, is an unusual hybrid of a movie, with elements of horror mingling with mystery, thriller and that odd subgenre of epidemic drama (think Contagion). It’s hard to make such a pastiche work. Fortunately, director Marc Forster (Monster’s Ball, Quantum of Solace) is a deft storyteller unafraid to dive into the murkiness that World War Z offers.

Among his wise moves is a focus on some of the secondary characters that Lane runs into. Pitt and Enos both do well, but a story this big inevitably belongs to the masses. The film’s most memorable character is Segen (Daniella Kertesz), a bold Israeli soldier who prevents Lane from dying on a number of occasions.

Before World War Z, the zombie genre had devolved into parody (some of it quite good) and repetition (some of it acceptable.) By changing the normal structure of the story, though, Forster and Brooks have pushed the tropes into new territory, with the mass appeal of “The Walking Dead” and the blockbuster palatability of the better Marvel flicks. It might be the best movie of the summer, and it’s awfully close to being the best zombie movie ever.

Yes, even in Pittsburgh, we can say it: despite the absence of the Romero name, this flick is awesome. We’ll always have the Evans City Cemetery and the Monroeville Mall, but that doesn’t mean we can’t love this global outbreak, too. The zombie capital of the world can endorse World War Z with pride.

More film reviews from Sean Collier:
The Bling Ring
Much Ado About Nothing