Vince Vaughn and Owen Wilson reunite to play aspiring Googlers, and it's 2005 all over again — in the worst way possible. 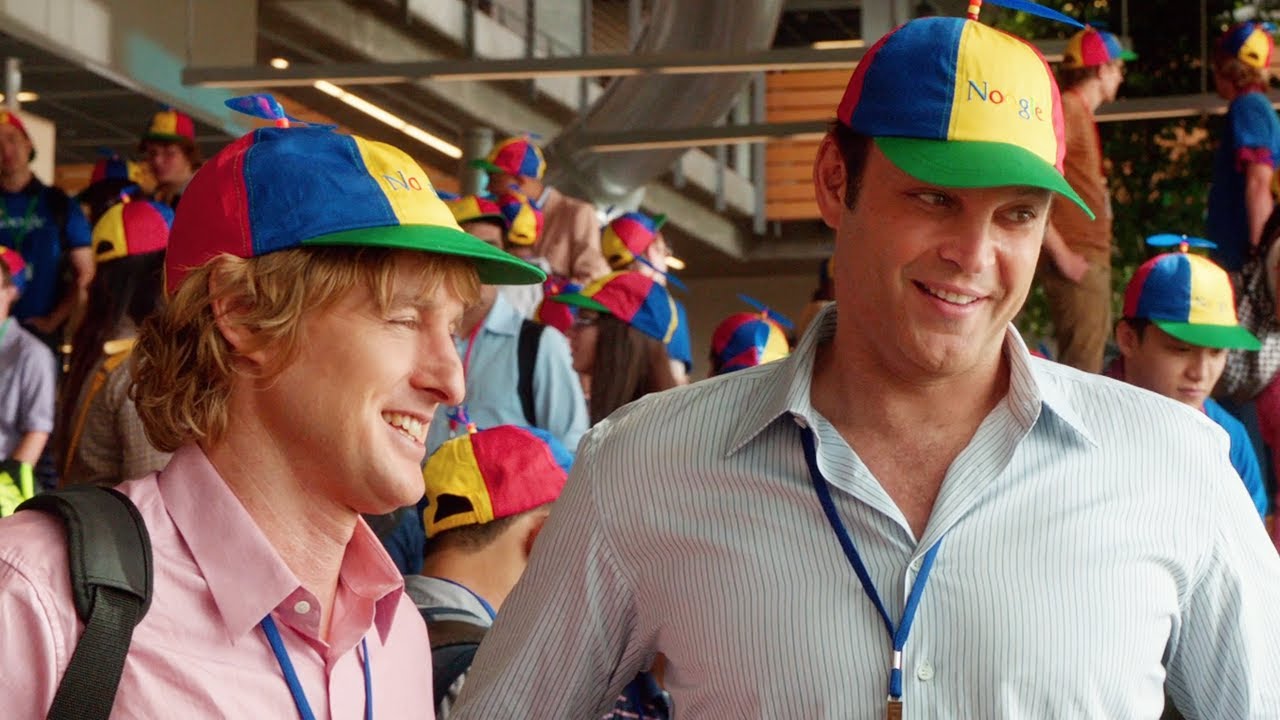 I know that the corporate culture at Google, the world's undisputed champion among coveted workplaces, is awesome. I've been there. It was great.

I'm just not convinced that Google Offices: The Movie, more commonly referred to as The Internship, is a sound premise for a film. It's more like a bad pitch meeting come to life. ("Google Crashers! It's brilliant!")

Vince Vaughn and Owen Wilson, finally reunited after the 2005 mega-hit Wedding Crashers, are Billy and Nick, aging manchild salesmen looking for work. Billy is convinced that they can use their slimy charm to bluff their way into gigs at Google. A set of patently unbelievable circumstances gets them in the door, setting the stage for an even more unbelievable premise: the tech giant is holding a summer-long competition between teams of interns, and the victors will be given full-time jobs. Apparently, the tech giant hires the same way “Survivor” picks a winner.

What follows is a long series of uninspired scenes wherein Billy and Nick learn the expected lessons about working together, overcoming adversity and believing in themselves. Other than the boys' interview, where Wilson and Vaughn are allowed to improvise freely, and a recurring bit that has Vaughn compare circumstances to the plot of Flashdance (itself an overused trope about a movie that came out 30 years ago and a hallmark of lazy comedies), none of it is particularly funny. Contrary to the belief of comic actors like Vaughn and Will Ferrell — who appears in a small role — comedy is not simply based on funny dudes talking. Sometimes, you actually need to come up with funny situations, and there are none to be found here.

Unfortunately, what appears instead is stereotyping and a fair dose of cruelty. An overweight intern is repeatedly mocked for laughs. A young Asian is portrayed as the unstable, maldeveloped output of a loveless tiger mother. The worst treatment, unsurprisingly, is reserved for women. Only two have more than a moment of screentime. One (Rose Byrne) is a distant, work-obsessed Googler who has never been in a relationship, despite being charming and gorgeous. Owen Wilson sleeps with her after three conversations and a dinner.

The other (Tiya Sircar), a brilliant young Indian-American programmer, is given exactly one defining characteristic: she's a virgin who acts like she's sex-obsessed. In her first scene of any substance, she invites Billy and Nick for bondage play. That's the vision of women that The Internship offers: even if they're brilliant, successful and beautiful, they're really just here to sleep with the men. Quickly.

We shouldn't be surprised; Wedding Crashers was shockingly homophobic, portraying the movie's only gay character as a brooding, obsessive outcast. This crew — led by Vaughn, who is given credit for the story, such as it is, as well as a producing credit — seems to think that a wink and charm can justify repeated and careless sexism, homophobia and racial insensitivity.

In a (much) better movie, arguments could be made about intention, tone and plot when it comes to offenses like these. But in a script as brain-dead as this — hastily written by Vaughn and Jared Stern — one can only assume that someone actually thinks borderline bigotry of this variety is funny. The shocking thing is that forward-thinking Google, who clearly worked closely with the filmmakers (a laundry list of Google products and services are highlighted, and several scenes amount to glorified Google sales pitches) would go along with the project.

Maybe they weren't paying attention. No one else was.