An affirming, touching and beautiful documentary from two Pittsburgh co-directors. 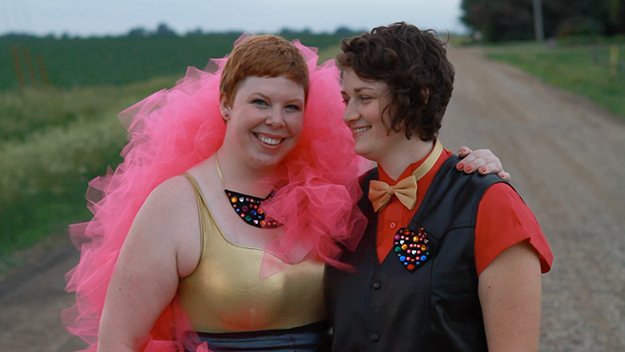 Photos courtesy of Wait What Productions

Rachel and Amanda are an enthusiastic, loving couple. They share a Philadelphia home and a black chihuahua. It’s time to get married, so the two begin eagerly making plans.

For an over-the-top, spandex-clad ceremony officiated by a campy female rapper and conducted in an Ames, Iowa storage facility.

So begins Married in Spandex, a documentary about Rachel and Amanda’s trip to the altar — or, rather, the warehouse. Co-directed by Pittsburgh natives Devin Gallagher and Allison Kole, the film makes its Pittsburgh premiere Friday night at Dormont’s Hollywood Theater.

The impetus for the couple’s Iowan odyssey is twofold. Obviously, gay marriage is still illegal in Pennsylvania, so Rachel and Amanda have no choice but to travel for a ceremony. But the inciting incident in this journey is the discovery that the bizarre female comedy rapper Leslie Hall offers same-sex marriage services in her native Iowa. After a hasty proposal (through a GChat conversation, yet,) Hall is contacted and arrangements are made.

Married in Spandex toes a difficult line well. To delve directly into the more obvious obstacles and issues facing the couple — family acceptance, legal wrangling, societal pressure — would be an on-screen cliche, treated a thousand times before. So while all those topics are presented, Gallagher and Kole do so plainly, without dwelling on the obvious. More complex issues, like the gay community’s divide on the institution of marriage as a whole, are given more time.

But any commentary or big-picture social implications are secondary, here, in favor of a simple love story. In a way, Married in Spandex feels like the wedding video elevated to an artform; nuptials as unique and remarkable as Rachel and Amanda’s deserve a treatment like this, and Gallagher and Kole are thrilled to deliver. Once the trimmings and trappings are cast aside, we’re left with a touching tale of romance and dedication.

Fittingly, though, no simple screening can contain the film; tomorrow night’s premiere is more event than night at the movies. Singer-songwriters Eve Goodman and Heather Kropf will perform a set beginning at 7:20 p.m.; after the screening, the directors will be joined by representatives from Equality PA to discuss the film, the happy couple and the fight for marriage equality here in the Commonwealth. And you’ll have the chance to score a wedding gift of your own, thanks to raffles from the likes of Wigle Whiskey, Commonwealth Press, Stage AE, Mad Mex and more.

No matter who you are, you’ll find Married in Spandex affirming, touching and beautiful. What more can any couple ask for in their wedding? Well, besides a gold-and-pink spandex wedding gown, of course.