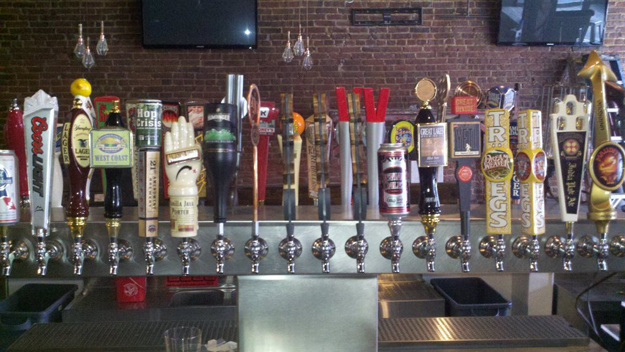 I have to admit that I have a long standing love-hate relationship with Lawrenceville. Pittsburgh’s hippest ‘hood has obvious and diverse appeal, and there’s always a reason to be on Butler Street or surrounding environs. I also have to admit that it’s great to have a nightlife destination that’s neither as rowdy as South Side nor as spread out as the Penn corridor. Still, I’ve always found that there are more overrated bars in Lawrenceville than any other neighborhood, and a constantly off-putting level of hipster posturing.

I’m thrilled to report, then, on the opening of an unabashedly awesome joint right in the heart of Larryville. In the shadow of Arsenal Lanes sits the just-opened Industry Public House, a great big open space housing a killer bar and restaurant. I dashed over at the first inkling of buzz for the new joint, and unlike just about every place I’ve ever visited within six blocks, I was immediately making plans to come back.

The trend around here is to basically leave a building untouched, and build a bar around its quirks and former uses; while that serves in many places, actual renovation is often a big help in getting a joint to establish its identity. Industry has a fresh face inside and out, with the interior feeling roomier than it is; nearly every foot of the floor plan is either seating or bar, but it still feels like there’s room to stretch out. An open window into the kitchen helps, too.

Beer and cocktails are the dual headliners here. There are forty brews on tap, with a focus on American micros; there are two house brews made for Industry by the experts up at Full Pint Brewing. I had the Copper Ale, mild and immensely drinkable; the other in-house selection was an IPA, and given Full Pint’s skill with those, I’m sure it doesn’t disappoint. An additional 50+ bottled choices are available, at perfectly reasonable prices.

If you’re feeling cocktails, experiment with anything containing the house speciality, whiskey. I’ve heard amazing things about their efforts with smoke. They’ll make whiskey cocktails where you can actually pick your own flavor of smoke. Given that mine was a mid-day visit, I shied away from the hard stuff, but one of these concoctions is at the top of my list on my return.

The menu seems to sit comfortably in that happy-hour-or-late-night groove, with lots of stuff that would serve perfectly as an app or a late-night snack; bar grub, burgers and sandwiches reign supreme, although there are a few entrees on hand (and even a kids menu.) I had the Outsourced Burgher (everything plays on the industry/factory theme,) featuring a slew of Tex-Mex ingredients and a metric ton of flavor. Order whatever you get with the pot-roast fries, drenched in gravy and bits of slow-cooked beef. Unbelievable.

The factory-floor decor is an obvious choice for Pittsburgh, but rarely executed as well as it is here; I was particularly impressed with the soundtrack. The temptation at a bar called Industry would be to go with, well, Industrial; fortunately, they kept the beats from that hard-hitting genre but picked more pop-friendly, upbeat dance tunes with a serious pulse. The energy is enough that you would feel fine hanging out in here on a Friday night, but never get annoyed at dropping in for a weekday lunch.

I’m raving a bit, here, but I’ll make no apologies; Industry is instantly one of my favorite Butler Street bars. They’re just in their first week, so time will tell if they can convince the too-cool-for-school neighborhood kids to come in; whether or not the place gets a hipster stamp of approval, though, its worth the trip from anywhere in town. Go now, and tell your friends about it before they tell you. Isn’t that the Lawrenceville way?