Flashdance's national tour premiered in Pittsburgh this week, and PittGirl was on the scene, squeee-ing from the rafters. 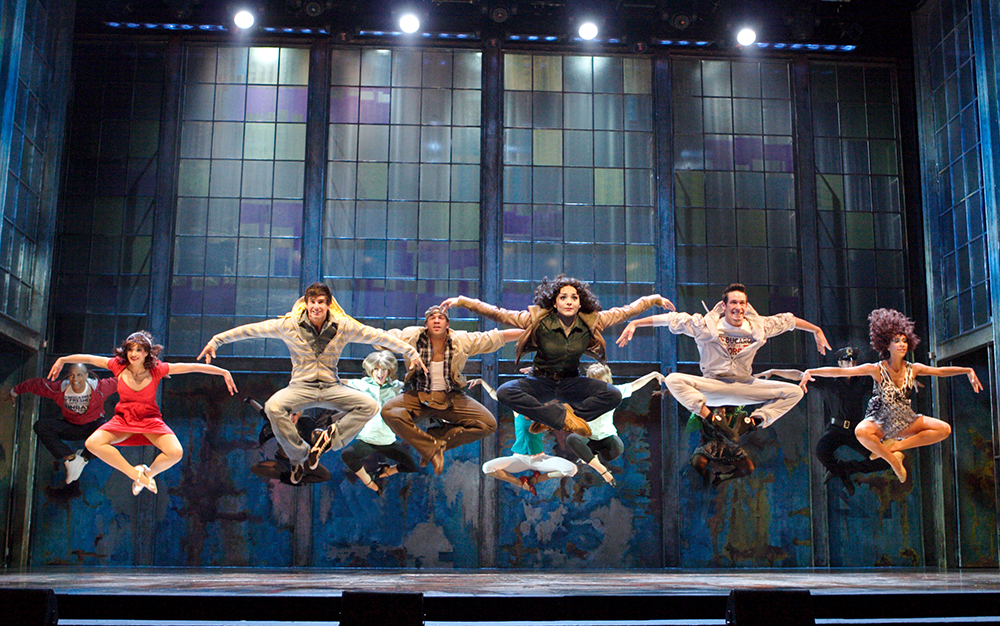 Let’s call this review Flashdance from Afar, because that’s where I was. Afar. Not nosebleed, per se, but the lady in the row in front of me was using binoculars. You might think I’m joking, but I’m as serious as Parkway rush hour traffic.

That I was seated there is probably indicative of both my status as a blogger and the fact that this show was packed. It’s completely understandable that non-paying new media can’t be given seats that would easily sell for ALL OF THE DOLLARS.

The fact that I just used all caps should tell you right away that I’m not your average musical theater reviewer. Just wait until I start squeee-ing.

Anyway, there was nary an empty seat that I could find. And justifiably so, because Flashdance is having its national tour premiered this week in the city that hosted the filming of the original movie — Pittsburgh.

The show runs through Sunday at Heinz Hall.

So what’s the deal this show? Let’s do a list. Lists are fun and easy to read.

1. No princesses here
Emily Padgett is perfectly cast as Alex. Her body is somehow almost identical to Jennifer Beals’ in the movie. She moves the way you expect Alex to move. You know how when you see a broadway show and every single actor and actress looks at all times like they have a stick up their butt? Their shoulders high, their spines straight, their guts in, their necks craned, their heels together, their gestures so over the top you want to shout out, “First word! Rhymes with …!–” That doesn’t happen in Flashdance. Alex sits with her knees open wider than a lady should. She stands casually. She moves loosely. Underneath her obvious feminine sexuality lies a very, very slight hint of masculinity — as it should because she’s A STEELWORKER. There is nothing stiff or fake about her. She’d be a terrible Disney princess. She might be a good actress with perfect emoting (I couldn’t see her face. Next time … binoculars!), and she’s a good singer, but tangible passion and joy ooze out of her when she dances. And, boy, can she can dance.

2. Nick Bing?
Nick Hurley, played by Pittsburgh native Matthew Hydzik, is Chandler Bing. No, really. From afar, he moves and dresses just like Chandler Bing. I half-expected him to say, “Could you BE any more ungrateful?” I warmed up to his character more and more as the show went on, so that by the end, I was rooting hard for him.

3. Leave home without them
DON’T TAKE YOUR KIDS. Seriously. This is a show about strippers; therefore it includes quite a bit of pole dancing, butt grabbing, dollar shoving, partial butt baring, and even a few spots where crotches are deposited into the face of dollar bill-wavers. Don’t go in there acting like your kids are about to see Flashdance by Disney. In fact, just don’t go in there with your young kids at all, lest you be ready to clutch your pearls.

4. Scene Stealer
Pittsburgh, as it seems to do in every movie filmed in it, plays a supporting role, visually. The stunning projected backdrop photos of yellow Pittsburgh bridges against clear blue skies and indigo waters really popped. Another Pittsburgh touch: In the lunchroom scene, it appeared that Alex was wearing a vintage Steelers t-shirt.

5. Music!
Is there a “Defying Gravity” in Flashdance? A song that transcends the show? I don’t know. It remains to be seen. If I had to guess, I’d say “Leap,” sung by Alex, is probably the closest thing. The music selections throughout are varied, with a nice blend of familiar and new. I’d prefer more catchy hooks on the new material, but I have terrible taste in music, as you know. That said, “Manhunt” is perfectly produced, as is “I Love Rock n’ Roll.” The only thing I hated was that they left my second favorite song from Flashdance out of the show: “He’s a Dream.” Right now, ask me if I care/look, it's coming closer, oh I'll swearrrrrr.

6. “I know that kick!”
If you’ve ever seen the Flashdance movie, even just once, you’ll find yourself having a faint case of deja vu with the choreography at times. During “Manhunt,” particularly, and “She’s a Maniac,” a sense of familiarity you can’t quite put your finger on will wash over you as the choreography pays tribute to the film. It might not be a carbon copy, but it’s definitely an intentional imitation that works to warm your heart toward the show. My only complaint with the choreography was the inexplicable inclusion of a 20-second burst of hip-hop, complete with backup dancers, into Alex’s final dance to “What a Feeling” in front of the panel of judges. It just … didn’t work. Not for me at least. It seemed unnecessary because Alex could easily have carried that entire scene all on her own purely with the power of her passion for her dance. Instead, there was hip-hop and I wasn’t happy and get off my lawn.

7.  Vic!
There was one instance when applause came at an unexpected time … not after a particularly funny joke or a stunning dance number. The audience chose to break into spontaneous mid-song applause when Pittsburgh's favorite dancing traffic cop, “Vic Cianca,” made a cameo. SQUEEEEE!

Here’s his part in the movie, as a reminder:

That his legacy was included in the show and that the audience recognized it, appreciated it, and actually applauded it is proof enough that he’s a permanent part of Pittsburgh’s heart.

But don’t get me started on the few hip-hop moves they made Vic do during his second appearance. Just … no.

8. Chills
There were moments of the show that gave me actual chills — shivers running up my body in appreciation. When Vic appeared. “Steeltown Sky.” Anytime a bridge showed up. When Alex danced the non-hip hop parts of her final dance. When Nick sang “Enough.” And most of all, the water scene. You know what I’m talking about. It was perfectly, perfectly done.

9.  One more spine-tingling chill?
Dear showrunners … listen to me. During “Leap,” near the end of the song, when Alex gets to the long sustained note and the big screen that had been projected with images goes blank just as she hits the glory note? Rather than just general city scenes, that lead-up needs to be video of the view when rushing through the Fort Pitt Tunnel, and then just as she hits the note, don’t go blank, but rather … BAM! You shoot out of the tunnel and show the city. Instant chills.

I know I’m just a squeee-ing blogger, but trust me.

Do you need that in all caps?

This article appears in the January 2013 issue of PittGirl.
Categories: PittGirl