Cate Blanchett shines in Woody Allen’s latest as one of Hollywood’s rarest birds — a fully-formed human. 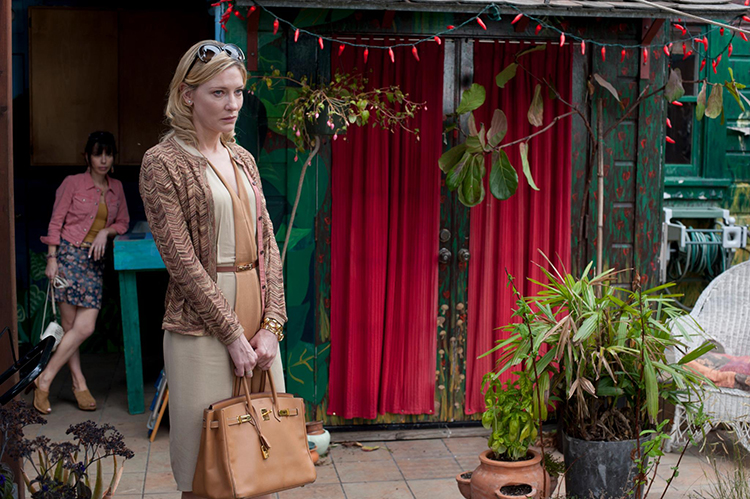 There’s something refreshing about a film that’s fully twist-free. In Blue Jasmine, Woody Allen doesn’t throw much in front of his characters — all performed beautifully, as has become customary with Allen’s work — save maybe a coincidental run-in here and there. Here, the director is more of a clockmaker, creating a set of circumstances and allowing them to unfold. It’s slow, but certainly pleasant.

Jasmine (Cate Blanchett), who has adopted that name after declaring Jeanette too unremarkable, is moving in with her theatrically working-class sister Ginger (Sally Hawkins). Her husband Hal (Alec Baldwin, seen in extensive flashbacks) was arrested after a string of Madoff-esque crimes; after he hung himself in prison, the feds took the vast majority of Jasmine’s stuff, leaving her with some lines of credit, luggage and little else.

That’s pretty much the story: what initially seems like a fish-out-of-water comedy of manners between the sisters quickly gives way to a more earthbound tale, as the crash has left Jasmine more or less incapable of normal function. Ginger, meanwhile, is attempting to press on with two children, well-meaning young boyfriend Chili (Bobby Cannavale) and a great deal of denial; she and her ex-husband Augie (Andrew Dice Clay) were among those ruined by Hal’s crimes, leading to the end of their marriage and continued minimum-wage employment.

Ginger kindly compartmentalizes that history from Jasmine’s current plight, despite everyone in sight pointing out that Jasmine was complicit at best. This may have more than a bit to do with Jasmine’s deepest secret, which Ginger is too humble to mention: despite her obsession with all things upper-crust, Jasmine is inexplicably and reluctantly jealous of Ginger. (Note that Jeanette changed her name to make it as fragrant as her sister’s.)

We progressively pick up on the details of the downfall, by way of explaining Jasmine’s inability to cope. Both timelines make ample use of Blue Jasmine’s greatest strength, the performance given by Blanchett. The script requires many different notes out of the character — she is losing her mind, after all — but Blanchett gives her an odd sort of frantic restraint, as indignities and failures roll in, wave after wave.

A film this easygoing doesn’t have any particular message to relay. If it’s anything more, it’s a reflection on the chaotic power of lies — as well as the frequent scarcity of truth. It’s not — as some have suggested — an exercise in rich-made-poor schadenfreude. While part of the intrigue is wrapped around the question of if and when Jasmine will receive her comeuppance, Allen finds notes of sympathy and humanity in the character. He stops short of a big reveal that absolves her, instead opting the more realistic route: presenting her as a fully-formed human, robbing us of our ability to judge her coldly.

In spite of her mistakes, her callous nature and her disdain for the real world, it’s hard not to flirt with pity when regarding Jasmine at the end of the film. We see Ginger and Chili in humble bliss as Jasmine unfurls; it’s an indictment of her lifestyle, if not her character.

So when you walk out of Blue Jasmine, you’ll want to sit down for a drink — but nothing upper-crust. Nothing fancy, nothing refined. My advice: see the flick at Squirrel Hill’s Manor Theater, always one of the best houses for a film like this. Walk up Murray, head around the corner and commandeer a booth at the Squirrel Cage. As the film demonstrates, it’s easier to enjoy yourself at a joint like the Cage than it is at the top of the world.