Review: A Kid-Free Experience at McDain's

McDain's made national headlines for banning kids under six, but is the food any good? 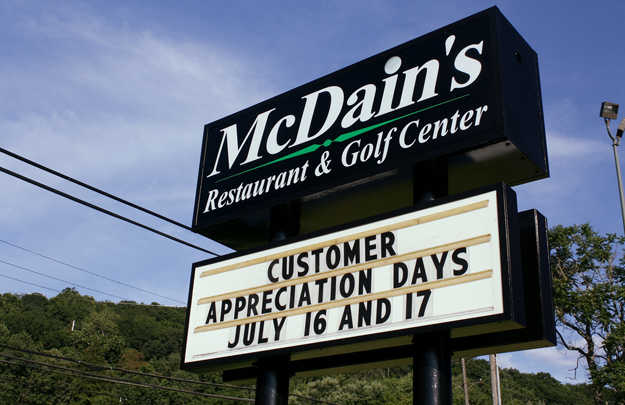 If the Family Feud category were “Things We Expected Would Get Pittsburgh National Media Attention This Summer,” the top three answers on the board would likely be The Dark Knight Rises, Steelers saying/doing moronic things, and probably the Marcellus Shale.

Probably not high on anyone’s list: McDain’s Bar and Restaurant in Monroeville.

But that was before owner Mike Vuick decided that “someone in our society had to dig their heels in,” as he grandiosely put it to the Wall Street Journal. And so Vuick, heels firmly dug, declared that children under the age of six were no longer welcome in his establishment.

Media coverage of his declaration spread quickly, spiraling out of control to the point where reporters as far afield as New Zealand and Australia were calling the small restaurant—mainly a driving range and golf instruction center—for comments. Many sources, the WSJ included, have found the obligatory quote from an outraged former patron; according to Vuick and several online polls, however, most customers support his decision.

Is this a fair policy for a restaurant to enact? Don’t business owners have the right to refuse service to whomever they choose, regardless of age? Isn’t there something to be said for establishments that cater exclusively to adults?

But more importantly, how are the wings?

Whenever these little issues crop up at a bar or restaurant, it seems that everyone is quick to comment – but few have actually been to the establishment, and fewer still bother to comment on the place objectively. I’m reminded of the furor that arose when a Kennedy Township bar offered a discount for every Pirates loss, and the team angrily contacted the owners; the story was the darling of talk radio for weeks, but no one bothered to actually check the place out.

So, in the interest of adding a little perspective to this emerging narrative, I decided to check out McDain’s without searching for community reaction, interviewing Vuick, or even particularly caring where the five-year-olds of Monroeville eat.

The controversy was in plain sight almost immediately. Less than a half-mile away, I passed the Steel City Steakhouse; its signboard defiantly read, “Kids Welcome – Customer Appreciation Day Every Day.” (McDain’s signboard made mention of a Customer Appreciation Weekend.) The notices about children were posted at each entrance to McDain’s. Frankly, the staff looked a little bit weary from all the attention.

I walked into the building, and actually had to look around for a moment to find the restaurant. The building is chiefly dedicated to golf; the bulk of the main room is taken up by an indoor putting area, instructional equipment, and a large desk taking payments for the driving range and such.

The restaurant is off to the side, and it’s small. I didn’t count, but there couldn’t have been more than fifteen tables. The bar is of a decent size; I saddled up and ordered a draft (Labatt Blue Light, $3.25.) The selection and environs reminded me more of a Legion Hall or VFW than anything – a few wines, a few drafts, and the standard liquor setup. Nothing fancy. Sit and watch Sportscenter, that kind of thing.

I ordered a half-dozen wings ($4.95) and the crab-cake sandwich ($8.95.) The lunch menu is standard bar/restaurant stuff – a few salads, a lot of sandwiches, regular entrees like steak and pasta. The dinner menu is longer, but just expands on the same – more choices in steak, seafood, Italian. They mention a “famous burger,” though I think that name will only really apply if they rename it the “No Children Under Six Sirloin.”

As I munched on my wings—pretty good, actually, cooked just right and coated in tangy buffalo sauce—I took in the feel of the place. Sparsely decorated. Light jazz on the loudspeaker mixed with sports talk from the TV. The few decorations present more to partition the small space than add any real character. There’s nothing wrong with McDain’s, but it’s far from a destination. As country clubs have fine dining, this driving range has a mom-and-pop restaurant. It’d be a fine place to stop in if you were just looking to get out of the house for a meal, maybe, and a good place to grab a beer and a sandwich after working on your swing. But that’s about it. There are plenty of places to eat, in Monroeville and elsewhere; this is, frankly, just another restaurant.

I should note that the food is good. I enjoyed the wings quite a bit, and the crab-cake sandwich was excellent, particularly with their “special sauce” – a tangier, spicy tartar. Service was fine, beer was cold. I even bought a small bucket of golf balls ($5) after my meal and tried to remember how to hit them. (I hit one ball, of thirty, in a straight line. It went about 150 yards. I considered this a major accomplishment.)

A pretty good meal at a calm restaurant, and a nice place to drop by for local golfers. That’s the one-sentence summation of McDain’s. And to briefly revisit the brewing controversy, here’s the thing – there’s no reason why you would bring your kids here in the first place. It’s not remarkable enough to warrant bringing the whole family, or even making it a regular stop. I’m pretty sure your five-year-old isn’t gung-ho about going to the tiny place with the smooth jazz and the crab cakes down by the driving range; why are you dragging them here in the first place, parents of Monroeville?

As is the case with many media-produced hubbubs, all involved parties should calm down about this. Outraged parents: this wasn’t the right place for family dinner anyway. Mr. Vuick: you’re not digging your heels in on a good fight, you’re changing policies for your little restaurant. Media: who really cares that much? (And yes, I realize that I, in fact, am writing about this issue as well.)

It’s a good story, with some good wings. Beyond that, much ado about nothing. Now, if you’ll excuse me, I’m off to try and remember how to swing a golf club.