Rev It Up: This South Side Pittsburgh Loft is Unique and Unusual

The three-story home melds all of the comforts of home with the sleek look and efficiency of industrial design. 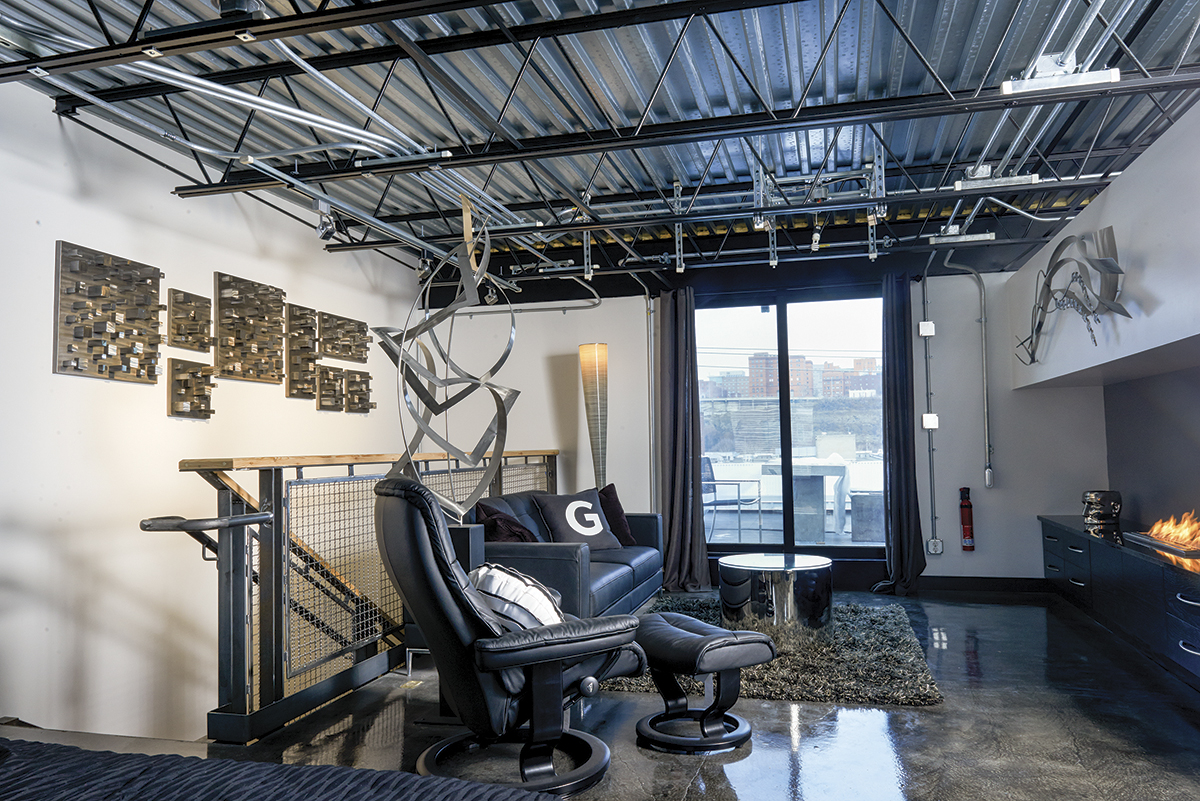 Perched at a high-top table in Josh Gross’ bar area is a dark-gray, metal and wire statue of a seated woman.

When PerLora co-owner Perry Sigesmund, whom Gross hired to furnish his new loft home, first suggested including the piece, Gross says he was skeptical.

“But I love it,” he says. “I move it around. It’s the first thing people comment on.”

It’s gotten even more attention from visitors than the Big Dog chopper motorcycle — which required four men to carry into the home — sitting in the entryway, Gross says. 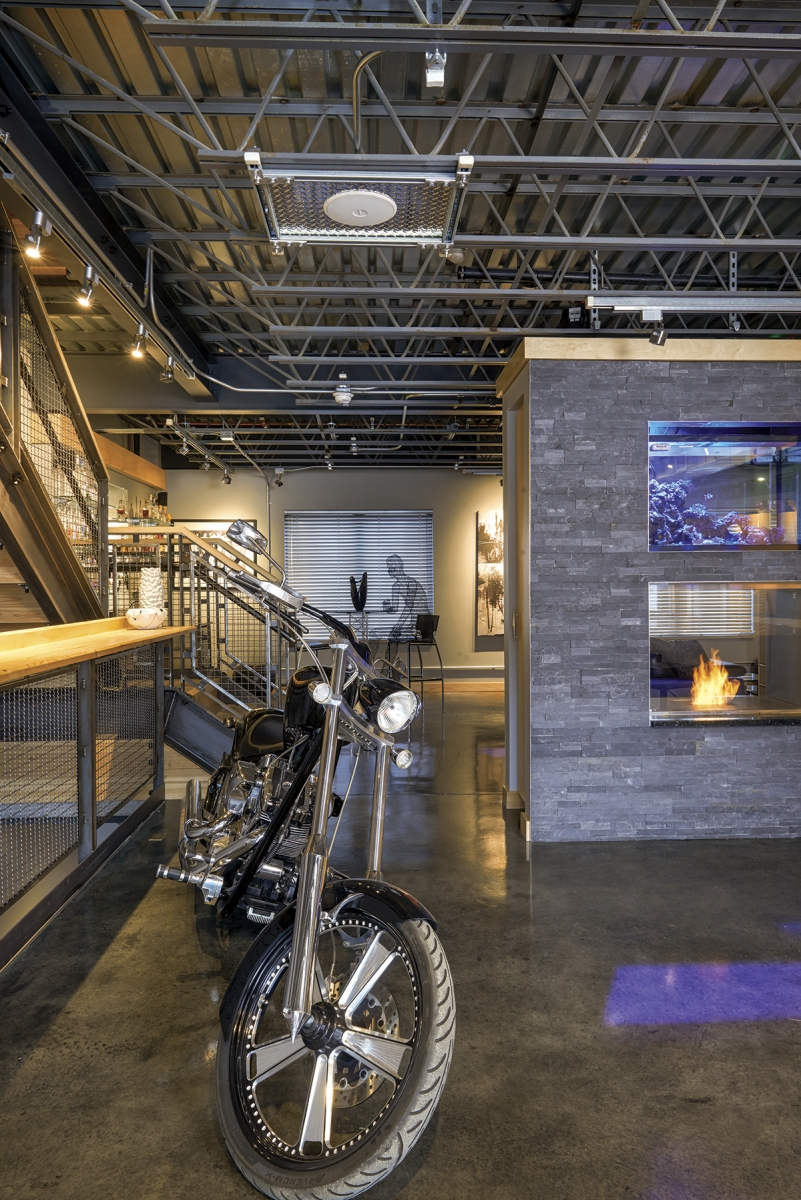 Both are indicative of what Gross aimed to achieve with the design of his space: He wanted industrial, he wanted new and he wanted unusual.

One upcoming addition is a Harley Davidson motorcycle, fashioned into a chandelier and set to be suspended over his dining-room table. Gross says he expects it will become another focal point.

Gross, 38, has lived in the South Side for 17 years. When he was ready to move from his previous home — a church he had turned into a loft — about eight years ago, he wanted to stay in the area, but he says he wasn’t interested in much on the market at that time.

So he purchased two side-by-side properties in 2007 and hired Schaaf Excavating Contractors to tear down one existing structure where he would place his home — he rents the neighboring property. The project took more than seven years to complete.

The home now includes all of the amenities Gross sought — a four-car garage, a master suite with a living area, fireplace and connecting outdoor patio (complete with hot tub), a weight room and a tanning bed. He transformed the backyard into an oasis with a 32-by-40 foot patio with grill, another hot tub and a pool with waterfall.

He hired Jason Lardo of Integrity Construction for the home’s structural framework, but he did most of the interior construction himself alongside Tom Hucko from Modern Carpentry. David Morgan of Morgan Architecture + Design was the general architect; Sam Kiss handled the interior architecture; Mark Seech of Seech Industries did the steel work and staircase; National Woodwork was in charge of the casework; Holzer Jesko Quality Exterior installed the metal siding and roof; and PerLora was responsible for the furnishings and artwork.

Rodger Kennelly from First Call Plumbing did the exposed plumbing, and Mark Boris of M&M Services handled the exposed HVAC.

Everything in the home is sleek, from the stained and polished flooring by Concrete Zen to the silver-and-glass bar area and the garage-style door that connects the dining area to the back patio. 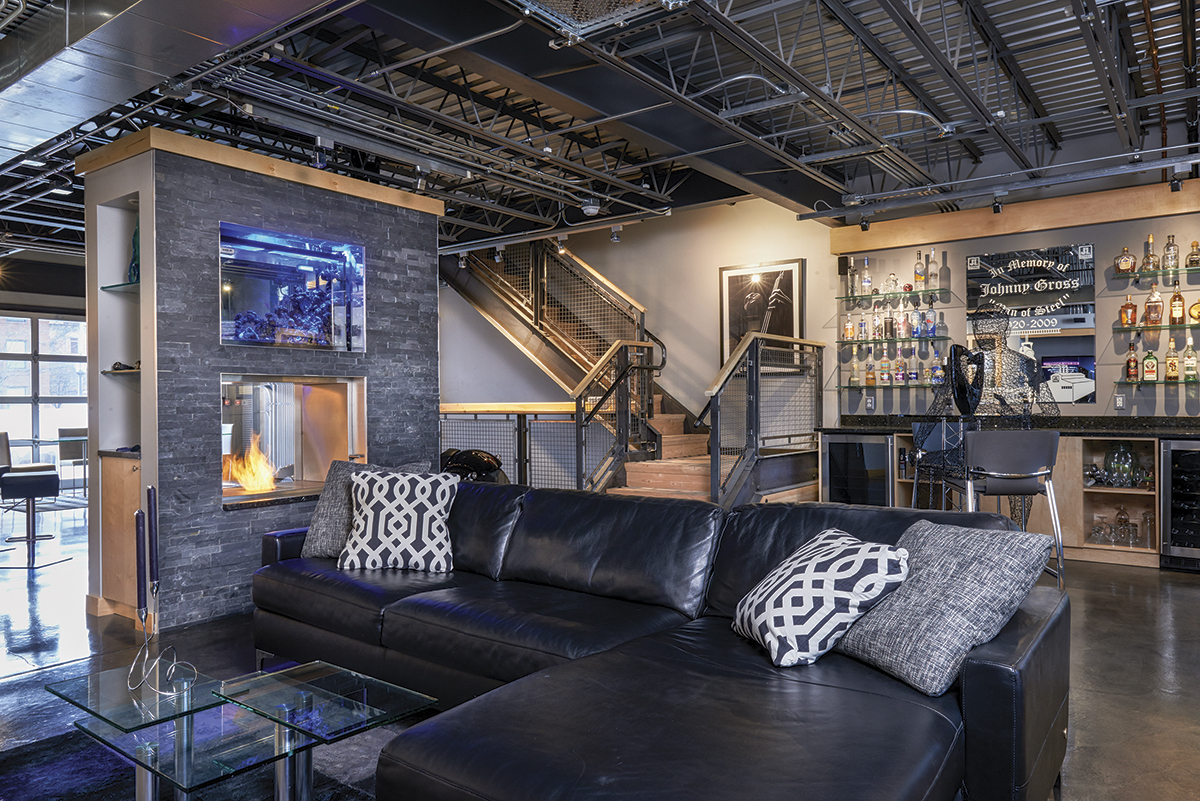 “I’m a metal type of guy, so [Sigesmund] got stuff that matched what I liked,” says Gross, who owns Aurora Electrical and Data Services, an electrical contractor that specializes in work within the wireless industry.

Sigesmund says the project was fun for him because it’s a space he, too, could occupy “in a minute.”

The overall result has a cohesive feel from the exterior to the interior, he says.

“There are lots of different materials used throughout that I think all fit together” from stainless steel to hand-painted art on canvas or wood, he says, noting the materials flow together from one room to the next.

It’s also a comfortable space for entertaining, he adds. The wire statue of the woman brings a touch of personalization, and the dining room and kitchen areas are very spacious. In the living room, the inviting leather sectional offers ample seating.

Gross says he wanted the home to make efficient use of utilities. The exterior walls’ coverings are made of Galvalume coated steel. The Polysteel walls have an R-40 rating, and the building is constructed from energy-efficient insulating concrete forms by American PolySteel.

“When you’re building a 4,000-square-foot house, the utility bill can be expensive,” he says.

Each floor is heated separately with a hot-water system, because concrete floors otherwise would be cool to the touch in winter. The outdoor sidewalks are heated as well.

“It’s a maintenance-free house,” Gross says, noting that even the fish tank — which is suspended above the living room fireplace — is set so that the water will refill automatically.

This article appears in the January 2015 issue of Pittsburgh Magazine.
Categories: From the Magazine, HOME + Design, Hot Reads