Plus the latest foodie trends - what's now, what's 5 minutes ago and what's yesterday. 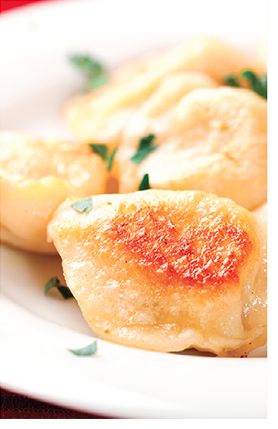 Pgh Pierogi Truck
One sure sign that food trucks are gaining traction here in the ’Burgh: Pierogies are being sold on-the-go. Yes, in a city with deep Eastern-European roots, we can finally order piping-hot potato-and-cheese dumplings from a mobile vendor. Owner Lynne Szarnicki, who’s of Polish descent, grew up making pierogies the old-fashioned way — so if you’ve got a hankering for some authentic dumplings, check out the company’s Twitter feed (@PghPierogiTruck) to see where Szarnicki and her team are taking ’em next.

LeMont
After being in business for 52 years, the LeMont continues to change in ways that keep customers returning. Take the new fall menu, for example, which lures locals with a list of entrées and sides that star some fine seasonal ingredients; creamy pumpkin bisque is served in a mini pumpkin, showing off some of our region’s top-of-the-line fall goods (and flavors). If it’s been a while since you made the trek up to Mt. Washington, this might be all the reason you needed.

Steel Cactus Mexican Restaurant & Cantina
Keeping with this year’s taco-lovin’ frenzy, another Mexican eatery has opened in the ’Burgh.  is time, it’s brought to us by the team behind such area establishments as Local Bar + Kitchen. Steel Cactus, which opened last month, serves homemade tacos (go figure) and burritos, along with other Mexican dishes. Folks visiting its second-floor space — or rooftop deck with island bar — can order lunch or dinner (with one of many mixed drinks featuring top-of-the-line liquors).

Bridge Ten Brasserie
Here in Pittsburgh, we’re like an ethnic melting pot; with restaurants representing
various cuisines from around the globe, you can get a taste of other cultures without leaving home. Further proving this notion true, Dave DeSimone recently opened Bridge Ten, a classic French brasserie, in the space next to the Holiday Inn Express & Suites in South Side. DeSimone, a wine buff, recruited experienced chef Shawn Carlson to be head of the kitchen. At Bridge Ten, there will be special items offered on a monthly basis, highlighting food from various French regions. Bonus: Though Bridge Ten is situated in bustling South Side, lunchtime patrons can park for free, and evening guests can take advantage of valet parking (so no need to hunt for a spot for 45 minutes!).