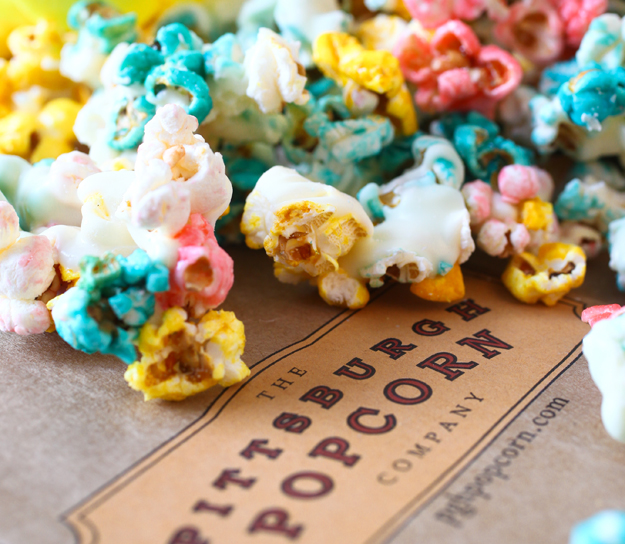 Peep This
>> Freshly popped corn is one of nature’s wonders — so incredibly light that it melts on your tongue, yet it satisfies like no other snack. Pittsburgh Popcorn Co. improves upon this perfection by creating to-die-for sweet and savory flavors, often with a fun seasonal spin. This month’s special variety is Marshmallow Peep: The popcorn, drizzled with irresistible marshmallow topping, comes in attention-grabbing springtime pastel colors. (three area locations; pghpopcorn.com)

Tamari
Many restaurants serve sushi and small plates. But not all are like Tamari. The original eatery, located in Lawrenceville, has been favored for its creative fusion cuisine, earning a spot in our 2010 and 2011 Best Restaurants lists. Which is precisely why folks who live in the northern ’burbs should be ecstatic right now (if they weren’t already): Owner Allen Chen and chef Roger Li officially opened the doors of the Warrendale site back in mid-January. Aside from its location, the second eatery isn’t much different than the original. And the good news is that the Warrendale eatery is now offering lunch and dinner services to those who just can’t get enough of the robata grills.

Marty’s Market
The Strip District is unofficially known as our local “food Mecca” — and for good reason: Where else can you buy Mexican street food, imported cheeses and some fantastic pierogies? Adding to the area’s culinary appeal, Marty’s Market plans to open its doors later this season in the space formerly occupied by Right by Nature. Marty’s bills itself as a “community-minded specialty market, coffee bar and café” —  meaning that this is yet another place you’ll need to visit during your trips to the Strip. Here, freshness and local are the two key buzzwords, as the market will sell high-quality foods sourced within 150 miles of the store (think antibiotic-free meats and specialty items).

My Big Fat Greek Gyro
Just when we thought Market Square was already packed with restaurants, it welcomed another tenant in February: My Big Fat Greek Gyro, a local franchise, expanded its operations by bringing Mediterranean fare to Market Square. Perfect for cheap-eats fans, this place dishes out classics — spanakopita (those irresistible spinach-stuffed pies), gyros and baklava — at reasonable prices. Keeping with the restaurant’s name, there’s also a whopping three-pound gyro on the menu, one that’s crowned with tomatoes, onions, lettuce and tzatziki sauce — and it’s completely free if you can devour it … in an hour or less.

Hough’s
Its impressive beer list, among other things, helped Hough’s put Greenfield on the map as a place where younger locals could shoot the breeze with pals any given night of the week. This winter, however, it finally opened the city’s first brew-on-premises brewery, upping its draw (as well as that of the neighborhood). For Copper Kettle Brewing Co., sibling owners Matt and Greg Hough developed a two-week process, wherein patrons of all stripes come in for a series of appointments, customizing their beers (similar to Build-a-Bear, says Greg) and eventually returning to pick up their hoppy creations.