Don't get left on the back burner - our foodie report has you covered. 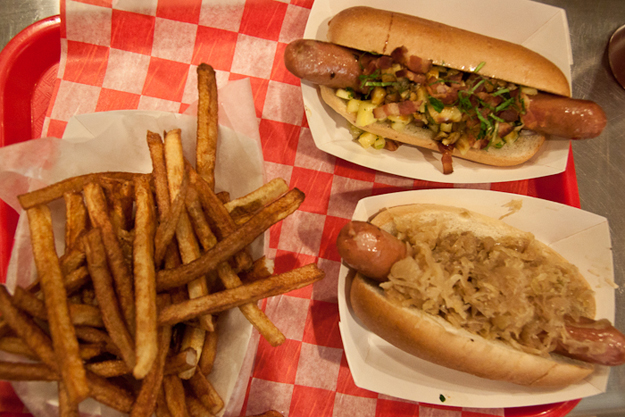 Station Street Hot Dog
With two original restaurants under his belt (Salt of the Earth and Union Pig & Chicken, both in the East End), renowned chef Kevin Sousa is a busy guy. But when he came across an opportunity to take over another establishment (with the help of his brother, Tom, and Jay Finelli) he couldn’t pass up the opportunity. Station Street is open six days a week (closed Sundays) and offers top-of-the-line all-beef and veggie dogs — such as the “Hawaii,” featuring pineapple salsa, bacon and sweet soy; and the “Banh Mi,” with pork liver, pickled cucumbers and red onions, jalapenos, sweet chili, and cilantro. In addition, fresh-cut and duck-fat fries will also be offered at the hip, redesigned shop.

314 Pasta & Prime
Over the Thanksgiving holiday, chef Dave Racicot broke some shocking news via his blog: He’d be closing notion, opening a casual eatery in its space and preparing to reopen notion in East Liberty later this summer. As promised, Racicot opened the doors of 314 Pasta & Prime, a family-oriented community restaurant, in mid-January. Completely different than its predecessor, 314 dishes out familiar food with an Italian flair. The lunch and dinner menus feature similar offerings (like a build-your-own pasta option) — but dinner also brings noodle entrées (think fusilli and bucatini) as well as a few meat options.

Stagioni
When Bloomfield favorite Stagioni announced it’d be moving to the space formerly occupied by Le Pommier, loyal patrons were a little surprised. The intimate eatery, which was listed among the region’s 25 Best Restaurants in our June 2011 issue, had been aptly located in Pittsburgh’s “Little Italy” for a number of years. By moving, though, owners (and sweethearts) Cara DelSignore and Stephen Felder can offer bar service and hold gatherings more often (previously, they only hosted monthly wine dinners as well as Sunday brunches and suppers). And to answer the burning question: Their handmade, authentic Italian fare will remain untouched.

Bar Symon
Star chef Michael Symon, known for his bold (and original) creations, already owns a few eateries — including the much-lauded “crown jewel” of his hometown: Lola Bistro in Cleveland. But he couldn’t stop there. Airmall USA revealed in early January that the “Iron Chef” would be opening his first airport eatery in Pittsburgh International. Expected to open this spring, Bar Symon will offer some of his signature dishes, like the Lola burger, as well as comfort-food favorites, like mac-n-cheese, served up with a twist. No word yet on whether or not Steelers gear will be on display.