The Food Network star talks about his new book, his new magazine and offers culinary advice. 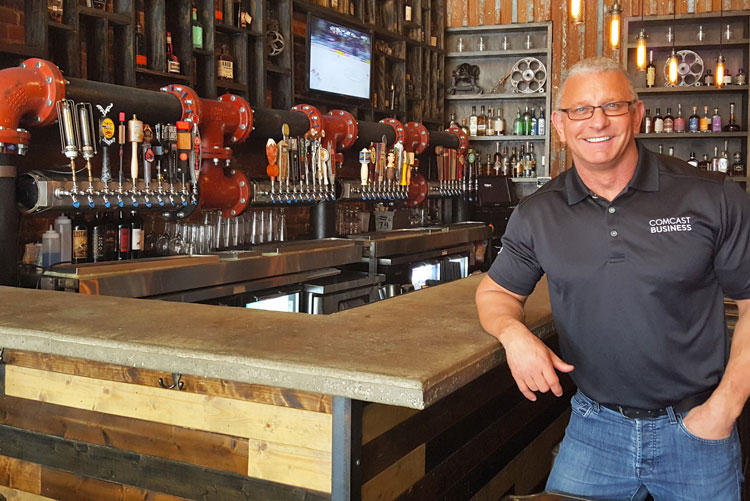 Irvine is no stranger to Pittsburgh. He’s helped reinvigorate three restaurants in the Greater Pittsburgh area on Food Network’s “Restaurant Impossible,” and his number-one selling protein bar, Fit Crunch is made here locally at Bakery Barns in Pleasant Hills.

You’ve helped three local restaurants via Restaurant Impossible, including Del’s in Bloomfield and Stella’s Restaurant in New Kensington. Do you still keep in contact with any of the owners? What is like working in Pittsburgh?
I keep in touch with most of them, not all of them. We’ve done 168 episodes … 84 percent of which have been successful to this date, the rest have failed. But I even keep in contact with those that have failed. And failure is a questionable statement. I have a restaurant in Boston that has closed, but it closed because the son died and they sold the restaurant – so is that a failure? I don’t think so, but some people would say yes. So I don’t know the answer to failure. What does that mean?

Your optimism and intensity may be what sets you apart from other celebrity chefs, but the reality of it. How important is positivity especially in such a demanding profession like the service industry?
Intensity is me period. I think more so in the hotel and hospitality industry just like in sales – there are criteria that the restaurant has to hit through food cost, labor cost, etc. and quality of the product. And I think the intensity of the persons running that kitchen or that business sets the tone for excellence. So, you know like the show, “Restaurant Impossible” is thirty-six hours of real-time and there’s no time to go ‘Well how do you feel today?’ It is finding out the problems and fixing those problems in a very short amount of time.

You just launched, “Robert Irvine Magazine.” The magazine seems very health and fitness oriented. Was that the goal?
That is the main focus. So when I launched the book, a publisher didn’t want to publish a fitness book. And I said well my viewers and my guests are asking for it, so I’ll do it on my own. We launched Fit Fuel in August and it’s already in its fifth printing. The specialist said ‘no female will buy this book,’ eighty-eight percent females buy the book. The magazine was asked for, so I went out and hired a top-notch team from Muscle and Fitness, and Matt Tuthill, who helped me write the book and some other books and we launched that about a month ago. And it is specifically driven health fitness and general interest. So we put a lot of general interest in the magazine, as well as cooking tips, how to buy food, how to live your lifestyle and change your lifestyle if you want to change without going to the gym.

Your number one protein bar, Fit Crunch is made here, locally in Pittsburgh. How did that partnership with Bakery Barn come about?
Sean Perich, whom my business partner and I met through his daughters. His daughters are six and eight years-old, dancers and huge “Restaurant Impossible” fans, and they came to my live show here in Pittsburgh. Actually he called me and said, ‘Can I get VIP tickets?’ We got him the tickets, and he came back and I met him because he said I went to taste some bars, and I didn’t like the bars. And I said this is one version of a bar for us. And he said, well I can make that. And we became partners and here we are three years later. We’re in 73,000 locations and its vastly becoming "the" bar. We’re about to launch some new flavors.

The service industry in itself is difficult and very stressful environment. What is your advice for young chefs to avoid falling into anxiety traps and letting the pressure get to them?
Chefs have to not take themselves too seriously. I think we put so much pressure on the dining public that comes in and they’re spending their hard earned money, but the more you stress over it. Go to the gym and get a gym membership and workout before you come to work. I think the more you can release the stress somewhere else before you come to work the easier your days are going to be. Also if you’re working with people you don’t like working with – don’t work with them, sorry. I worked with some really bad chefs and they just push and push and push until you do break, and that’s not a way. When I grew up in this industry it was people throwing cups and glasses and pans, and there’s no need for that. You can be strict and you can teach, but you don’t need to be not a nice person. So, if you don’t like them, don’t work with them. Study more. Not just in the kitchen. Get online. Learn more.

What do you think of the Pittsburgh food scene?
Pittsburgh is changing dramatically. They have some great restaurants. Not just Food Network chefs, there’s some great little places – hole-in-the-wall- and every city has them. But it’s up to the local communities to make sure they frequent them. Otherwise they go and change comes in and takes over. I think the ‘Burgh has some great places. I’ve been to some amazing places here.

This interview has been lightly edited for length and clarity. —PM