Grab a turkey leg and practice your best High English accent, because the Pittsburgh Renaissance Festival runs through September. 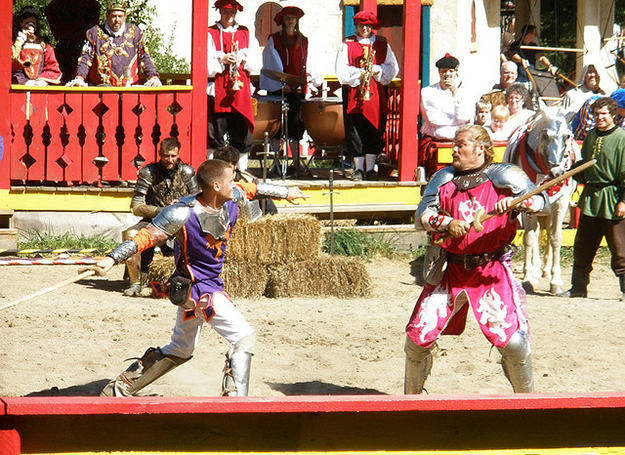 GRAB A TURKEY LEG — IT'S RENAISSANCE FEST TIME
What hearest thou, from yonder heath? The clang of swords? Forsooth, a faire, sirrah! Elizabethan culture comes alive at the Pittsburgh Renaissance Festival, the annual family-friendly gathering of knights, maidens and juggling jesters. Nowhere else can you chew a leg of salted turkey and watch armored men joust each other with actual lances. You’ll find an entire village of period performances — plus, patrons are also encouraged to don their own corsets and pantaloons.

A LESS-THAN-TRADITIONAL TAKE ON POLITICS WITH THE KINSEY SICKS
OK, let’s see here. I’m going to draw four adjectives out of a hat, and that’s what we’re going to lead off with this week: “drag” … “a capella” … “musical” … “comedic.” Now, many weeks, it’d be a challenge finding something that fits those descriptors — but today, we’ve got just the thing.

The Kinsey Sicks are an internationally touring comedic powerhouse, presenting original and cover performances a capella … and, yes, in drag. (The term the Sicks use is “Dragapella Beautyshop Quartet,” if that clears things up for you.) This weekend, they bring their election-year revue Electile Dysfunction: The Kinsey Sicks for President to the City Theatre. Don’t think it’s all just camp, though; DC Theatre Scene praised the group’s “glitter and glamour, the high heels and big egos, the shrewd pokes and rude jokes.” Sixteen-and-over only, please — but if you’re of age and you feel that our somber political process needs to be taken down a peg (yet again), this is the show for you.

'MARRIED IN SPANDEX' AT THE HOLLYWOOD THEATER
Pittsburgh natives Devin Gallagher and Allison Kole are taking their acclaimed documentary Married in Spandex around the country — and tomorrow night, they’ll finally bring their work to their hometown. The film is about an unlikely wedding ceremony; beyond that, though, it has plenty to say about the institution of marriage in the 21st century. Don’t miss the local premiere in a one-night-only screening at Dormont’s Hollywood Theater, complete with music, a Q&A with the filmmakers and more. Get a full review in this week’s edition of After Dark!

In Theaters: New films coming to Pittsburgh this weekend include: star-studded literary drama The Words, with Bradley Cooper, Zoe Saldana and many more; under-the-radar actioner The Cold Light of Day, with Sigourney Weaver; and David Cronenberg’s take on the Don DeLillo novel Cosmopolis. PM Film Editor Sean Collier will appear on the 102.5 WDVE Morning Show at 9:40 Friday morning to review The Words; since The Words is about plagiarism, he wonders if there’s a critic anywhere in the world with the gumption to steal a review. Tune into 102.5-FM or DVE.com for Sean’s review!

Unwind Friday night at Riverlife's Party at the Pier 2012: Neon & Nature. You'll not only get a great light show, but also help Riverlife reclaim, restore and promote Pittsburgh's riverfronts with all proceeds. Click here for more.

As part of National Recovery Month, nonprofit human services organization Familylinks is presenting free training seminars for individuals in recovery, their families and friends who have offered support along the way, and those who work in prevention, recovery and support services. This Tuesday, Familylinks training director John Amato will present “Spirituality: The Heart of Recovery” at 250 Shady Ave.; registration is required. To register, please contact training coordinator Deborah L. Murphy at dmurphy@familylinks.org or 412/924-0115.

This article appears in the September 2012 issue of PMWeekend.
Categories: Things To Do