A world renowned French pantomime artist, an astronaut, a TV news anchor and a beloved chef are among the notable visitors to Mister Rogers' neighborhood. 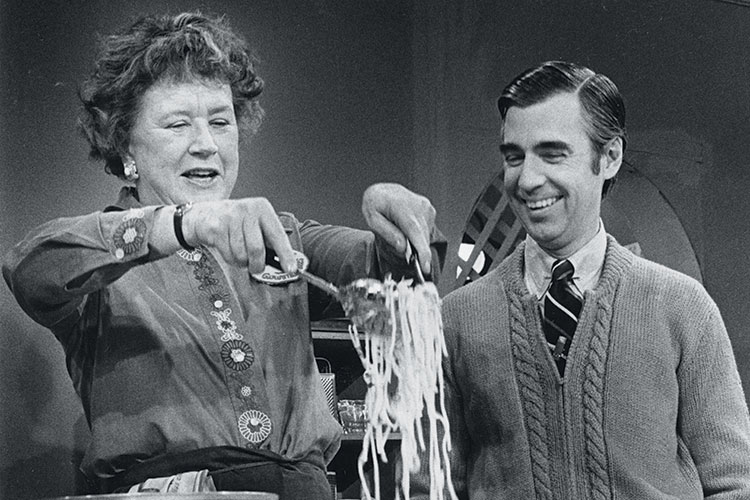 Star chef Julia Child was one of many famous visitors to “Mister Rogers’ Neighborhood.” | photo: shutterstock

Won’t you be my neighbor?” The question is an invitation to the world. When Fred Rogers sang that song some 900 times between 1968 and 2001 in the WQED studios, many people heard it. Some fortunate ones came to Pittsburgh to spend some time in “Mister Rogers’ Neighborhood,” one of the most famous locations in TV history.

In 1973, the great French pantomime artist Marcel Marceau was touring America. Rogers hosted Marceau for an evening reception at his home; meanwhile, the production team had made arrangements to shoot a whole program featuring the performer in one day. The episode included scenes where Marceau appeared as himself, as he did in encounters at King Friday’s Castle and Grandpère’s Eiffel Tower. Marceau then got into character as Bip, his famous mime role, for a special performance.

Astronaut Al Worden was impressed by Rogers’ renowned episode that explained death through the passing of a goldfish. Rogers accepted an offer from Worden to appear on the show; Rogers first produced a special shot primarily at Cape Kennedy, which tried to answer some of kids’ concerns about space travel. Later, while serving as command module pilot on Apollo 15 from July 26 through Aug. 7, 1971, Worden took along a list of things “Neighborhood” viewers wanted to know about space flight, considering them as he orbited the moon. The list he carried is now archived at the Fred Rogers Center at St. Vincent College. Worden later appeared on several episodes of “Mister Rogers’ Neighborhood,” discussing eating food and writing poems in space, among many other topics.

David “Mr. McFeely” Newell remembers seeing ABC anchor Ted Koppel host a program on Soviet television in 1987; in it, Koppel compared the popular children’s show “Spokoinoi Nochi, Malyshi” (“Good Night, Little Ones”) with “Mister Rogers’ Neighborhood.” Newell thought Fred could do something with that show; that autumn, Rogers and a crew traveled to Moscow to appear with hostess Tatyana Vedeneyeva and her puppets, Khryusha the piglet and Styopa the rabbit. The following March, Vedeneyeva and Styopa returned the neighborly visit in Pittsburgh. Newell remembers having lunch with her and an interpreter at Duranti’s Restaurant on North Craig Street in Oakland.

Maybe the most flavorful on-screen visit to the Neighborhood occurred in 1974, when Julia Child stopped in at Brockett’s Bakery and showed Fred and Chef Brockett how to make Spaghetti Marco Polo. She had Brockett cook up some pasta and added walnuts, black olives, green onions, Swiss cheese, red pimento and a can of tuna packed in oil. She talked about the trash can behind the counter where she cooks (“Everybody thinks I’m throwing things on the floor!”) and, after garnishing with chopped parsley, fed both Fred and Chef Brockett tastes with chopsticks.

Later on the program that featured Child, Smokey Bear also stopped for a visit. Anyone and everyone could be a neighbor.

This article appears in the June 2019 issue of Pittsburgh Magazine.
Categories: Rick Sebak