Veteran journalist Bob Dvorchak looks back on the life of the Super Steelers’ celebrated coach. 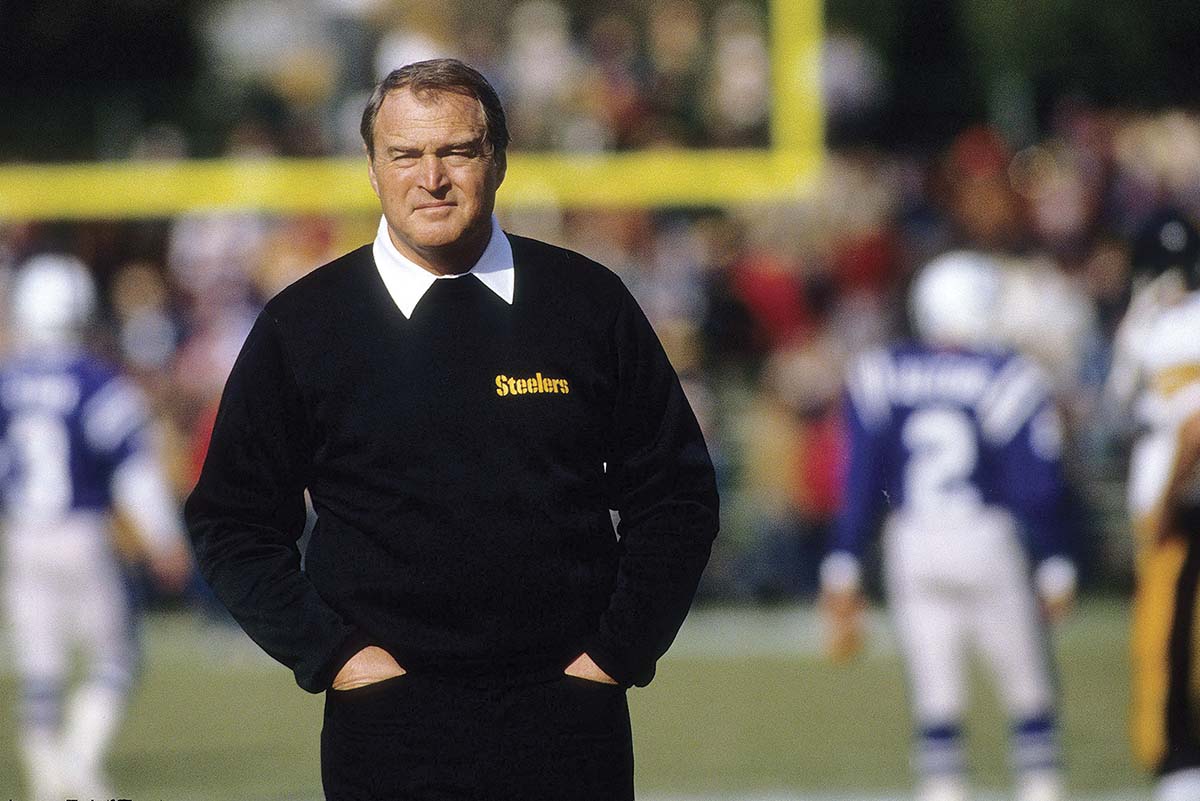 Back in 1970, when I was working my way through college at The Morning Herald newspaper in Uniontown, Pa., my first out-of-town assignment was to cover Chuck Noll’s news conferences on Mondays after games.

He was asked once, following a particularly galling loss: How did he feel?

“The same way I always do,” Noll deadpanned. “With my fingers.”

When he retired after the 1991 season, Noll pretty much dropped off the radar — which means a whole generation hardly knew him. If it’s any consolation, many of those who came of age with him as the head coach of the Pittsburgh Steelers hardly knew him either. But we remember Noll, who died June 13 at the age of 82, as the architect of a football dynasty and the man who gave us reason to be proud of hailing from Pittsburgh.

Noll never sought the limelight. He had his own personal Steel Curtain to guard his privacy. If he said it once, he said it a thousand times — a person is defined by deeds, not words. He is the first and only NFL coach to win four Super Bowls, a feat he accomplished in the span of six glorious years in the Super Seventies.

During one of those appearances, someone in the national media tacked up a sheet with the highlights of a Chuck Noll news conference. The paper was blank.

We remember him differently. He was a Renaissance man in a Renaissance city — a nonpareil football coach who piloted airplanes, skippered sailboats, loved classical music and Stan Getz jazz, explored coral reefs in scuba gear, was a wine connoisseur and cultivated rose bushes. The latter was something he learned from his mother, who worked for a florist in the family’s home neighborhood on Cleveland’s East Side.

Once, when he had to cut an aging player, Noll said philosophically, “Sometimes you have to prune a rose bush to allow for growth.”

Noll never ingratiated himself with the media or called attention to himself because he didn’t think it would help him win football games. Don’t misunderstand — the man had a supersized ego. He just didn’t have any vanity. Deeds, not words.

It takes a big ego to take the reins of a franchise that endured nothing but losing for 38 years before he arrived. In Steeler lore, those years were B.C. — Before Chuck. Yet he transformed a football team and in the process changed the way a city felt about itself.

He won his first game with the Steelers and then lost 13 straight to finish the season. The team lost the first three games the next season, marking the worst start by a coach in the Steelers history. Noll never flinched. He never flinched in 1989 either, when the Steelers lost their first two games by a combined score of 92-10. They rebounded to make the playoffs.

Noll could have made millions in endorsements but instead steered such rewards to his players. One time, he did an ad as a favor for a friend with a Pittsburgh bank. Under Noll’s smiling visage were the words: “Save $500, get this free shirt, and you’ll look good too.” He was embarrassed when he saw it on a billboard outside the Fort Pitt Tunnels coming into the city.

During his playing days at the University of Dayton, teammates called him “The Pope” because he was never wrong. He majored in education, focusing on math and science, and he would have been a teacher if he hadn’t been offered a contract by the Cleveland Browns.

Once, he used physics to explain the Immaculate Reception: Every action has an equal and opposite reaction, which proved that the ball hit off Oakland defender Jack Tatum before it bounced to Franco Harris. Then Noll turned to his silent audience of sports writers and said, “I forgot. I’m talking to a bunch of English majors.”

In his final years, the after-effects of back injuries meant he could walk only with the help of two canes. He called them Cain and Abel. Alzheimer’s disease robbed him of that magnificent mind and a wit as dry and full as Chablis Grand Cru.

When asked once what advice he would give to anyone exiting the stage, Noll said, “Don’t leave anything on the beach but your footprints.”

He left a lot more than footprints. There’s a street named for him on the North Side, and his name graces the football field at St. Vincent College, where the Steelers train. Dan Rooney said at Noll’s retirement that if anything had happened to him, he would have wanted Noll to raise his children. What more do you need to know about a man?

Noll’s passing on Friday the 13th, on the night of a full moon, created a void — yet this native of Cleveland gave so much to Pittsburgh. If we know how to listen, Charles Henry Noll will be speaking to us and teaching us for a long, long time.
With deeds, not words.

This article appears in the August 2014 issue of Pittsburgh Magazine.
Categories: Steelers