There are countless tales of his kindness and affection for his fans, known collectively as “Arnie’s Army.” Rick Sebak shares a few of them. 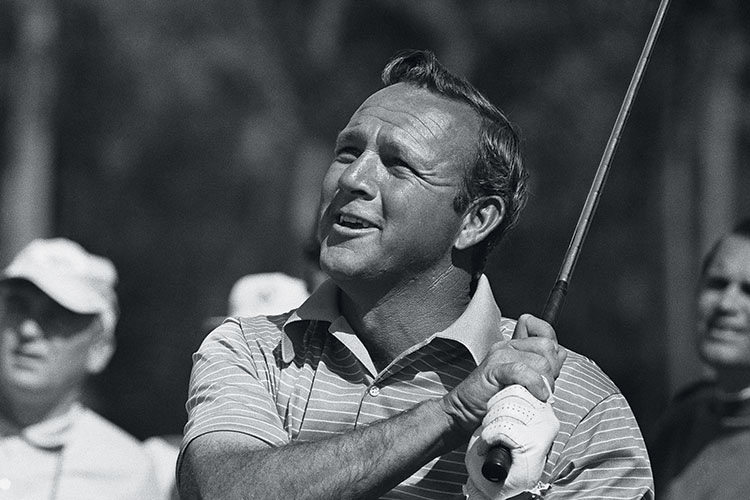 The death of Arnold Palmer, while terribly sad and unexpected, also has been a somewhat marvelous and wonderful thing to live through. No one has a bad word to say about this man, this great handsome golfer, this relaxed international celebrity, this pilot, this generous philanthropist, this designer of golf courses and wise concocter of refreshing drinks, this very good guy from Latrobe. We all should leave this earthly clubhouse with such accolades and appreciations and kind words to see us on our way.

Even Mother Nature seemed to want to honor him. On Thursday, Sept. 29, when his ashes were spread on the golf course at Latrobe Country Club in Westmoreland County, a beautiful complete rainbow appeared — a natural phenomenon that seemed to highlight how important and admirable this good-hearted sportsman truly was.

Some folks called him “The King,” a nickname from the 1960s when he became famous for his many winning appearances on television. But he was completely a man of the people. He was born Arnold Daniel Palmer on Sept. 10, 1929, in the tiny town of Youngstown, Pa., just beside the old sixth hole of Latrobe Country Club — where his father, Deacon, was the golf pro and course superintendent. He was the first of Deacon and Doris Palmer’s four children.

In 1985, in an interview with the Times of London, Palmer explained, “I grew up in poverty on the edge of a golf course. I saw how people lived on the other side of the tracks, the upper crust and the WASPs at the country club. We had chicken and pigs in our yards.” And he laughed at the idea of his royal status, saying, “There is no king of golf. Never has been, never will be. Golf is the most democratic game on Earth … It punishes and exalts us all with splendid, equal opportunity.”

He distinguished himself playing golf remarkably well in high school, then at Wake Forest College. In 1954, he won the U.S. Amateur; after that, he quit his job selling paint. He would go on to win 92 professional championships worldwide. His enjoyment of the game was infectious, and he was a big reason why golf became a hugely popular pastime in the second half of the 20th century.

I myself never was lucky enough to meet him. I knew, however, that my bicycling friend Linda McKenna Boxx grew up in Latrobe (where she’s now chairman of the Katherine Mabis McKenna Foundation) so I gave her a call. She said she knew Mr. Palmer well. “After my father passed away in 1995, I was elected to fill his seat on the Latrobe Country Club board,” she says. “So I got to be with Arnie Palmer at least [once] every year at the annual meetings. He was always gracious — a gentleman with a true passion for golf and a concern about the future of the sport. And a love of his home club.

“After the board meetings,” McKenna Boxx remembers, “there would usually be drinks and refreshments. Many times I’d have an Arnold Palmer with him — because how could you not?”

She also commented on his grounded view of himself, in spite of his superstar status. “There was not a boastful bone in his body. He always had the attitude, ‘I’m just a guy who plays golf well,’” she says. But she admitted his importance to Latrobe was monumental. “Part of his identity, his ‘brand’ if you will, was that he was from a small town in western Pennsylvania.” And although Latrobe also is renowned as the hometown of the banana split, Fred Rogers and Rolling Rock beer, it was Palmer who made the town’s name familiar to sports fans around the world.

There are countless tales of his kindness and affection for his fans, known collectively as “Arnie’s Army.” The name came from a sign held up in 1959 by some servicemen at the Masters Tournament in Augusta, Ga. Palmer won the Masters four times: in 1958, ’60, ’62 and ’64.

Before that, while a student at Latrobe High School, Arnie won the WPIAL Golf Championship twice, 1946 and ’47. Sam Hall of WTAE-TV recently served as an announcer at the 2016 WPIAL finals for the MSA Sports Network; I asked him if he ever had the privilege of meeting “The King.”

“Yes. In fact, he saved my broadcasting career when I was just getting started,” Hall says. “It was 2001, and I was just starting at the old WTAE radio. I usually just went to [events] and helped to gather sounds and interviews, but this time I was on my own. I was sent by myself to the Marconi Pennsylvania Classic at Laurel Valley Country Club in Ligonier. My boss said, ‘Get what you can, but be sure to get something from Arnie.’”

Hall remembers taking a stroll around the course, gathering some sound. He then went to the press room, where he expected to be part of Palmer’s press conference. After waiting a while, he asked a PGA official when Arnie was expected; the guy said, “Oh, he’s been here and gone.” While Hall was out on the course, Palmer had met with all of the other members of the press, and he was done. Hall was ruined.

“I completely had a heart attack,” he remembers. “I was a complete failure. It was my one big job: Get something from Arnie. I launched into a major panic attack.”

Crushed, Hall stepped out of the press room and noticed Palmer outside signing autographs. He tentatively approached the gathered fans. Clutching his tape recorder, Hall must have looked devastated — because Arnie looked up, saw his agony and asked, “What’s the matter, man?” Hall spoke as fast as he could, frantically trying to apologize and explain why he’d missed the scheduled press availability time. Palmer put his arm around Hall and said, “Let’s try to calm down. There’s a bench over here. Let’s sit down and relax for three minutes. When you get settled down, I’ll sit and talk with you as long as you would like.”

“It was like a miracle,” Hall remembers. “We talked about the tournament. I got 10 or 12 good minutes, one-on-one with the man himself. I wouldn’t lose my job. I wasn’t finished. And I could tell my dad that I talked with Arnold Palmer, whom my dad loved. In fact, I learned to golf by playing with my dad — but I sometimes put the two of them together in my mind.”

Folks all over western Pennsylvania have that affection for Arnold Palmer. He became world-famous, but he certainly never forgot where he came from. He’s also much loved around Orlando, Fla., home to Arnold Palmer’s Bay Hill Club and Lounge as well as the Arnold Palmer Medical Center Foundation, but he always kept his home in Latrobe.

At his memorial service on Oct. 4 at Saint Vincent College, Jack Nicklaus — one of Palmer’s arch-rivals and greatest friends — said, “He was the king of our sport, and he always will be.” His death came as a surprise at the end of September, but it has led to an amazing outpouring of love and affection for a man who was so much more than a good golfer.

He was the best sort of local legend and real-life superstar.

“Golf is the most democratic game on Earth … It punishes and exalts us all with splendid, equal opportunity.”
This article appears in the November 2016 issue of Pittsburgh Magazine.
Categories: From the Magazine, Hot Reads, Sports