These couples wanted their wedding photos to reflect how they met and where they got engaged. 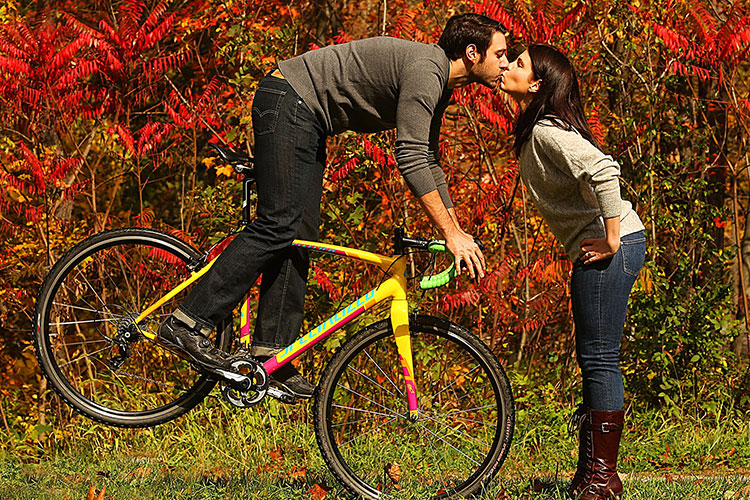 Off to the Races
When Michelle Zorrilla first moved to Pittsburgh for graduate school, she wanted to get involved in a hobby that might help her meet people. She chose to buy a bike and luckily found herself in the shop where Gregg Shanefelt worked.

Another employee sold Michelle her first bike — little did she know it was the future best man of her wedding — but after she left, he teased Gregg that he should help Michelle the next time around since he was the only single guy in the shop.

Gregg wound up selling Michelle her second bike, and he convinced her to try racing. It quickly became something they did together, as a couple. 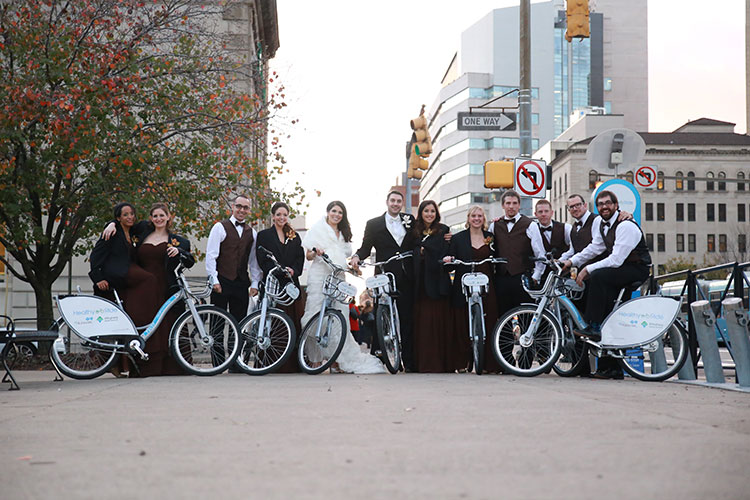 They had incorporated bikes into their engagement photos, which Michelle loved. Gregg did a trick on his bike and leaned in to kiss her at the same time, and she smiled repeatedly as friends and family asked how that was photoshopped and she replied no, Gregg can do that.

When it came time to plan their wedding, the pair knew they wanted to include the thing that brought them together into photos. One of Gregg’s groomsmen was the director of operations at Pittsburgh Bike Share, so he arranged for the couple to get bikes for some photos. 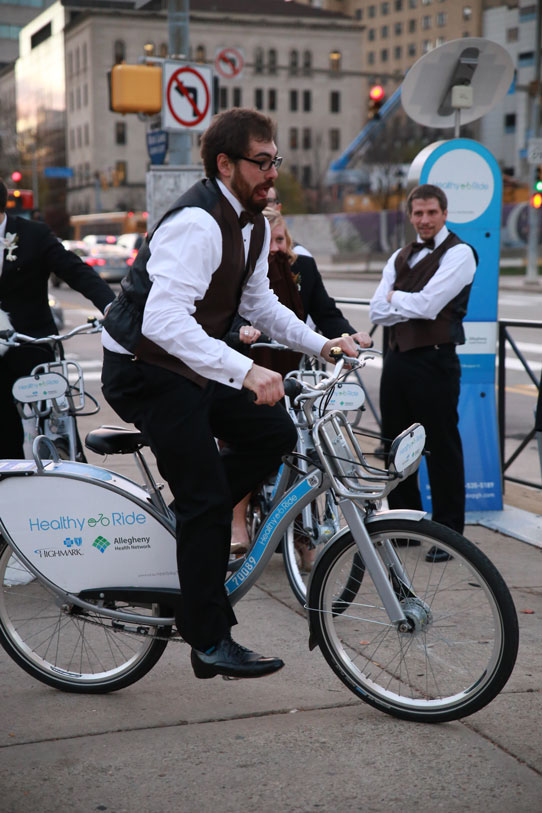 As the bridal party pulled bikes off the rack across the street from Pitt’s campus, the groomsmen grew animated.

The guys biked around doing tricks on and off camera, while Michelle lamented that she couldn’t ride a bike in her wedding dress.

As everyone played with the bikes, her photographer told her to lean in to Gregg, and they kissed at just the right moment for a beautiful shot of them leaning over the bikes, with the sun behind them. 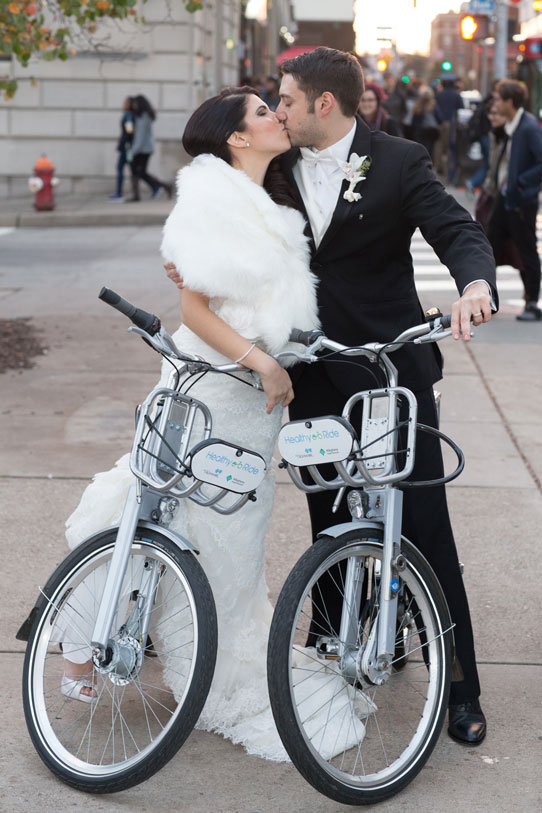 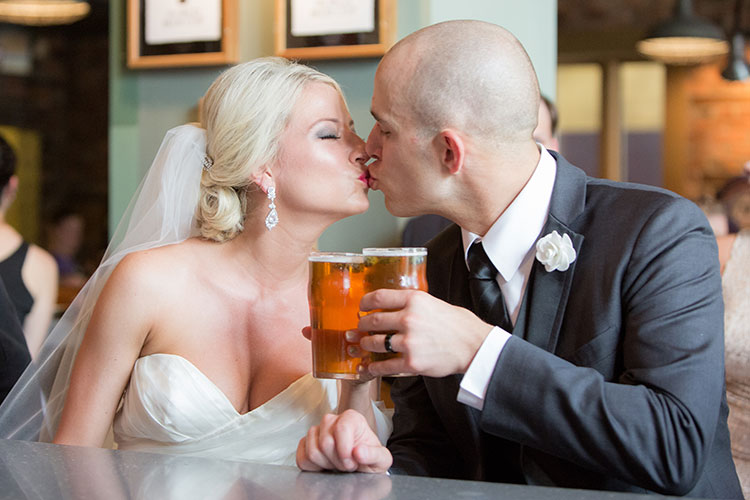 Raising a Glass
Chris Mueller and Alex Knerr had a Sunday tradition of rolling out of bed in sweats and heading over to Fat Heads to have brunch and watch the Steelers game.

The two love craft beer, and it had been a tradition for them and a large group of their friends. But even as their friends moved to other places, the two continued going to sit on the same barstools and considered the bartenders to be close friends.

One Sunday morning in January, they went to Fat Heads, and Alex waited for the bartender, Ben, to line up samples for the pair to choose from, as he usually did. However, on this morning, the bartender, Ben, confidently told Alex he had the beer for her, and he pulled a dark beer from the fridge.

Alex looked at it skeptically: She didn’t like dark beers and wasn’t up to trying it. But the bartender slowly turned the bottle around so the label faced her, and she noticed the label had a picture of Chris kneeling down. It read, “Chris’s Proposal Ale.”

Chris called Alex’s name as she fixated on the bottle, and she turned around in her seat to see him down on one knee, a photographer behind him. 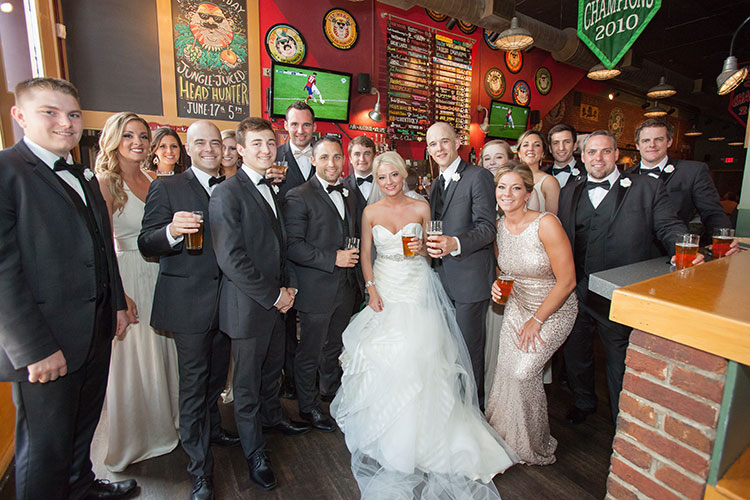 Having gotten engaged at Fat Heads, the pair decided to plan their wedding pictures around the saloon. They told potential photographers that they didn’t care where they shot photos, so long as they could snap a few at Fat Heads, drinking beers in a wedding dress and a suit.

The bridal party absolutely loved the decision, having once been a part of the Sunday Fat Heads tradition, and Alex and Chris liked being inside the place in something other than sweatpants. 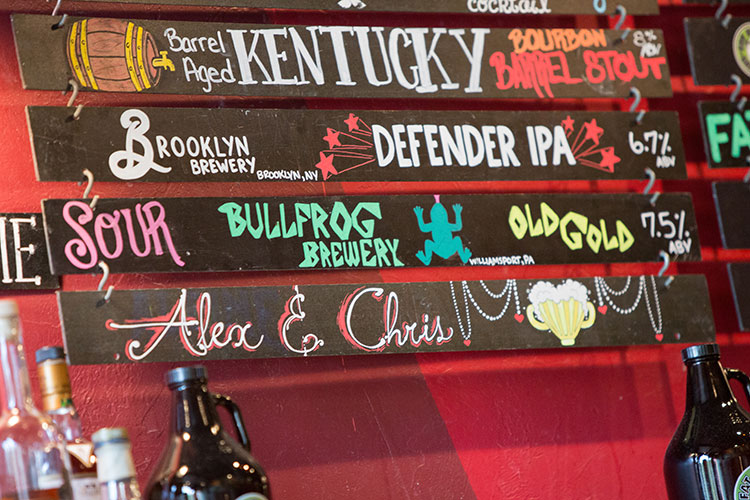 Ready to make more memories, the couple already jokes about bringing their kids to Fat Heads to sit at the bar. 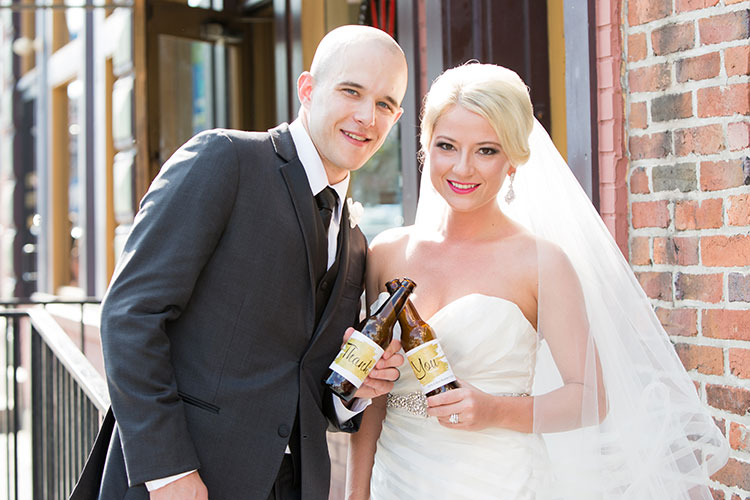