To coincide with the launch of our Spring 2016 Weddings magazine, we’ve created a Week of Wedded Bliss — seven stories to introduce you to the couples featured in our Real Pittsburgh Weddings. On Day Seven, we compile seven of our favorite moments. 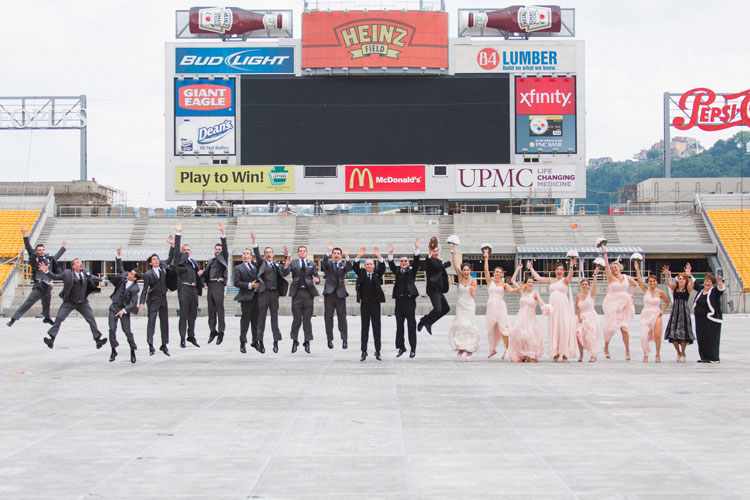 The day of your wedding is supposed to be one of the most memorable days of your life. You have been planning for months, working side by side with your loved ones and maybe a wedding planner to make your day exactly how you want it to be. This day represents not just the love between you and your spouse-to-be, but also your personalities and interests. From university marching bands to faux-football in tuxedos and dresses, these seven couples share adorable moments from their weddings that they will remember for a lifetime. 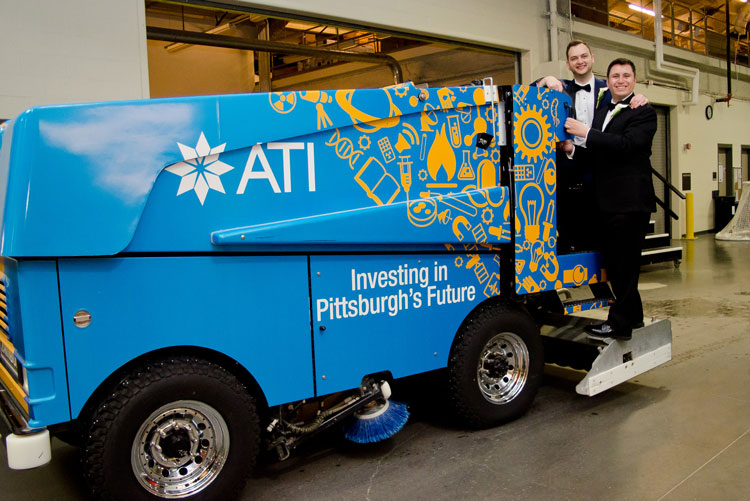 After Adam Knoerzer and Michael Marsico met while playing ice hockey and decided to get married, they knew that they had to incorporate their sport somehow. They decided to have their ceremony at the CONSOL Energy Center, where they were permitted to take pictures on the ice as well as the Zamboni.

“As huge hockey fans and players, it was obviously a thrill to get photos on the ice. The Zamboni was the icing on the wedding cake, so to speak,” says Adam. “In addition to us, the Zamboni driver also let a few other folks get photos on it. To thank him for being so gracious, we sent him down a tray of cookies.”

The story gets even better when Adam tells us about his interaction with one of our very own Pittsburgh Penguins. “Funny enough, I sat across from Sidney Crosby on a flight from Paris to Pittsburgh a month or two later and showed him a picture of us on center ice … which he thought was really cool,” Adam says. “He didn't know they even did weddings there. It's kind of a neat thing knowing that the best hockey player in the world has seen my wedding picture at his workplace. What a world.” 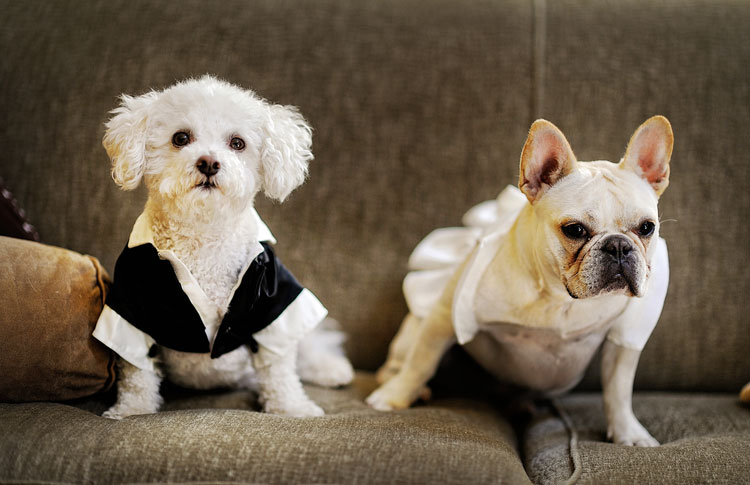 Home is Where the Dogs Are

For David Mizer and Carmen Ogrodnik, being a parent is a wonderful thing — a dog parent, that is. When we came across the pictures of their adorable bichon and French bulldog sporting a mini wedding dress and tux, respectively, we couldn’t help but mutter “awwww.”

“As true dog parents, we wanted our dogs to be a part of the wedding,” says Carmen. “However, our dogs were only in the photos we took at the house. They weren’t allowed at the church or zoo (where the couple held their reception) unfortunately.” Luckily they were able to snap this picture of Meeko and Pumpkin in their own wedding-inspired attire before they left the house. 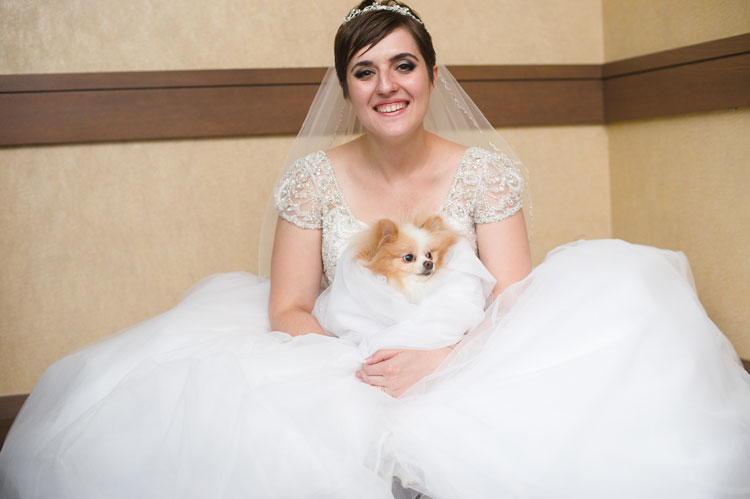 Julia Balacko and Jeffery Knopes knew that their wedding day wouldn’t be complete without the company of their Pomeranian, Talulah. “Talulah is truly a member of our family, and I knew I would be less nervous on my wedding day if she was there to supply cuddles and puppy kisses,” says Julia.

The Fairmont Hotel, where the couple held their reception, is pet-friendly and was more than welcoming to Talulah.

“While I was at my ceremony, Talulah was at the doggie spa getting ready; our family friend who is a groomer then brought her to the reception as her ‘date,’” Julia says. 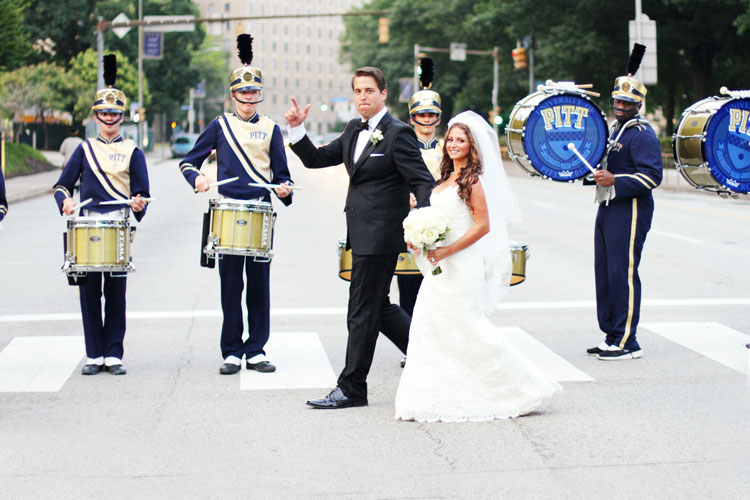 For their summer wedding, Danielle Piccolo and Anthony Roppa knew that they wanted to pay tribute to the University of Pittsburgh — where Danielle and her parents are alumni. The couple decided to have their wedding at Heinz Memorial Chapel and their reception at the University Club.

“My mom came up with the idea of having the Pitt drumline playing as everyone exited the chapel. Best idea ever,” says Danielle.

“The drumline played as everyone exited the church surrounding them clapping and dancing. The party started! The drumline led everyone across Fifth Avenue blocking traffic and over to the University Club. It was so much fun and a perfect way to get our guests really excited for the reception.” 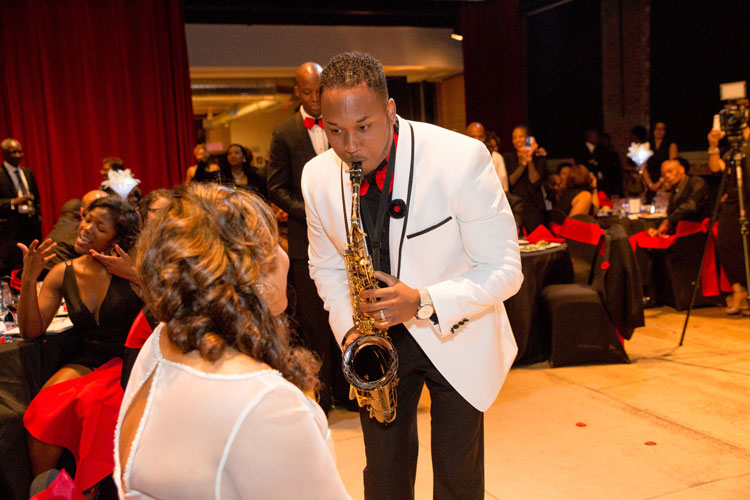 For their Pittsburgh-inspired wedding, Marisa Bartley and Eugene Williams wanted to include all-things Pittsburgh to show their out-of-town families many of the incredible aspects of their city — the food, the people and the live music. What Marisa didn’t know, however, was that Eugene had a little musical surprise of his own. He pulled out his saxophone at the reception and played “Anytime, Anyplace” by Janet Jackson.

“He said he was planning something, but I didn't know what he was going to do,” says Marisa. “I was completely red in the face when I realized the song he was playing.”

“I wanted to do something that would be special and different, says Eugene. “The significance is that the lyrics in the song say, ‘anytime anyplace.’ I wanted to honor those lyrics by saying it doesn't matter where we are, I will always show my love for [Marisa].” 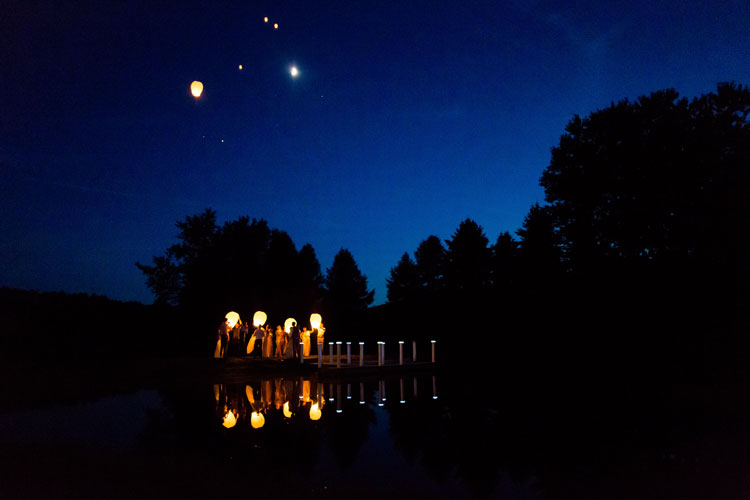 Lighting Up the Night

Ashley Cain and Ryan Burda wanted to do something special at the end of their rustic wedding reception, so they chose a lantern send-off. Their reception site, Shady Elms Farm, featured a small pond with a dock that lent itself to the perfect place to lift lanterns into the air.

“It was so meaningful to have our family and close friends send us off with well wishes as we embarked on our new journey as husband and wife,” says Ashley. 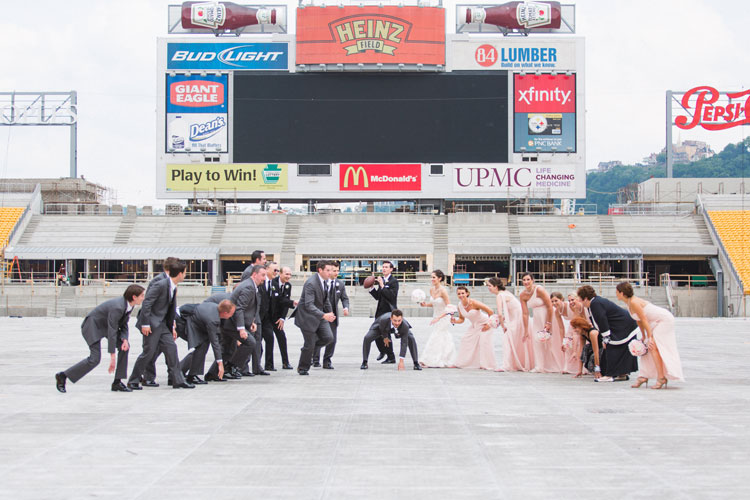 Bringing It Home to Heinz

Stephanie Szewciw and Patrick Yingling attended Pittsburgh Steelers’ football games throughout the course of their relationship.

Patrick, a life-long Steelers fan, couldn’t have been happier when he found out that before his wedding reception at Heinz Field, the bridal party would have the opportunity to take pictures on the turf itself.

“It was such an amazing experience to have the whole wedding party run onto the field through the tunnel where so many football legends have run,” says Stephanie. After they took their pictures out on the field, they were given the chance to relax and take more pictures in the Steelers’ locker room.

Read more about their wedding here.